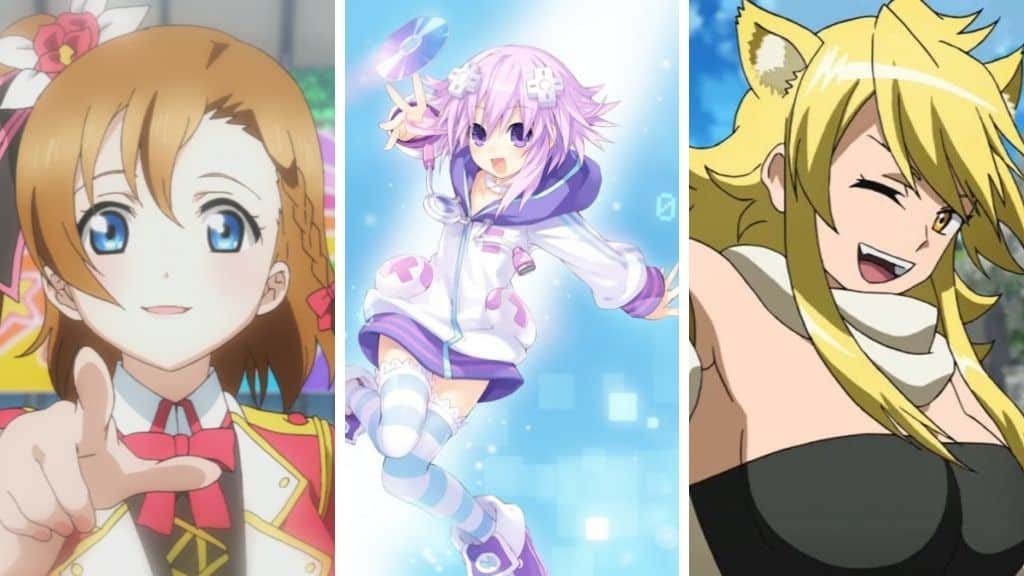 Watching a happy anime girl can fill your heart with immense joy.

In fact, #11 on this list has the supernatural ability to force a person to laugh uncontrollably.

And, the best part is that they are kindhearted, outgoing, and have very captivating personalities.

So if you want to know everything about these girls, you’ll love today’s post.

You would have a better chance of finding the holy grail than to find a soul more joyful and exuberant than Neptune.

Watching her talk to people makes you feel like she has never known anything but happiness from the moment she was born.

In fact, even her appearance is that of a winter maiden as is shown by her light blue hair and her dress consists of a lilac hoodie which has a purple lining on it.

Most of Neptune’s friends are in awe of her strong sense of righteousness which comes from her immense confidence in herself and her abilities.

If people had Honoka’s ability to always look at the bright side of things, depression might just cease to exist! Honoka is another happy anime girl that people aspire to be like because of her optimistic personality, her intense desire to never give up, and her fearless confidence.

In addition, she has long orange hair and shiny blue eyes that also portray her cheery personality.

On the other hand, Honoka is not as intelligent as she looks which is exemplified by her inability to score well on her exam to get admitted into Love Live.

Unsurprisingly, the reason for her bad grades is her passion for composing and singing songs at concerts with her friends.

Yachiru is what is commonly referred to as a ‘loli’ but the difference is that Yachiru is actually a lot older than what she looks like.

Thanks to her persona which is that of a 5-year-old, she is always busy causing mischief and infiltrating people’s houses to steal candy and hot chocolate.

Despite Yachiru’s toddler persona, she is the lieutenant of the 12th squad, and to translate that in plain English: she is super strong.

She possesses the ability of ‘Shunpo’ aka flash step.

Furthermore, Yachiru is so jolly and airheaded that even in the presence of a bloodied corpse, she is seen to be smiling and playing around with that sickening red liquid.

As one of the top 10 most popular characters in all of Bleach, she never fails to add humor into our lives thanks to her highly comical interactions with the serious and super-strict captains.

Ochaco is as adorable as a heroine could ever be.

Her empathy and kindness are so infectious that it is impossible to remain upset after watching her smile her way through life.

As a part of her jubilant personality, she has the bad habit of laughing uncontrollably whenever she sees somebody with a weird quirk.

Surprisingly, her bubbly persona changes into something more fierce and intimidating whenever she is in combat mode.

Always jubilant and lively, Leone specializes in gathering intel for Night Raid which might just be the strongest assassination squad in the anime world.

Her blonde hair is symbolic of a bright personality which can be seen when she is always over-friendly to her squadmates.

In one instance Leone can be seen shoving Tatsumi’s head into her large breasts as a way of showing her love.

Aside from duty, she likes to live life as freely and as carelessly as possible.

For example, Leone loves drinking enormous amounts of wine and alcohol without a care in the world.

She also has an ability that grants her a massive increase in speed and reflexes.

Leone is described as a beast when she activates her new form.

The most motivated character on this list is none other than the happy anime girl known as Mei Hatsume from My Hero Academia.

Mei’s stand-out characteristic is her endless obsession with inventing new weapons, armors, and other types of gadgets.

In fact, the happiness she gains from a successful invention is so immense, that at one point she began to call her creations ‘super cute babies’.

Mei’s friends are always startled by her electric personality.

Truly, the best thing about Mei has got to be her ability to fail and avoid being upset.

Her favorite dialogue is ‘Failure is the mother of invention’.

That alone should speak volumes about her ability to always remain cheery and confident despite the hurdles she has to face as a heroine.

Sometimes don’t you just wish you could convert your happiness into extra energy? Hajime is a girl who is not only boisterous, she is also very friendly and likes to greet people as loudly as she can.

The way she transfers her cheerfulness to others is definitely something to admire.

However, there are times this carefree attitude gets the best of her as her reckless spendings empty her pockets quite rapidly.

Hajime’s obsession with cute toys, models, and figurines are all traits of a happy anime girl.

Moreover, Hajime is a talented game designer as he works in the character department in Eagle Jump: A company renowned for making hit games.

Sitting on the throne of fashion is Yui Hirasawa thanks to her infatuation with fashion magazines.

Her doll-like appearance combined with her glamorous dress code has elevated Yui into a very popular rockstar.

What makes Yui a happy anime girl is her unquenchable thirst for fun and amusement. Thanks to this, she is absolutely fearless and dives headfirst into new activities and games.

I guarantee you that you won’t find another character on this list more lively than Mako.

She is very carefree which you can tell after you realize how unhindered she is by danger and atrocities that would send a shiver down your spine.

Mako can work very diligently if she has the proper motivation, but otherwise, she is quite lethargic.

Her most ‘stand-out’ trait is her over-friendliness. At one point, she actually began clinging to her friends.

Ritsu Tainaka is the guardian angel of the Light Music Club.

By successfully reviving the club, she and Yui Hirasawa have been able to produce awesome music time and time again.

As the president of the club, she ensures that everybody has loads of fun and has unlimited access to musical instruments.

But don’t let all her accomplishments fool you.

She still is a very upbeat young girl who loves to run pranks on her friends, blackmail people for money, and forget dates of important events.

Her ability to always look ahead and stay optimistic is something her friends really admire.

With certainty, the most muscular woman on this list is definitely our very own hero: Ms. Joke! Having Ms. Joke as a friend would be such a blessing because her supernatural ability is to make people laugh uncontrollably.

Thanks to her being such a happy anime girl, her students always enjoy her presence.

Funny enough, she likes teasing and flirting with her fellow colleagues such as Aizawa who is very introverted and stoic.

People really love Tooru because of her innate sense of compassion and her all-around ability to make people feel valued and appreciated.

Even if people mistreat Tooru, she holds no grudge and is ready to help them no matter how bad the situation is.

In front of her friends, Tooru is always cheerful and tries to lift their spirits as much as possible. In addition to that, she also has developed the habit of putting people’s needs above her own.

You would be quite hardpressed to find a child more family-attached than this little girl.

Himawari has an extremely kind personality which can be seen when she had gifted her favorite toy to a child who was a complete stranger to her.

Thanks to her cheerfulness, she is always eager to play with her older brother and likes to interact with wild beasts.

On the other hand, Himawari also has a dark side as exemplified by her chasing Boruto around the house in an attempt to punish him for ripping her doll apart.

From one of the highest-grossing manga comes Sasha Blouse who is a warrior trained to slash 50-foot titans.

Ever since Sasha was a young child, there was no way to survive without hunting for food.

And, because of all the training, she was able to constantly develop until she became the warrior that she is today.

Despite her rough upbringing, Sasha is an extrovert and loves joshing around with her buddies.

As the manager of the most prodigious basketball club in the history of Japan, Satsuki has an extreme passion to win and see her team reach the very top.

She is very friendly and uses her outgoing personality to try to make Aomine (the ace of the team) open up to her and be a little more extroverted.

In addition to her height, the other reason behind the misconception is the fact that she is as exuberant as a 5-year old celebrating a birthday party.

Popura works as a waitress at a restaurant called Wagnaria where people never stop assuming she is in middle school.

For that reason, Popura measures her height every day and prays that a day will come where she no longer has to raise her head up in order to speak with people.

Tsukasa Hiiragi is the exact picture people have in their minds when they think of a happy anime girl.

Although she is 16 years old, she is still very naive and dimwitted.

What’s surprising about Tsukasa is that despite being overshadowed by her twin sister’s brilliance, she is still more friendly and compassionate because of the fact that, unlike her sister, she is not an arrogant tsundere.

If there is something most of us struggle with, it is dealing with bad luck and misfortune.

That is why being like Anna is really important because she is always upbeat and optimistic despite the terrible misfortune she was born with.

Thanks to this joyfulness, people really admire her and wish to be like her.

Making her entry from America is Hana from Hanayamata! What popped Hana onto this list is her infectious boisterousness.

Hana is so ecstatic that it actually annoys some of her friends who don’t know how to react to her over-positive energy.

Last but not the least, Hana is very strong-willed as she hates giving up.

Misa is the only character on this list that is a prolific serial killer.

Even though she has the bubbliest personality in an anime filled with darkness and horror, Misa can be quite horrifying as she has no qualms taking the life of a man just to please her boyfriend named Light.

As a popular rockstar Misa is usually very outgoing and boisterous.

However, she is ready to give up her personality just to help Light reach his goals.

Which of these 20 girls would you like to meet one day?

Is it Leone from Akame ka Gill because of her attractiveness? Or is it Ms. Joke because you love the idea of laughing all night long?

No matter who you pick, be sure to let us know by leaving a comment down below.