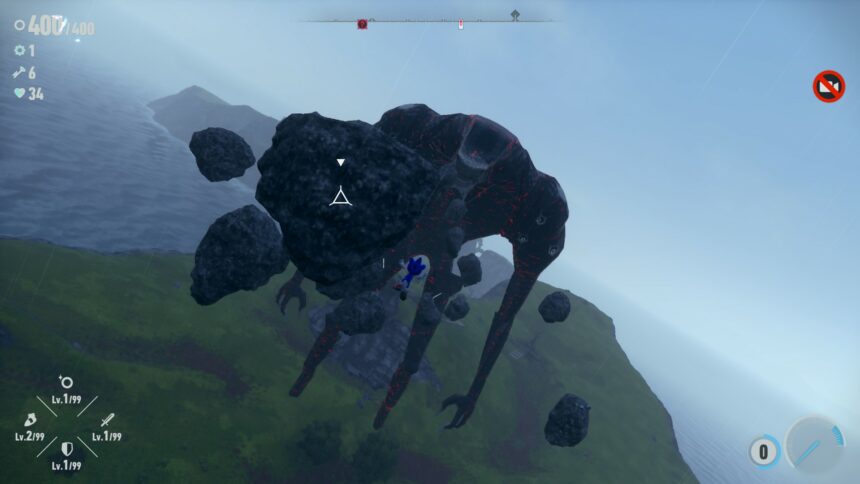 One of the best parts about Sonic Frontiers is the massive bosses that you can fight after collecting all the Chaos Emeralds. These boss fights have a grand scale and they truly feel epic. The first boss – or titan – you will fight in the first zone of the game is Giganto.

As the name suggests, he is a massive titan who deals a lot of damage. For a newer player, he is the perfect boss since he has easily telegraphed attacks. Plus, he is quite easy to beat if you know what you’re doing. That is why this guide will show you how to defeat Giganto in Sonic Frontiers.

Sonic Frontiers: How to Defeat Giganto, The First Titan

When you first face Giganto, he will be too powerful for you. After dealing no damage to him and getting attacked, Sonic will say that he needs to collect all the Chaos Emeralds. This is the main gameplay loop of all zones/islands. You need to gather Vault Keys, Memory Tokens, and complete puzzles.

Once you complete every main mission in a zone, you will have to fight a titan and move on to the next island. So, when you complete the missions on Kronos Island, you will climb up the waterfall and see Giganto roaming around in a large field.

At this point, Giganto will not be aggressive and he will not attack you. Instead, he is walking around in the field. To start the battle against him, you need to climb his legs and make it to his head. Make sure that you do not accidentally get stomped by his feet since they deal a lot of damage.

When you reach his legs, you will notice a few blue circles around them. You have to jump and hit these circles to go fast and run toward his head. Alternatively, you can climb his body slowly and make your way up. Since he does not attack you in this phase, you are not in any danger.

When you climb his body and reach his head, you will see the final Chaos Emerald. Interact with it and Sonic will channel his inner Goku and become Super Sonic. Now, you can finally fight Giganto and deal damage to him. Plus, you won’t take any damage while you are in this form.

However, keep in mind that your Rings will slowly get consumed. If they reach 0, you will get a game over screen. After you transform into Super Sonic, the fight becomes extremely interesting and fun. You can fly around the field and dodge his attacks while landing blows on him.

Even if you do not take any damage, Giganto will still swing his arms around and push you back. While this doesn’t do anything to you physically, it does waste a bit of time and lowers your Rings. Just like a Dark Souls fight, this battle has multiple phases once you reduce Giganto’s HP.

If he gets to almost half HP, Giganto will transform and have massive lasers on his back. If you get behind him, you will instantly get pushed back since these lasers damage you. So, you will have to stay in front of him and avoid his arms when he swings them.

Keep in mind that you can use all the skills that you have learned so far. The best skill to use is the Sonic Boom which allows you to throw your projectiles toward Giganto. It deals a lot of damage and you can essentially spam this attack since it does not have any cost. Just make sure that you avoid Giganto’s attacks.

During this phase, he also gets new attacks which you have to dodge. He becomes quite aggressive and will try his best to push you back to waste your Rings. Plus, there are new QTEs that make the battle even better and more intense.

Giganto will charge up his attack and throw a massive projectile toward you. When it hits, you will have to spam your attack button to push the projectile away. This makes it truly feel like a Dragon Ball battle – which is always welcomed.

Finally, when you reduce his HP to below 30%, Giganto will use a new attack where he will try to bite you. Just like the projectile attack, you need to spam your attack button and try to push his teeth away. Since he is the first main boss of the game, these QTEs and other attacks are extremely easy to avoid.

After you finally defeat Giganto, a cutscene will play where Sonic will fly through Giganto. This scene looks straight out of Neon Genesis Evangelion, and it is awesome! After the entire cutscene is over, you will teleport to the new zone and will have to repeat the entire process to defeat the next boss – Wyvern.

And there you have it, that is how to defeat Giganto in Sonic Frontiers. This boss fight is quite easy since he is the first boss. It is great for newer players that want to get the flow of how combat works against bosses in the game. Plus, fighting a massive titan as Super Sonic is extremely satisfying.

We would love to hear your thoughts about the game and this boss fight. Which fight is your favorite in Sonic Frontiers? If you would like to see more boss guides, let us know in the comments below!