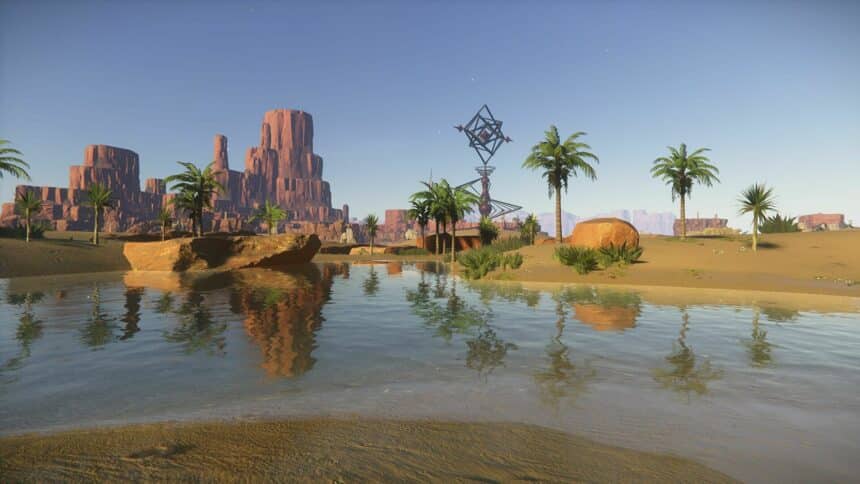 How to Drain the Water in Sonic Frontiers
SHARE

Once you enter the second zone – Ares Island – you will have to free Knuckles. After completing a couple of his missions, you will notice that your path is blocked by an oasis. At that point, Knuckles will ask you to drain the water so that you can progress.

It can be a bit confusing how you are supposed to do that since the game does not tell you exactly what you need to do. That is why we have made this guide to show you how to drain the water in Sonic Frontiers. With that said, let’s dive right in and get started!

Sonic Frontiers – How to Drain the Water

After you successfully complete the first few missions for Knuckles, you will come across a roadblock. If you want to progress further into the game, you will have to drain the water to move on. While the game gives you a slight hint of what to do, it might seem a bit confusing about how to drain the water.

When this quest starts, you will be standing in front of a large cannon. Sonic will claim that he needs something strong to shoot from the cannon to remove the plug. After the brief cutscene, you should climb the cannon and collect the Koco’s standing on top of it.

Once you have done that, look to the right of the cannon and you will spot a missile in the distance. When you reach it, you’ll notice that it cannot be interacted with. This is where the quest gets confusing. However, it is extremely easy since all you need to do is use your Cyloop skill.

If done correctly, the rocket will spin and fall to the ground. Sonic will pick it up and a timer will start. Worry not because you will have enough time to complete this quest without running out of time. Also, do not press the attack button while carrying the missile, otherwise, Sonic will drop it and damage himself.

Since you cannot use your boost during this time, you will have to walk the distance. However, the cannon isn’t far so you shouldn’t have any issues. Once you safely reach the cannon, you will notice a prompt appear that says “Load cannon“. Press your attack button and a quick animation will play.

After loading the missile, you will enter a first-person perspective and will have to aim at the huge stopper stone. By default, your cannon will be aimed at the random rock formation in front. Do not waste the rocket or you will have to reload the cannon by carrying the missile again.

Aim up until you see the stopper stone and shoot it. Once you hit it, the stone will turn blue and the chains will start pulling the plug out of the water; completing the puzzle. A cutscene will play showing that the water is completely drained and you will be able to progress further into the story.

That’s everything you need to know about how to drain the water in Sonic Frontiers. This is an easy quest that can be done quickly. However, I have seen some players struggling due to the lack of clarity in the game.

Hopefully, this guide assisted you in solving this puzzle and moving forward. We would love to hear your thoughts about the game and whether you managed to solve this puzzle in one go or not. Let us know in the comments which puzzle should we cover next!