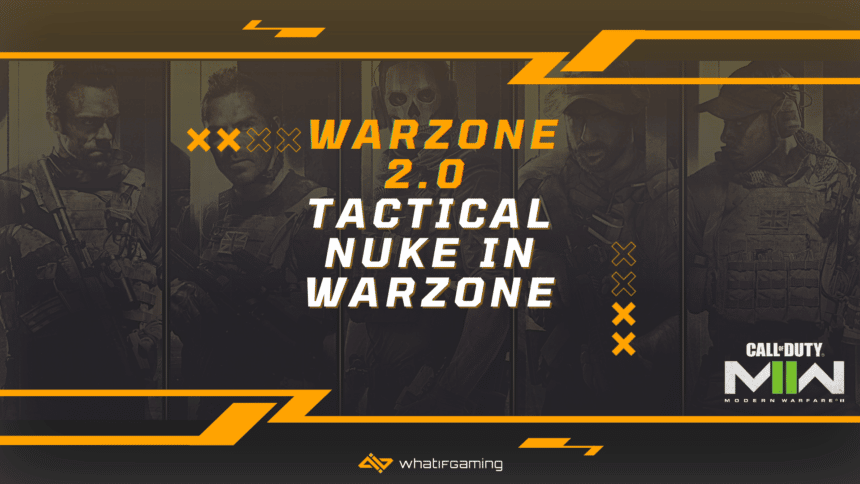 Call Of Duty Modern Warfare 2 features the all-new Al-Mazrah Map. In this guide, we will be looking at Call Of Duty: How To Get A Tactical Nuke In Warzone 2.0

Initiating the nuke is a long and challenging task, not everyone’s cup of tea. Therefore before jumping in, have a clear mind and a squad ready for what’s to come.

How To Trigger The Nuke Quest In Warzone 2.0

To trigger the nuke, you have to complete many challenges. It is not similar to the regular nukes you can initiate in normal game modes such as deathmatch, which can be triggered by reaching a kill streak of thirty kills.

To start the quest for the tactical nuke in the Al-Mazrah map, you must first get five consecutive wins in Warzone 2.0. After winning five matches in a row, the sixth match will grant you the Champion’s Quest contract, which will let you detonate the nuke.

If you think this is pretty challenging, you are in for a ride because this is just the start.

After you start the sixth match, the map will reveal three yellow Warzone logos, Go to any of the spots, and the quest will activate for you.

After which, you will see a splash screen say, “Assemble the nuke and destroy the warzone.”

This contract will have you complete certain objectives before the timer runs out, which is close to the match’s end.

Go to the marked area. There you will find the first element, Beryllium. Whoever picks the Beryllium up will be permanently marked with a golden Most Wanted crown for the rest of the match.

After you acquire the Beryllium, You will have to wait for the next element to be revealed on the objective meter. After the location of the second element is revealed, repeat the process to obtain Plutonium.

Whoever picks up the Plutonium will start to take constant damage until the end of the match. Plutonium takes away your armor plates slowly and damages your health. Keep in mind any teammate in close proximity will also be damaged.

After acquiring the first two elements, the objective meter will reveal the location of the third element. This element is called Tritium, which permanently scrambles the radar for the carrier till the match ends.

Much like the radiation damage, this will also affect any teammates nearby.

After you acquire all the three elements required for the detonation of the tactical nuke, you must wait for the bomb site to be revealed, which is revealed after the fourth circle is completed.

When you acquire all three elements. As a result, the game will start a Jailbreak public event, which will put all the dead, spectating enemy players back into the game in order to give them a fair chance of a comeback.

After completing the fourth circle, a plane will fly above the players and drop the bomb on the map.

It is marked as a nuke icon, and a 5-minute countdown will begin when the nuke appears on the map.

After reaching the location of the dropped tactical nuke, interact with it. Lastly, the missing elements will be removed from your inventory and placed into the bomb. After this, the game will remove all the negative effects you were getting from the elements. And a 2-minute countdown for the nuke explosion will begin.

After the 2-minute countdown begins, everyone on the game will be broadcasted its location. You have to defend the nuke from all attackers in that 2 minutes. Failure to do so will defuse the tactical nuke.

Do not panic if someone manages to defuse it because you will have two extra chances of completing the Champions Quest Contract. If you manage to fail the other two tries as well. Then the quest will be reset. And you will have to win five times in a row again.

If the 2 minutes timer has passed and nobody managed to defuse it. The tactical nuke will go off killing everyone remaining in the game and earning you the Champion’s Quest rewards.

Completing the quests get you and your squad a lot of experience. Furthermore, You’ll also get a particular Champion’s Domination victory screen and unique nuke-themed goodies such as a calling card, emblem, sticker, and weapon charm.

Tips for earning the nuke

Now that you know how to get the Nuke, here are some tips that let you get the detonation:

This was our take on Call Of Duty: How To Get A Tactical Nuke In Warzone 2.0.

This has already been achieved by Wagnificent and his squad on Twitch. Please let us know if you have any suggestions for improving this process. We are always open to suggestions. And are actively looking forward to feedback.