How to Get The Myriad Boomerang in Biomutant 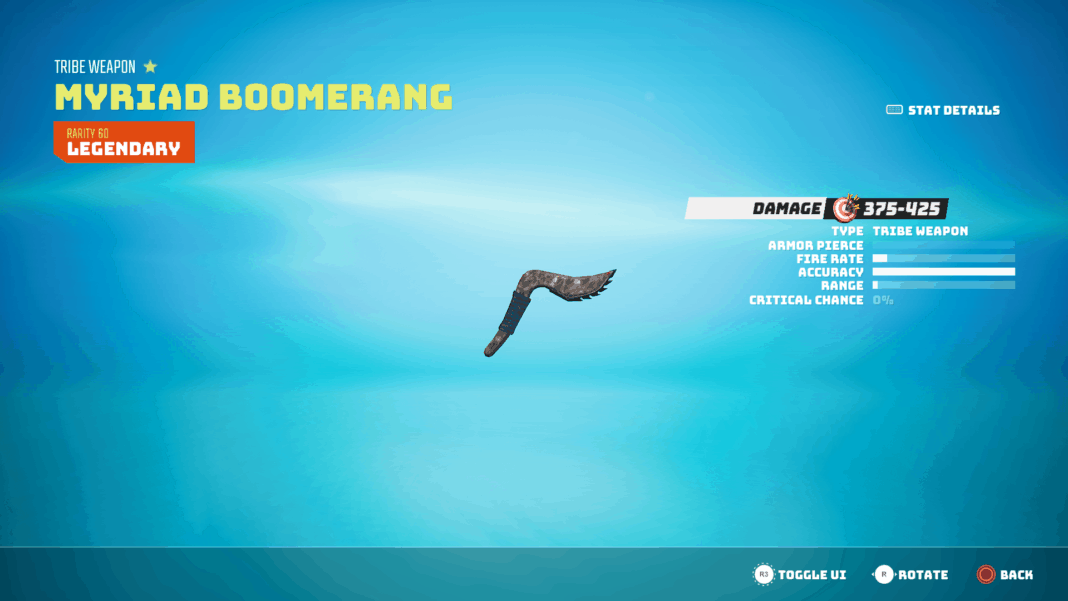 Working with an ally Tribe can get you some Tribe Weapons and items. Follow the guide below to find out how to get the Myriad Boomerang in Biomutant.

The Myriad Tribe is one of the six Tribes that inhabit the Biomutant world. The Myriad and the Jagni Tribes are the first two Tribes you encounter when you start the game. The six tribes fall into either Light Aura Tribes or Dark Aura Tribes.

The remaining three Tribes are Dark Aura Tribes, which are Jagni, Lotus, and Pichu. These Tribes want to let the Worldeaters destroy the Tree of Life.

A group of Myriad warriors will help you conquer the Outpost. You’ll have to head over to the Murkadorpus Outpost, which the Jagni Tribe controls. The Myriad will be waiting for you at the entrance of the Outpost.

After talking to the Myriad, the big Myriad will bash the entrance wide open. You’ll have to defeat three Jagni guards during the first wave of defense. Next, you’ll have to destroy two Boomhuts. The Boomhuts are turret-like things that launch explosives instead.

Next, you’ll have to solve a puzzle on the left wall to lower the sewage water. You’ll then have to swim across and activate the lever on the other side to allow your allies to cross.

Continue forward until you see some guards. They should be guarding a prisoner. All you have to do is defeat the guards and release the prisoner. After releasing the prisoner, you have a chance to either gain some Light or Dark Aura.

There should be a glass emergency box in the armory. Break the box and retrieve the rifle. This weapon can help you defeat the other enemies waiting ahead.

You will be greeted with a few guards and a sniper on a tower in the next area. You can let your allies distract the guards while you take out the sniper with your ranged weapon. Once all the enemies are defeated, a large enemy will be your final test.

The only way to defeat him is to make him charge into the wooden tower. To do this, you’ll just have to stand behind the wooden tower and dodge right before he charges into you. After a few charges, the tower will collapse, and he will be defeated.

The final thing you’ll have to do is push an explosive barrel near the door and shoot it to destroy the door.

Once you claim the rival Outpost, the quest will be completed, and this will now turn into an allied Outpost. The Sifu will thank you for your help and award you with the Myriad Boomerang. A few vendors and other Myriads will now inhabit the Outpost.

The Myriad Boomerang is a powerful ranged weapon in Biomutant. It has an orange Rarity 60 Legendary status and is a good early game substitute for your guns. The only downside is that it takes a while to come back, and it can only hit a few enemies at a time. It does deal some pretty hefty damage and can be a solid ranged weapon for a melee-heavy character.

To maximize the effectiveness, you’ll have to throw the Myriad Boomerang and then perform some melee attacks while waiting for it to come back.