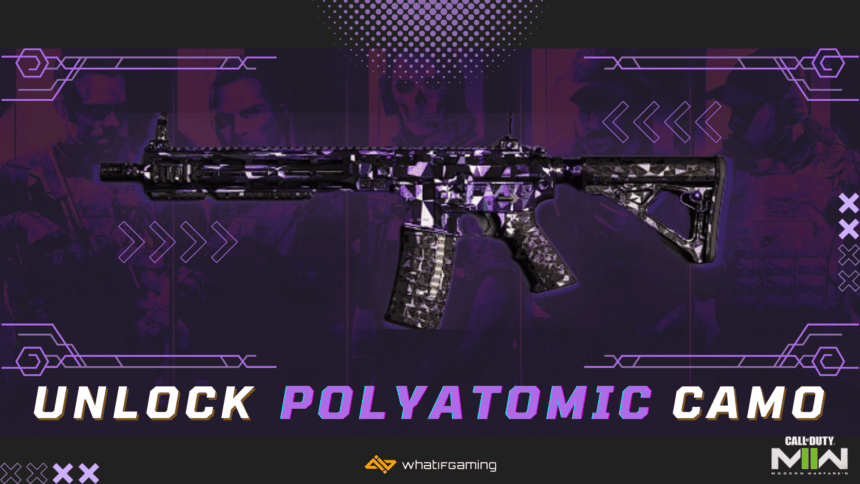 Modern Warfare 2 has a new camo system that is harder to grind than the previous installments of Call Of Duty. This guide will explain how to unlock the polyatomic camo in Modern Warfare 2.

How Do Camo Challenges Work?

Mastery Camos are unlocked by doing certain challenges of a weapon class. Once unlocked, you can use them on any weapon of the same category.

How Do You Unlock The Polyatomic Camo?

To Unlock the Polyatomic Camo, you have to unlock platinum on all weapons, which gets unlocked after you finish unlocking all the gold camos on all fifty-six weapons. Each weapon in this game requires different challenges before Gold and Platinum are unlocked.

The camo challenges for Polyatomic are listed below.

After the challenges are completed, head to the gunsmith panel, and select customize. There you will see many options. You have to select camo. After selecting camo, you will see mastery camos on the bottom left. Hover over the Polyatomic Camo.

Use WASD on the keyboard or your left stick, using a controller to move over to the camos. If they are grayed out, then that means they are incomplete. If they are colored, select it, and it will be applied to the weapon.

The best games modes to unlock the Polyatomic Camo are:

Grinding camo challenges have never been this easier before, thanks to Invasion. As the game adds bots to fill the server, you can quickly rack up multiple kills from them. They aimlessly run around the map.

Hardpoint is the best game mode for flanking as it regularly rotates the objective around the map. Thus, you are always on the run and on a lurk.

How To Equip The Polyatomic Camo

To Equip your Polyatomic camo, you first need to head over to the gunsmith page. After selecting the gunsmith panel, press on the panel above, saying customize.

Here you will see many options, Select camo. After selecting camo, you will see the newly unlocked Polyatomic camo. Hover over the camo and select it. Now you can repeat this process for all the weapons.

And this was our guide on how to unlock the polyatomic camo in modern warfare 2. Please comment below if you have any tips and tricks you want to share with us. We would love to have your feedback.