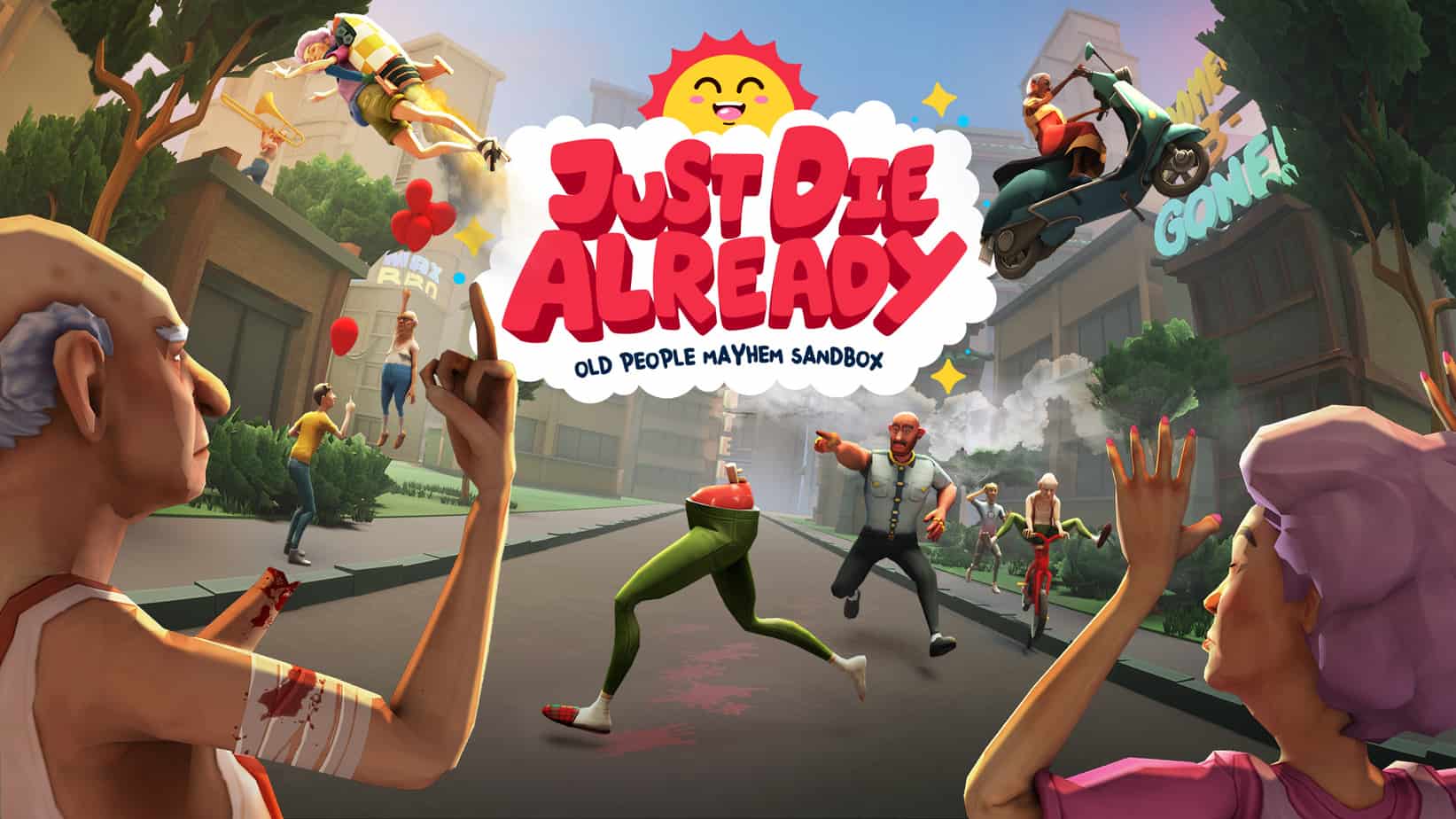 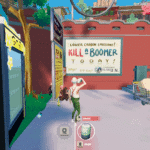 Octodad and Goat Simulator did something to the world. There’s no saying whether that’s a good or a bad thing, but we know we can no longer go back. So, it is no surprise Curve Digital, the publisher of countless ridiculous games, is banking on another wonky physics simulator. Just Die Already is to gerontophobia what Goat Simulator is to capraphobia – there, you learn two new words today. It’s a lot of mean-spirited fun that goes nowhere, and that’s completely fine. With that in mind, let’s transition to a not-too-detailed Just Die Already review.

Just Die Already Review: What Is It?

If not for its predecessors, Just Die Already would be impossible to describe. But what it is, is basically Goat Simulator with a vastly different map, senior citizens instead of goats, and opposable thumbs to hold a wide array of weapons and tools.

To start the game, you pick your pensioner, get kicked out of your elderly home, and then proceed to hit your bucket list before you hit the bucket. It’s simple and chaotic and that’s all part of the fun. Once out on the street, you have the option to complete bucket list items that unlock wacky items and weapons that you can get at vending machines. But, there is no real or intended progression. Just do what you feel like doing – hold people hostage, jump off the tallest building, or get into areas that shouldn’t even be possible, whatever.

The controls are simple with a button for either of your hands to grab or hold things and another two to use said items. In my case on PC, it was Q and E for the left and right hand respectively with each mouse button being the “use” key if the item is usable.

You can collect tickets, unlock items, and finish your bucket list for a special prize. However, the point of the game is to have fun in any way you want- with friends or alone. For this Just Die Already review, I played the game on PC alone for a good amount of time but I never 100%’ed the game.

One of the things that make Just Die Already a lot of fun is that it sets you up for no expectations. From the get-go, you may glitch into the fan in your “tutorial” room, but respawning costs you no time or currency. Exploring the game is fun, and being open to having fun is fun.

I really tried to play this game with a friend or two, but no one was interested in a few hours of mindless fun. However, I’m glad I went solo because this way I was able to really appreciate how much content the developers put into Just Die Already. The map may not be the largest, but it is doubtlessly dense.

As a game that expects players to not play by any rules, Just Die Already has left nowhere you can go without details. I was pleasantly surprised multiple times during my playthrough when I would climb up rooftops and balconies only to find hidden details and items stashed there for me to fiddle with. If there was enough content to keep me finding new details hours into the game, there will be more than enough for anyone playing in a party.

Different enough to be fresh

I keep likening the game to Goat Simulator, but I don’t do that to say it’s a carbon copy. I do that because there is literally no other way to describe the game. Just Die Already has enough new ideas and gags to make it stand out on its own. Yes, the concept is the same but not every platformer is a clone of Donkey Kong.

I particularly enjoyed the vending machines that littered the city. It meant that everywhere I went I could cannonball myself onto the top floors instead of drag items from all the way over to where they spawned. I also liked seeing my character progressively get dismembered while still being able to use any remaining limbs. Most weapons, effects, and items you can get are also varied and a lot of fun.

I realize that I talk about the controls in almost every review I write. But hey, bad controls are practically a death sentence for most games. Luckily no sentences are passed here because the game has simple yet floaty controls that perfectly match the gameplay they serve.

During my gameplay, I never had to input ridiculously precise controls to do what I wanted. There is a lot of leniency of when and how you grab onto items and that’s the way it should be. Additionally, without these controls I could not have enjoyed the items nearly so much.

I can see some people getting offended over the subject matter of Just Die Already. However, I will not go there. That’s mostly because I can’t take a game this silly that seriously, but also because it has other more grievous flaws.

One thing I am deeply disappointed in about this game is the humor. Maybe it’s because of my expectations – coming from Goat Simulator. But, I found the jokes in this game to be resoundingly “meh”. The game’s entire humor can be summarized as “haha, boomer”. It’s childish to a fault, unnuanced, and just plain boring.

Yes, stepping onto a manhole that launches you to a minefield that blows you out of the park and squarely onto power lines is hilarious. However, in way of outright humor the game is about as funny as “Jack and Jill”.

I praised the game’s amount of content earlier, and I stand by that. I kept seeing new items and areas as long as I played. But by the end of my last session, I was not too interested to keep playing despite otherwise excellent content.

The worst offender was the bucket list. The only thing that gave some structure to the game was executed poorly. I imagine this would have been alleviated if I were playing in co-op, but I was not and I was stuck with a boring achievement list.

At one point, when the exploration was secondary and hitting objectives was my reason for playing, glitches became too much to bear. Glitches are funny, no doubt. My old man’s limbs flailing around for no reason once in a while was great screenshot material. However, when I started stacking crates to reach high balconies, I did not appreciate my character (and the crates) flying into space for no reason.

All in all, I had a lot of fun during the journey leading to writing this Just Die Already review. The developers of this game put a lot of love into it, despite what it tries to show off. Loads of content, fresh ideas, and smooth (as smooth as it could be anyway) controls make this game a delight.

However, Just Die Already is by no means perfect even for its chaotic genre. Expect a lot fun, expect it wear off prematurely, but embrace the journey anyway; it is worth it.

I played the game on Steam to be able to write this Just Die Already review. But, if you’re interested you can also check the game out on PS4, Xbox One, and the Nintendo Switch.

This review is based on the PC version of Just Die Already. The key was provided by Curve Games 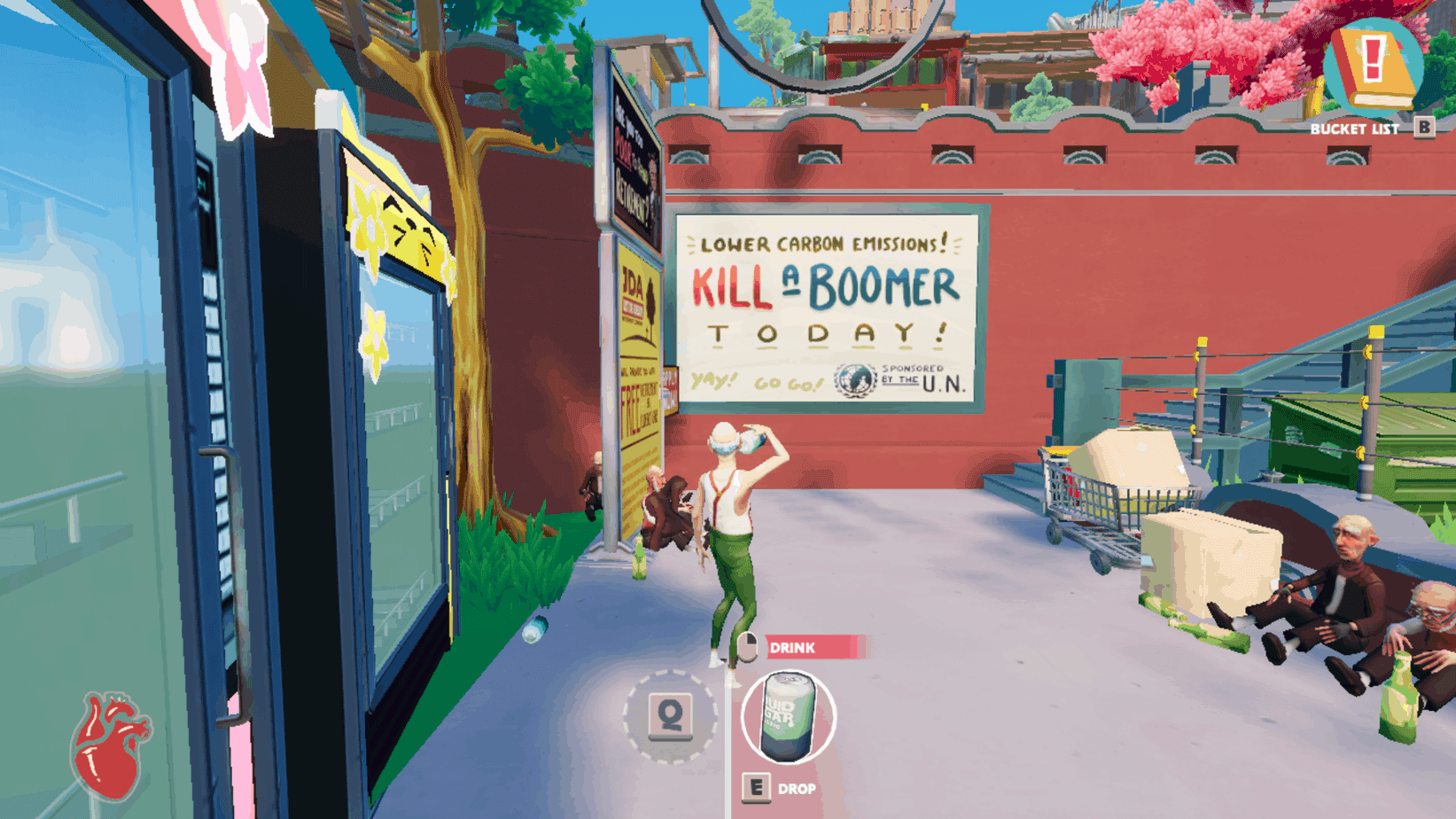 Review Overview
Above Average 6
Overall Score 6 out of 10
Summary
Just Die Already is a fun game with a lot of content and potential for a good time alone or with friends. It is by no means perfect and will probably get boring sooner than you want it to, but it's still worth enjoying for a good few hours.
Share this Article
Facebook Twitter Email Copy Link Print
What do you think?
Surprise0
Love0
Sad0
Happy0
Sleepy0
Angry0