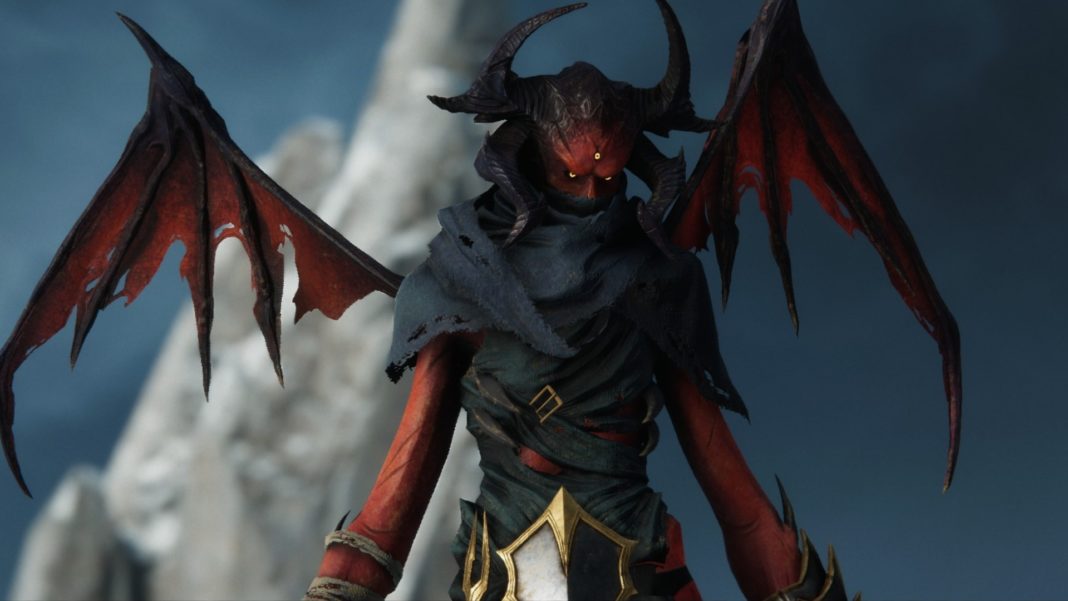 Metal: Hellsinger is a rhythm FPS brought to you by The Outsiders and Funcom. The game gives us a great mix of Doom vibes and Beats Per Minute (another indie game) and it’s backed by popular metal artists like Serj Tankian from System of a Down. In our Metal: Hellsinger First Impressions, we take a look at the new demo.

Go on an infernal journey and slay hundreds of demons while seeking vengeance. After over an hour of playing the demo copy, it looks like this has the potential to blow up (no pun intended).

There’s a good reason why this game was hyped in last year’s Game Awards and it has received a great reception from the audience, especially metal fans.

The moment the splash screen loaded, I honestly felt that the game feels graphically polished. Even putting the settings at low the presentation feels brilliant. The closest game that I can really think of while playing Metal: Hellsinger is Bullets Per Minute (BPM).

Don’t get me wrong, BPM was a good introduction to the rhythm FPS genre last 2020. However, if you’re gonna think of getting BPM now over Metal: Hellsinger despite its huge number of positive Steam reviews, I’ll say just get Hellsinger instead because the metal artists who’ve backed this game alone are already a big upside.

Even if I’m only playing with a built-in GTX 1060 on my laptop, the performance that I got from playing the game felt smooth.

Metal: Hellsinger definitely delivered by providing us with great hellish visuals without really straining my eyes. Actually, comparing this game to Bullets Per Minute (and ULTRAKILL), I’m seeing myself playing longer hours comfortably in Metal: Hellsinger.

I also like how the level design and overall environment look. Although the game gives us a disclaimer for people with photosensitive eyes, the devs did a good job of balancing the colors. Sure, I would get the occasional strain but not that harsh compared to the other bullet hell games that I’ve played.

The gist of playing Metal: Hellsinger is that you’re pulled into a specific area and you have to creatively kill all the demons in the area while listening to the music on the beat.

Metal: Hellsinger starts off with a tutorial which is enough for you to learn the mechanics quickly.

You’re presented with a variety of weapons to choose from. Slice and shoot your way to vengeance while headbanging to the metal tunes. Chain unique combos to get a higher score. However, take note that if you die in the middle of the run, you’ll get a score deduction.

Based on my playthroughs, completing one level can take you around 15 to 20 minutes (at least for the Stygia level that was shown in the demo) depending on how fast you clear through demon hordes.

We did mention at the beginning of the article that the team put together a lot of artists. I’ve barely dipped my toes in the metal scene but here are the other people behind the game who may sound familiar to you according to this Steam news article put out by the team.

The music starts out with only the instrumentals playing in the background. Once you’ve hit the maximum fury meter (16x), that’s the moment that you’re gonna hear the vocals and this is where the game’s immersion shines.

One minor issue that I observed while I was playing the demo copy was the audio sometimes gets garbled. I tried replaying the level but the audio didn’t normalize. So I ended up closing the game instead and restarting my Steam and everything went back to normal.

Again, it’s not really a game-breaking bug but I’m sure the team will have a fix once it officially comes out.

The first level that I got from playing the demo copy of the game actually got me hooked already. Although procedurally-generated maps are becoming a trend nowadays, Metal: Hellsinger never felt repetitive.

You’re challenged to be on beat while running, dodging, and slaying demons and that’s where the game shines in my opinion. Even though we’ve seen other titles pull it off the first time like Bullets Per Minute, I felt like Metal: Hellsinger did everything right.

Meshing the audio, visuals, and gameplay was certainly a treat. The game also comes with a leaderboard to keep you competitive.

Although I’ve barely scratched the surface after playing for over an hour, I feel like this game has a lot of content to look forward to. As an avid shooter fan and a casual listener of rock and metal, I’m excited to see where Metal: Hellsinger will go once the game releases.

Some people over at YouTube have been dubbing this game as “Doom: The Musical” which I have to agree with.

We hope you enjoyed reading our Metal: Hellsinger first impressions. Don’t forget to buy or wishlist this game on Steam, PS5, or Xbox Series X/S if you want to explore the world of rhythm FPS. Watch the raw gameplay video and you’ll be convinced that this metal game is worth getting.

What did you think of our Metal: Hellsinger First Impressions? Are you excited about the upcoming title? Share your thoughts in the comments below.