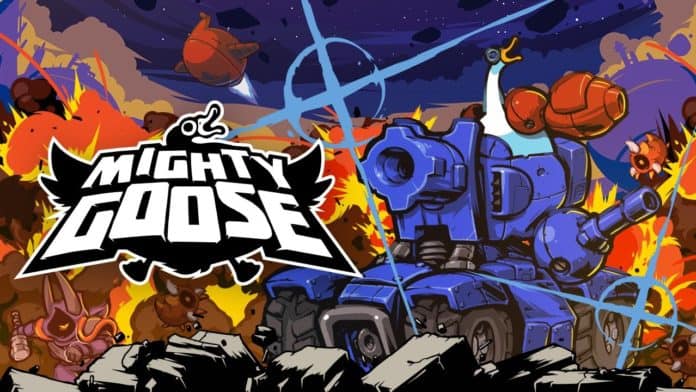 Mighty Goose is a fast-paced run & gun shooter from Blastmode and PLAYISM. It stars a Bounty Hunter Goose, who not only honks but uses a vast array of weapons to cause extreme havoc on its foes. The title wears its influences on its sleeves but adds enough modern systems to make it stand out. In our Mighty Goose Review, we will talk about why this is one of the best run and gun games of the year.

Mighty Goose at its core is an arcade shooter, and typically you won’t expect a lot of dialogue in these games. However, there’s a surprising amount of dialogue in this game, and it works well for the most part. Few characters communicate with the main character, usually through comms or the ones you rescue. It’s a nice touch and something that gives the world a bit more character.

None of this is too overbearing, and doesn’t ruin the pacing in any way. Most communication is relevant to the mission you’re on, and there are a few jokes sprinkled throughout.

This is the highlight of our Mighty Goose Review. There’s no doubt that the game is heavily inspired by the seminal Metal Slug series, and there’s a lot to like here. You will be going through areas, shooting down enemies, and get better weapons as well. The shotgun especially feels excellent and is the most satisfying weapon in the game. Other weapons are impactful as well, and you will be swapping through multiple guns in each area.

Unlike Metal Slug though, the Goose here has a lot more mobility. You can dodge roll, shoot in multiple directions, and move around effortlessly. The controls are responsive, and tight, whether you’re on a controller or keyboard. Players can also access the armory to equip secondary weapons. Some of these are definitely better than others, but there are enough to allow for experimentation and add to the replayability. On top of that, there are upgrade chips that players can manage, which add passive bonuses, further allowing you to customize your Goose.

There are vehicles to control as well, similar to Metal Slug, and those are a joy to move around in, especially when segments of the level are designed around those.

The Goose can also bring along companions that give passive bonuses, and at times fight with you. Players will have to visit the armory every time they want to make adjustments to their build. The “Mighty Mode” allows you to do a bunch of damage, and it charges up the more successfully you take down enemies, and increase your combo count.

Sadly, this brings us to where the game struggles, and that is primarily with the enemies. While the base enemy grunts are well designed and pose a challenge, there is simply not enough variety. Even the bosses aren’t as interesting, or varied barring some exceptions. This, coupled with the fairly basic level design makes the game a bit repetitive. Thankfully, the game doesn’t overstay its welcome, and you can finish it in a few sittings.

Mighty Goose features some striking visuals because of its pixel-art. There is a lot of detail in the main character, weapons, companions, and most enemies. While the backgrounds aren’t as detailed as we’d hoped, there’s at least enough variety. Weapons are well animated, ammo-caps fly off walls, and there’s a lot of attention to detail when it comes to what’s happening in the foreground. At times I did feel like there was so much going on-screen that it was a bit hard to follow the action.

The soundtrack is constantly engaging, and there are enough tracks to support the mayhem on-screen. Guns sound crunchy, and the Goose’s honks are hilarious, especially when used as abilities.

Mighty Goose is a fantastic run and gun shooter, with tight controls, a variety of guns, and secondary abilities. It features some excellent pixel-art, with a fairly memorable soundtrack, and doesn’t overstay its welcome. However, it’s brought down by a lack of enemy variety, and uninspired level design. Highly recommended for fans of the Metal Slug series, and classic 2D shooters.

Be sure to check out our other reviews, for Mind Scanners, Retro Machina, and Resident Evil Village. You can add Mighty Goose to your Steam wishlist at the following link.

What did you think of our Mighty Goose review? Are you excited to check out the game for yourself? Share your thoughts in the comments below.

This review is based on the PC version of Mighty Goose. The key was provided by PLAYISM

Ali Hashmi
Gaming enthusiast, massive soulsborne fan, and a passionate writer. Always on the lookout for interesting games with unique mechanics and design. He loves to write informative guides for newer and ongoing releases.

Load more
Mighty Goose Review - There's a new Goose in TownMighty Goose is a run and gun action shooter inspired by the Metal Slug series. It features tons of gameplay variation, fantastic pixel-art, and an engaging soundtrack. It's action-packed, with tight controls, and doesn't overstay its welcome.
Tech