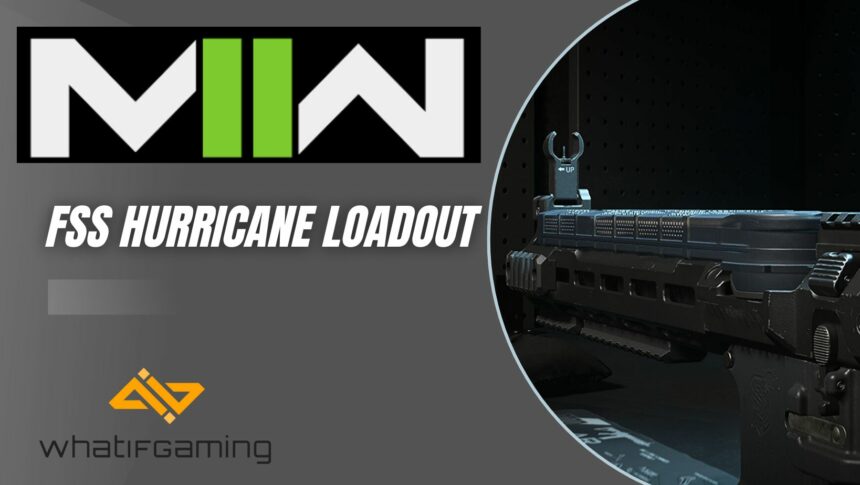 If you are a fan of SMGs, you will absolutely love the FSS Hurricane. It is the final gun in the M4 tree line, so, you can expect it to be quite good. If you have been playing Call of Duty for a while, you will know that this gun can get you kill streaks easily. That is why we have made this Modern Warfare 2 best FSS Hurricane loadout guide just for you!

While holding the FSS Hurricane, you should try to play aggressively and try to push the enemy back. That is why we will show you to required attachments and what perks will help you the most. With that said, let’s dive right in and check out this Modern Warfare 2 best FSS Hurricane loadout guide.

How to Unlock FSS Hurricane

In terms of SMGs, the FSS Hurricane has some of the best stats that you’ll see. It has a lot of damage and a swift fire rate as well. However, since it is an SMG, the range isn’t the best. Your damage will start to fall off the further the enemy is. With this loadout, you will have increased accuracy and recoil control.

This loadout will primarily focus on improving the accuracy, damage, and recoil control of the FSS. Since it is already a great SMG, increasing the stats that it was lacking will allow you to perform much better. With this gun setup, you will be almost unstoppable at close range.

However, keep in mind that the range isn’t the best since the FSS is an SMG. So, you should carry another primary weapon but we will talk about that in the Class Setup.

Note: All image credits in this section go to ItsDawson

Since this gun has a low range, this barrel will help you slightly increase it. So, you will deal more damage to targets that are a bit further away. Plus, it also gives you better hip fire accuracy and enhanced bullet velocity as well. However, the hip fire recoil control is reduced a bit, so keep that in mind.

The FTAC Grimline Laser is a good laser that increases your sprint-to-fire speed and gives you more hip-fire accuracy as well. Since your barrel reduces your hip recoil control, this laser will help you have more recoil control to counter that.

The only downside is that the laser is visible which can sometimes give your position away. However, since you will be running around, it doesn’t matter if your position is known to the enemy or not.

The Phase-3 Grip underbarrel gives you more aiming stability and better hip fire accuracy to ensure that your bullets hit the targets. It also gives you additional recoil stability which is a much-needed stat for any SMG. However, you will have a slightly reduced walking speed and a slower ADS speed as well.

The Demo Quicksilver Stock is a lightweight item that allows you to sprint faster. Plus, it also increases your walking speed while you are aiming. This means that you can have a run-and-gun play style without any issues. The Demo stock also increases your crouch movement speed and ADS speed as well which is always a welcomed addition.

Usually, you need to play a very aggressive and fast play style when it comes to SMGs. So, the XTEN Grip will allow you to have a better sprint-to-fire speed and a much better ADS sight as well. You will quickly be able to fire your weapon after sprinting thanks to this.

Moving on to the class setup, we will show you what perks and grenades perform best with the FSS Hurricane. Since it requires a fast-paced gameplay, we will be picking perks that allow you to run faster and have more map control.

The FSS Hurricane is one of the best close-range SMGs with a lot of damage and fire rate. However, the damage really falls off the further the enemy is. So, to counter that issue you should carry the FTAC Recon as your secondary. This combo will allow you to be a massive threat in both the close ranges and medium ranges as well.

You will notice that we suggest Overkill for most loadouts. This is because it is one of the best perks that you can take right now. Overkill allows you to carry another primary weapon in your secondary slot. While you won’t always need it, having a second primary weapon is always a good thing.

The FSS Hurricane is a great gun with tons of damage at close range. However, if you want to fight targets around the medium/long range, you will want to carry the FTAC with you. Otherwise, the damage fall off from the FSS will make you lose tons of kills.

This is one of the most essential perks if you want to do well with the FSS Hurricane. Since you will want to play as aggressively as you can, having Double Time will allow you to sprint around the map quickly. This perk increases your sprint speed and duration. So, having additional mobility is always a welcomed stat.

Fast Hands gives you a lot of momentum as you can swiftly change and reload your weapons. You will want to spend every second fighting the enemy without a lot of downtime in this SMG loadout. Plus, since you will be carrying two primary weapons, Fast Hands will allow you to quickly swap between them.

Carrying the Frag Grenade as your lethal with this loadout is a great idea. If you see an enemy hiding behind cover or camping, you can throw your grenade to flush them out. When they are running out of their position, you can spray your FSS and get a free kill.

Dead Silence is a great Field Upgrade to have since it reduces the noise you make while walking or sprinting. This will help you remain hidden and get the jump on your target. Since you do not have any other perk that helps you stay hidden, Dead Silence is a must-have.

Now that we have looked at the best loadout for the FSS Hurricane, let’s talk about some of the tips and tricks that you should use. We will briefly talk about the play style so that you can maximize your output and get tons of kills with the FSS.

Run Around the Map

This loadout requires a lot of running around the map and playing aggressively. You need to make sure that you keep moving. Since you do not have any perks that keep you hidden from the enemy UAV or radar, you will want to move around to avoid getting attacked.

Plus, try to fight enemies in tight spaces rather than open fields where they have a lot of space to move around and keep their distance.

The best part about using an SMG is that you do not need to worry about having a precise aim. You can spray your bullets and still get a kill since your fire rate and damage are insane at close range. So, don’t always try to go for headshots. Even if you land a few bullets to the torso, you will get the kill.

Do Not Pick Long-Range Fights

Finally, whatever you do, do not pick long-range fights. Since your SMG does not deal a lot of damage to far-away enemies, you will want to fight them at close range. While you can whip out your FTAC Recon, I suggest trying to get as close to the enemy as possible.

And there you have it, that is the Modern Warfare 2 best FSS Hurricane loadout and class setup. If you are a fan of SMGs, this gun is made just for you. So, try out this loadout and you will notice a massive increase in your damage and accuracy.

Hopefully, this guide helped you find the ideal loadout for the FSS Hurricane. If you have a better loadout that you are using, let us know in the comments below! We would also love to hear your thoughts on this loadout as well.