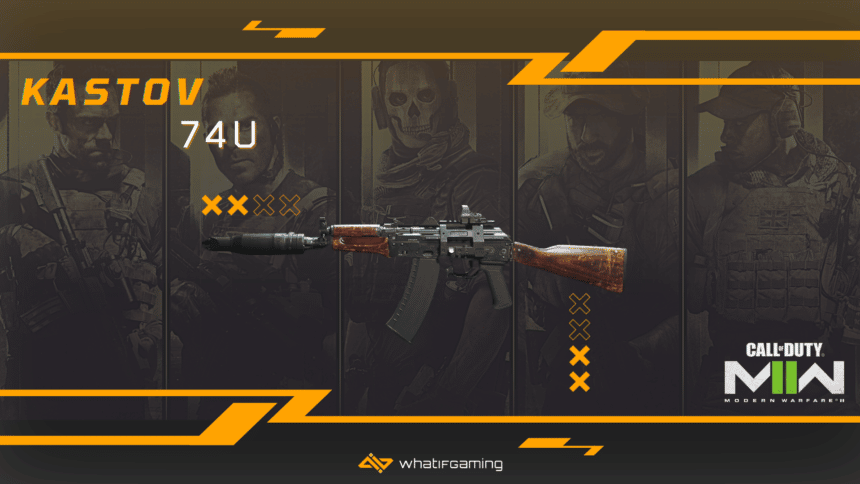 Modern Warfare 2 Multiplayer has recently dropped, and players are looking to maximize their chances of being at the top of their game. To reach the top of every scoreboard, you must have your loadouts checked. We have curated this in-depth guide focusing on Modern Warfare 2 best Kastov-74U loadout, class setup, and attachments.

The Kastov-74U is an excellent gun with good damage and a steady firing rate. Comparing it to the FTAC-Recon, it lags behind in terms of recoil control, but that can be improved by using attachments. It can usually kill an enemy in three or four hits. We will show you every step you can take to increase your potential, from perks to tactical grenades and attachments.

So let’s get into it and check out the Modern Warfare 2 best Kastov-74U loadout.

How to unlock the Kastov-74U

To unlock the Kastov-74U, you have to upgrade your Kastov-545 receiver to level 13, after which you will automatically have access to the Kastov-74U receiver. Now let’s dive into the best Modern Warfare 2 Kastov-74U loadout.

Having the perfect gun setup takes time and practice, continuously changing and optimizing attachments that work best when paired with each other, which can quickly become overwhelming. The loadout mentioned below will let you skip all that fuss and jump directly into the game with the best Kastov-74U loadout available.

With this setup, your play style will be aggressive, with all guns blazing, as being stealthy with this gun is pretty useless because it is practically an SMG, which I will explain in depth later on.

The Kastov-74U is an Assault rifle, but it works like an SMG. It has low damage compared to other Assault rifles and a higher recoil. But due to its SMG-like characteristics, it has a high rate of fire. Even though it uses 5.45 rounds, it still faces high recoil due to a higher rate of fire, so we will use attachments to reduce the recoil and slightly modify the damage.

To fully maximize your Loadout, you need to take your Kastov-74U to level 21, which will unlock all the needed attachments.

The Cronen Mini Dot is an optic designed to be used on run-and-gun setups with SMG-like guns in mind, as it is a small red dot sight with an unnoticeable frame and clear sight picture helping you net clean kills.

The Ivanov Wood Stock is a heavy stock that provides steady aim while being on the move, and it is created with aiming stability in mind. However, as it is a wood stock, it reduces your walking speed.

If you have been following my loadout guides. In that case, you already know that this Corio Laz-44 V3 laser is my favorite. It is one of the most easily obtainable, especially for a beginner, and has the best stats. It provides good ADS speed and stability. One drawback is that it can reveal your location to the enemies whenever you are aiming down the sights as the laser beam is visible.

The Gauge-9 Mono is a heavy silencer created with heavy sound suppression in mind, as it can help you with quiet kills that do not reveal your location. In terms of its positive points, it increases the bullet velocity and smoothens the recoil. Although it takes longer to reach ADS and overall movement speed is slower.

The 5.45 High-Velocity rounds are designed to increase Bullet velocity, allowing for greater recoil control, while slightly decreasing the damage. These are my favorite, as the base damage of all Kastovs is already great. What is missing is recoil control, which this ammunition fixes.

Now let’s talk about our class setup. With this setup, you will use two primary weapons, flying guns ablaze. Your reload and weapon switching speed will increase, allowing for greater loadout control.

In terms of your secondary weapon, you will be carrying a shotgun. Thanks to your main perk, the Expedite 12 will help you destroy your opponents whenever your main gun runs out of ammo because switching to the other weapon is always faster than reloading.

The Overkill perk allows you to have two primary weapons on your loadout compared to having a main weapon and a secondary pistol. Two primary weapons change the playing field, as you will consistently outplay the enemy instead of you getting killed.

If you run out of ammo in your primary weapon, then instead of reloading, you can immediately switch to your secondary shotgun or your favorite weapon of choice, and the opponent that is charging towards you will be in for a surprise.

The Double Time perk is my favorite, as it can allow you to run faster and for longer, which helps you be on the move and advance on the enemies. They’ll never be able to catch up to you. This can be beneficial whenever you are trying to chase an enemy. Not to mention it also increases your movement speed when crouched by 30%

The Fast Hands perk allows you to have a faster reload time and use equipment more quickly. The less time you spend reloading and shifting weapons, the more vulnerable you are to the enemy.

Reducing that time means you have a higher chance of winning. It can be very tiresome when someone pushes you, and you are either reloading or changing your weapon.

Ghost is the best Ultimate Perk available, as it can mask your presence on the minimap. Even shooting can not reveal your location when this perk is equipped, which can be very beneficial to a run-and-gun build, as you can be rushing every room without them ever knowing you are there. This can help you rack up Killstreaks quickly.

The Drill charge can be very deadly when used properly because the primary purpose of it is to shoot grenades through walls. That can be very helpful if you aim to clear a room with campers inside. You can shoot the lethal at the wall, and it will deal with the residents inside.

The Flash Grenade deserves no explanation. It is quick, effective, and stuns the enemy for quite some time.

After throwing it in a room, it can blind the enemies for a while, and you can swiftly get rid of all of them without them ever knowing who shot at them.

Dead Silence can be beneficial when you are using an aggressive build, being out in the open, you can mask your footsteps while approaching an enemy. Dead Silence makes them vulnerable and out in the open ready for you to attack.

To fully maximize this Kastov-74U Loadout potential, we will explain some tips and tricks that will make or break your game, as they give you the edge you need over your opponents. This playstyle will be easy to get the hang of and hard to master, as it involves quick reflexes and a high presence of mind.

With the Kastov-545 and this loadout, you need to be as aggressive as possible and be open to pushing that room where no teammate is stepping in. Check your corners properly, and take out any unprepared enemy. You will eventually start to love this playstyle after racking up kills.

Being out in the open will allow you to rack up the kills of opponents hiding out in the outskirts, as they are usually unprepared and looking to advance to the objective or the hot zone. Finding and killing them in their way nets you free kills.

Using Dead Silence is the most crucial tip of this build, as it can help you get across campers and quickly push on them without them ever knowing. Dead Silence becomes the ultimate combo when paired with Ghost, as your presence will be invisible.

Switching to your secondary weapon is faster and better than reloading. it can be beneficial if someone pushes you and you are in the corner. Switching to your shotgun will change the battlefield and make it in your favor.

And that was our Modern Warfare 2 best Kastov-74U loadout and class setup.

The Kastov is an excellent weapon for short to medium range, with a reasonable firing rate. Not to mention having a shotgun as a secondary that helps you kill people pushing on you when you reload.

This guide helped you find the ideal loadout for the Kastov-74U. If you know a better loadout or are using one currently, please let us know in the comments below! We would love to hear your feedback.