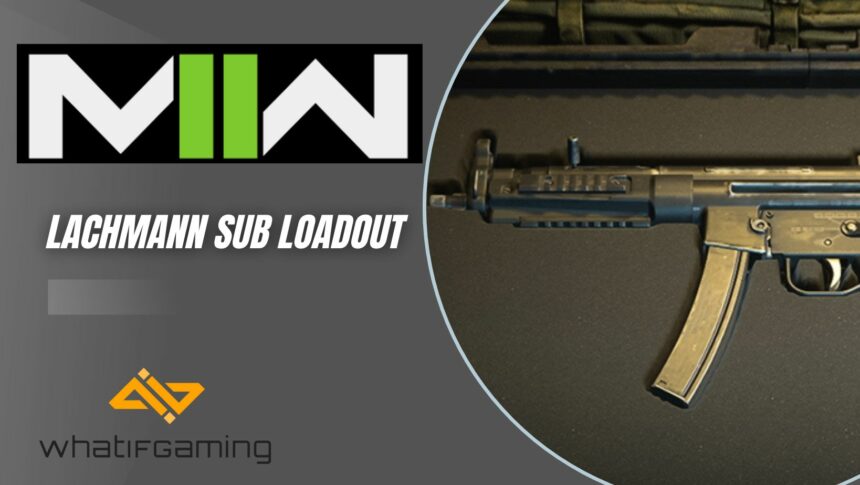 The Lachmann Sub is one of the best SMGs in Modern Warfare 2, just like the FSS Hurricane. It takes a long time to unlock, but once you get it, you will absolutely love the weapon. This gun has a rapid-fire rate, tons of recoil, and insane damage. That is why we have made this Modern Warfare 2 best Lachmann Sub loadout guide just for you!

Unlike the Raal MG, this weapon is light in weight and offers a lot of mobility to the player. Plus, you will also have to move around the map and play as aggressively as you can, like with the FTAC Recon or the M4. With that said, let’s dive right in and check out this Modern Warfare 2 best Lachmann Sub loadout.

How to Unlock Lachmann Sub

Unlocking the Lachmann Sub can take a lot of time and effort. However, if you are having fun playing multiplayer, you will get to this weapon in no time. To unlock it, you must first reach Rank 18 on your account.

Before we talk about anything else, let’s look at the Lachmann Subs’ stats. It is an amazing weapon with high damage and a lot of fire rate. It works optimally at medium range and has somewhat precise accuracy. The best part is that this weapon offers you a lot of mobility due to its lightweight.

Having the ideal gun setup can help you increase the stats of your weapon. While the Lachmann Sub is great and can fire quickly, having the loadout mentioned below will allow you to have better recoil control as well.

With this setup, your play style will be aggressive, with a lot of running around the map. Try to fight enemies at close range since that is where your weapon is the most effective.

Note: All image credits in this section go to Skirata Gaming.

The FTAC M-Sub 12″ barrel offers you additional recoil control, bullet velocity, and more damage range. Plus, it also gives you more hip-fire accuracy which is a great thing to have when using an SMG. The downsides are that you will have reduced ADS speed and less movement speed as well.

While using this SMG, you will notice that your recoil control is terrible due to the swift fire rate. To avoid that, this muzzle will give you more recoil control horizontally and vertically. However, your aiming stability will fall off a bit but that shouldn’t matter since you do not have to fight long-distance battles.

Controlling the Lachmann Sub can be a troublesome task since it has a lot of recoil. However, this underbarrel offers you tons of gun-kick control and hip-fire accuracy as well. On top of that, you will also get better steadiness in your aim, which is much-needed in this loadout.

While this might be a controversial pick, I feel like having no stock is the best with the Lachmann Sub. Having no stock offer you more movement speed and better ADS speed as well. Since you will be running around guns blazing, having more mobility is a great thing.

When it comes to rear grips, the LM Cronus Grip is a solid choice. It offers more flinch resistance which will help you keep your aim steady. Flinch is a mechanic in Call of Duty that shakes your camera depending on what you get hit by. So, having more resistance will cause your camera to shake less.

Now, let’s take a look at the class setup for the Lachmann Sub. Running this setup will allow you to run around the map swiftly. You’ll also have a faster reload speed thanks to your bonus perk. Speaking of the bonus perk, you can swap that out depending on the type of match you are in.

When it comes to secondary weapons, the X12 is a great pistol that has a good fire rate and decent damage. When it comes to starting pistols, there isn’t a better alternative to the X12. You won’t need to take out this weapon since your Lachmann Sub is a great choice for close-range combat.

As the name suggests, Double Time allows you to quickly sprint around the map without any worries. Since the game has a lot of fast-paced combat, having the ability to sprint swiftly is a great way to fight enemies all over the map. Plus, you will also be able to run away from sticky situations and get to safety.

Battle Hardened reduces the effects of all Flash, Stun, EMP, Gas Grenades, and Shock Sticks. This can help you quickly recover and turn the tides in your favor instead of being blinded and dying to the enemy. This will help you get back into action quickly and take out the enemy that used their tactical grenades on you.

Fast Hands gives you a lot of momentum as you can swiftly change and reload your weapons. You will want to spend every second fighting the enemy without a lot of downtime in this LMG loadout. Plus, since you will be carrying two primary weapons, Fast Hands will allow you to quickly swap between them.

Since you will be running around the map playing aggressively, you will be easily detected by the enemy. However, if you pick Ghost they will not be able to find you that easily. It allows you to become undetectable via UAVs, Portable Radars, and Heartbeat Sensors.

Carrying the Frag Grenade as your lethal with this loadout is a great idea. If you see an enemy hiding behind cover or camping, you can throw your grenade to flush them out. When they are running out of their position, you can spray your Lachmann Sub and get a free kill.

Dead Silence is a great Field Upgrade to have since it reduces the noise you make while walking or sprinting. This will help you remain hidden and get the jump on your target. This upgrade is ideal when you are picking Ghost as your Ultimate Perk.

Finally, let’s talk a bit about the tips and tricks to help you maximize the potential of this weapon. To make sure that you are performing well with this gun, you must do a few things first. If you are a newer player, getting used to this type of play style might take a while. However, with enough practice, you’ll be good to go.

Run Around the Map

With the Lachmann Sub and this loadout, you need to play as aggressively as possible. This doesn’t mean that you should jump in without thinking. You might not be used to this play style, but after a few games, you will love how many kills you get in each round. Plus, getting those kill streaks is extremely easy.

Keep Track of Your Bullets

While using the Lachmann Sub, you will run out of bullets really quickly. Since you are not carrying the Munitions Box or any other ammo source, you will have to keep an eye on your bullets. When you are running low, try to find more bullets so that you do not end up in an awkward situation.

Hopefully, this guide helped you find the ideal loadout for the Lachmann Sub. If you have a better loadout that you are using, let us know in the comments below! We would also love to hear your thoughts on this loadout as well.