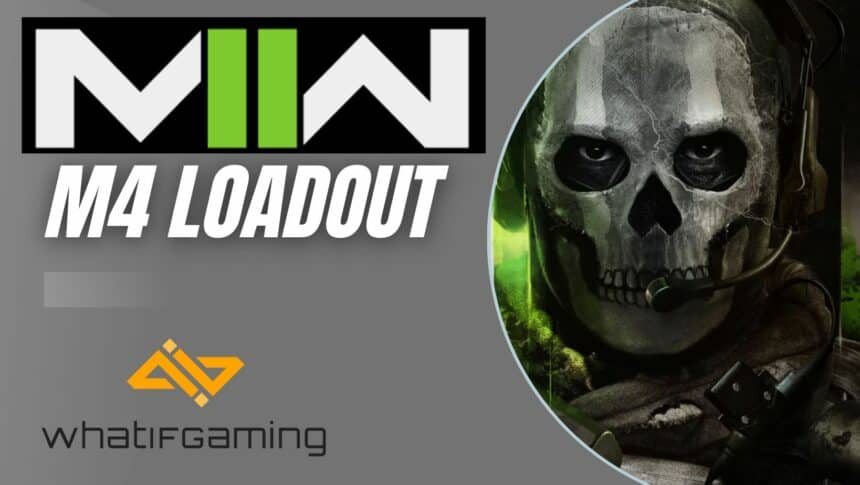 The M4 is a great assault rifle that is not only good for beginners but is also one of the best weapons in Modern Warfare 2. If you have been playing Call of Duty for some time now, you will know that the M4 is a great weapon that can be used to win a lot of multiplayer matches.

However, before you hop into a match, you will want to know the best loadout for it. That is why we have mentioned the Modern Warfare 2 best M4 loadout, class setup, and attachments just for you. With that said, let’s dive right in and get started.

How to Unlock M4

The best part about the M4 is that it is already unlocked when you start playing the game. If you level up your M4, you will start unlocking various rifles in its tree – like the FTAC Recon. So, you shouldn’t worry about how to unlock this weapon.

As soon as you launch the game, go to the multiplayer mode and enter the Gunsmith tab. Over there, you will see the M4 assault rifle, the VEL 46 SMG, and the MCPR-300 sniper rifle, just to name a few weapons.

After you have fully leveled your M4 and have all the attachments, your stats will have a lot of damage, fire rate, accuracy, and recoil control. The gun also handles pretty well and has a decent range. You can use the M4 for medium/long-range fights without any issues. Now that we have talked about the stats, let’s get started with the Modern Warfare 2 Best M4 Loadout.

If you have the correct gun setup, your stats will increase significantly. It also allows you to focus on a few aspects to improve them. If you want to have precise accuracy, you can put various attachments that will help you increase that stat.

With this setup, you should focus on engaging in medium/long-distance fights. For that, you need to have a good aim and know where the enemy is. You will also want to play aggressively and run around the map thanks to various perks and attachments that give you movement speed.

Note: All image credits in this section go to KunjTV

This is the standard barrel for the M16 rifle. If you attach it to the M4, you will have increased accuracy and better bullet velocity. On top of that, this barrel also gives you better recoil control which is always a welcomed addition. Finally, it also provides more precise hip fire accuracy as well.

However, your ADS will be slower, and it also has a slight toll on your movement speed since it is a heavy barrel.

The Tempus P80 Strike Stock gives your weapon a better ADS speed and it also allows you to sprint faster as well. Alongside increasing your sprint speed, it also increases your crouched movement speed as well. Finally, if you are aiming, your walking speed is faster as well which is a much-needed effect.

When it comes to the rear grip, the XTEN Grip is a great choice for the M4. Equipping this on your M4 will allow you to have enhanced ADS speed and better sprint-to-fire speed. This means that you can transition into aiming right after sprinting quickly instead of going through a somewhat lengthy animation.

The only downside to this grip is that you have reduced recoil control. However, the other attachments cover up for this so it shouldn’t make a difference.

To further improve your aim and provide stability, you should attach the FSS Sharkfin 90 as the under barrel. While there are a few other options as well that will help you out; this attachment is quite handy. The best part about this is that there are no cons.

So, if you are new to the game, this underbarrel will be available from the start. As you progress, you can unlock other variants and choose them for better results.

Finally, the Echoline GS-X is a great muzzle for the M4. It not only reduces the recoil but also helps you suppress the sound as well. You will not be spotted on the map while firing this weapon. So, you can move around the map and act like John Wick without getting detected at all.

After successfully setting up all the attachments, you will want to set up your perks and other things as well. We will show you an ideal setup that will help you perform really well while using the M4. All of the mentioned perks complement the M4 and will keep you in the fight longer. =

While you can choose the Overkill perk to choose another primary weapon in your second slot, it isn’t worth wasting a perk slot for that. The M4 is good at close ranges as well, so you shouldn’t have a problem.

Battle Hardened allows you to reduce the effect of enemy Flash, Stun, EMP, Gas Grenades, and Shock Sticks. This is a great way to reduce the enemy’s utility as their tactical grenades won’t have a lot of effect on you. Being blinded for a shorter duration against Flashes can help you react faster as well.

Double Time allows you to quickly sprint around the map without any worries. Since the game has a lot of fast-paced combat, having the ability to sprint swiftly is a great way to fight enemies all over the map. Double Time also lets you quickly reposition yourself in case you find yourself against multiple enemies.

Cold-Blooded allows you to avoid killstreak rewards such as vision from Chopper Gunners, AC-130s, and Predator Missiles. While you will be visible to them, you won’t be outlined or shown on the map as a red dot. This lets you play the game in a stealthy way without giving away your location.

Ghost is arguably the strongest Ultimate Perk in Modern Warfare 2 right now. It allows you to become undetectable via UAVs, Portable Radars, and Heartbeat Sensors. This is a great way to remain hidden from the enemies and surprise them. If you master the stealth element, you will easily build up your kill streaks.

There isn’t much I can say about Semtex other than it deals a lot of damage if used correctly. Throw it in a room or any enclosed area if you suspect that enemies are waiting for you there. This should force them to run out into the open or die to it. Plus, you can also use it in open fields and get decent results.

Flash grenades are extremely underrated in Modern Warfare 2. Since they do not do any direct damage, most players avoid choosing them. However, they allow you to blind other players if they are in its radius. So, always make sure that you throw a flash grenade in a room where you suspect that danger might be lurking around the corner.

Plus, throwing this grenade at multiple enemies will allow you to get the upper hand while all of them are blinded.

The Munitions Box is one of my favorite Field Upgrades in Modern Warfare 2. While you can choose Dead Silence, I like having the option to have spare ammo instead. The Munitions Box allows you to place it on the field and refill your ammo. This is a great tool to have in your arsenal, as you can easily run out of ammo if you are spraying and praying.

Once you are at your final two magazines, make sure to put the Munitions Box down and refill your weapon. It can be quite jarring if you run out of ammo during a fight and have to pick up a random gun off the ground.

That was everything you need to know about the Modern Warfare 2 Best M4 Loadout. Now, let’s talk about some tips and tricks that will help you further.

If you are an M4 user, you will be really happy with this loadout since it allows you to have good weapon stats and high damage. Plus, your perks will let you run around the map swiftly, while your grenades will allow you to have utility in your kit.

This tip can be applied to any weapon in Modern Warfare 2, but it especially applies to the M4. Since it is an assault rifle, having precise aim will allow you to build up your KDA and kill streaks much more easily. To improve your aim, you should play the game and get used to all the controls and maps. If you know the map, you will have a better time and feel more confident.

Use the Munitions Box Wisely

The Munition Box is a great Field Upgrade since it offers a lot of benefits. When using the M4, you will run out of ammo before even realizing it. So, having more ammo means that you will not find yourself in an awkward situation where you run out of bullets while fighting an enemy.

And there you have it, that is the Modern Warfare 2 best M4 loadout and class setup. This is a great assault rifle that works best at medium/long ranges. Having this loadout will help you perform better and win more games.

Hopefully, this guide helped you find the ideal loadout for the M4. If you have a better loadout that you are using, let us know in the comments below! We would also love to hear your thoughts on this loadout as well.