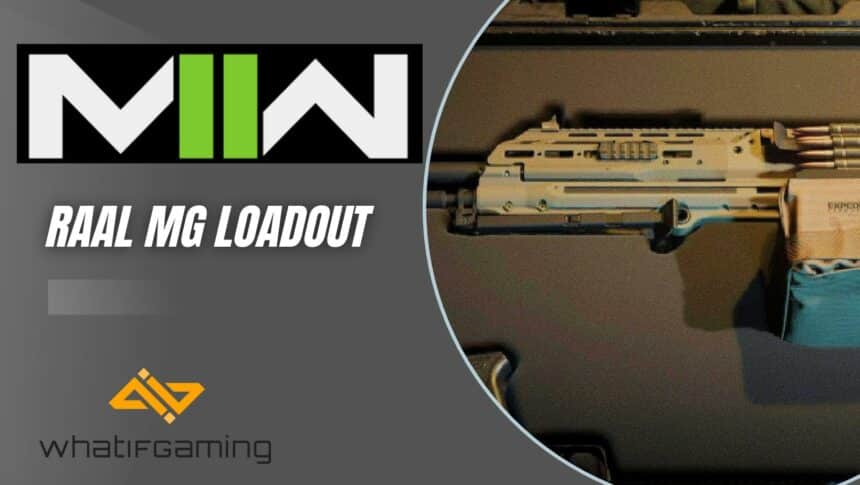 Using an LMG is quite fun since you have an abundance of ammo and can pin down enemies behind the cover. Unlike the FTAC Recon or the M4, this weapon has a lot of recoil which makes it difficult to control. That is why this Modern Warfare 2 best Raal MG loadout will allow you to make the most of this weapon.

The Raal MG has a slow ADS, tons of recoil, and not a lot of aiming stability. This loadout will let you customize your weapon in a way in which you increase all those stats and make this gun extremely viable. With that said, let’s dive right in and check out the Modern Warfare 2 best Raal MG loadout.

How to Unlock Raal MG

Unlike the MCPR-300, the Raal MG isn’t automatically unlocked in Modern Warfare 2. There are two ways in which you can unlock this LMG. Firstly, you can buy the in-game blueprint from the shop, which costs you money. Secondly, you unlock it by reaching Rank 25 in multiplayer modes.

Make use of the Double XP tokens whenever you get them, and get to higher ranks quickly. This might sound like a lot of XP, but you won’t even notice that you reached Rank 25.

After you have fully leveled your Raal MG and have all the attachments, your stats will have a lot of damage, recoil control, and aiming stability. The range of this weapon is also surprisingly longer than you might expect. However, the ideal distance to fight is medium or short range.

You can easily use the Raal MG to help your team pin down enemies that are hiding behind the cover. This will force them to make a desperate attempt and reposition themselves. Now that we have talked about how to unlock this weapon and what its stats are, let’s check out the Modern Warfare 2 best Raal MG loadout.

If you have the correct gun setup, your stats will increase significantly. It also allows you to focus on a few aspects to improve them. If you want to have precise accuracy and less recoil, you can put various attachments that will help you increase that stat.

With this setup, you should focus on engaging in medium-distance fights. For that, you need to have good aim stability and know how to fire in short bursts. You will also want to play aggressively and push the enemy back, thanks to your LMG attachments that give you more recoil control.

You might have noticed that we put 4 attachments instead of 5. This is because any other attachments than the ones mentioned below will hurt the gun rather than improve it further. So, if you don’t want slower movement speeds or other downsides, try out these 4 attachments.

Note: All image credits in this section go to Klay.

Since LMGs have slow ADS speeds, the FSS OLE-V Laser will drastically increase your ADS speed alongside aiming stability. This will allow you to focus easily on enemies without being slow or losing control. Plus, it also increases your sprint-to-fire speed as well which is a welcomed addition.

LMGs can be quite heavy, which can make your character slow. However, this FSS Riot Stock gives you more sprinting speed and better ADS speed as well. Plus, it also offers more movement speed if you are crouched, which is always a welcomed addition.

Having more ADS and sprint-to-fire speed is crucial when using an LMG. Since you will want to run around the map to attack enemies, this rear grip gives you better sprint-to-fire speed and a lot of ADS speed as well. The only downside is that it offers less recoil control which can be a bit of a bad thing.

After having the ideal attachments, you will want to have good perks as well. Having the right perks can make or break a loadout. So, let’s take a look at the best perks and other things that you can equip to improve this loadout and perform better.

With the perks mentioned below, you will be able to carry another primary weapon, have a quicker reload speed, and will be difficult to detect.

If you are a fan of SMGs, you will absolutely love the FSS Hurricane. It has a lot of damage and a swift fire rate as well. You will want to swap to this weapon if the enemies get too close for comfort. While your Raal MG is a good choice, it doesn’t work that well if the enemy is almost in melee range.

Battle Hardened reduces the effects of all Flash, Stun, EMP, Gas Grenades, and Shock Sticks. This can help you quickly recover and turn the tides in your favor instead of being blinded and dying to the enemy.

You will notice that we suggest Overkill for most loadouts. This is because it is one of the best perks that you can take right now. Overkill allows you to carry another primary weapon in your secondary slot. While you won’t always need it, having a second primary weapon is always a good thing.

The Raal MG is a great gun with tons of damage at close/medium range. However, there can be issues if you want to fight enemies that get too close to you. For that, you need to carry an SMG or an AR like the FSS Hurricane, M4, or FTAC Recon.

Fast Hands gives you a lot of momentum as you can swiftly change and reload your weapons. You will want to spend every second fighting the enemy without a lot of downtime in this LMG loadout. Plus, since you will be carrying two primary weapons, Fast Hands will allow you to quickly swap between them.

Ghost is arguably the strongest Ultimate Perk in Modern Warfare 2 right now. It allows you to become undetectable via UAVs, Portable Radars, and Heartbeat Sensors. This is a great way to remain hidden from the enemies and surprise them. If you master the stealth element, you will easily build up your kill streaks.

While I prefer picking Frag Grenades, Claymore will help you avoid enemies that like to flank you. While you will be running around the map, try to hold down smaller locations that do not have a lot of open spaces. This way, the enemies will be forced to run through a tight area to get to you.

A well-placed Claymore will kill an unsuspecting enemy and let you know where they are flanking you from.

Dead Silence is a great Field Upgrade to have since it reduces the noise you make while walking or sprinting. This will help you remain hidden and get the jump on your target. This upgrade is ideal when you are picking Ghost as your Ultimate Perk.

The Raal MG is a fun weapon that deals a lot of damage. With the right loadout, you will notice that this weapon is even better! After you have applied the Modern Warfare 2 best Raal MG loadout mentioned above, take a look at some of the best tips and tricks you can follow to perform better.

This is one of the most crucial tips that I can give. Always use your ADS while using this LMG since it will increase your aiming stability and reduce the recoil by a lot. Otherwise, you will be running around with the gun in the air due to the high amount of recoil. Plus, ADS gives you more precision as well.

This tip is an extension of the previous one. Use ADS to control your recoil and make sure that you track the enemy rather than just firing in their general direction. Since Modern Warfare 2 has fast-paced gameplay, you will want to move your camera and track the enemy to fire at them.

LMGs have a lot of ammo in their magazines. However, it can take a long time to reload them. So, make sure that you do not reload your weapon instinctively if you have more than 30 bullets left. Try to find a spot where there are no enemies nearby and then reload it.

And there you have it, that is the Modern Warfare 2 best Raal MG loadout and class setup. Usually, this LMG has a lot of recoil which makes it difficult to use. However, with this loadout, you will have a great time and have minimal recoil, allowing you to get more kills.

Hopefully, this guide helped you find the ideal loadout for the Raal MG. If you have a better loadout that you are using, let us know in the comments below! We would also love to hear your thoughts on this loadout as well.