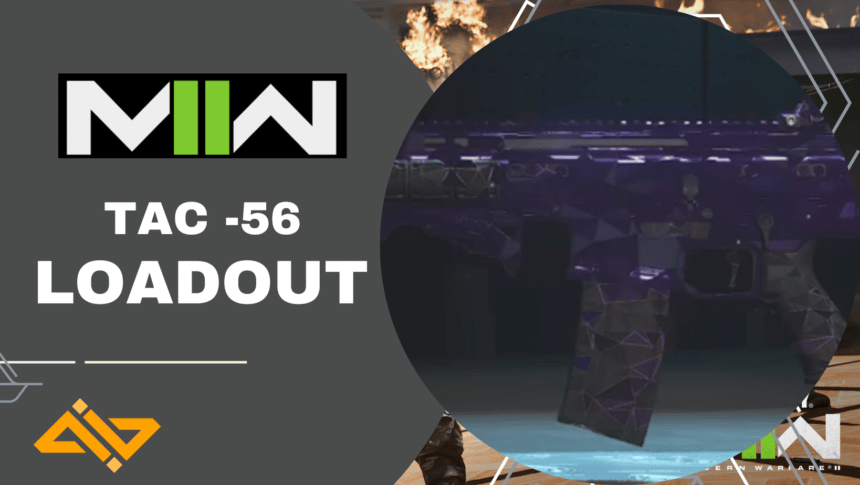 Modern Warfare 2 was recently released, and its player base is growing daily. People are looking for ways to increase their odds of winning, and for that, we have created this guide that will explain the best Modern Warfare 2 TAQ-56 Loadout, Class Setup, and Attachments.

The TAQ-56 Is a lovely Assault rifle and features a reasonable firing rate and overall high damage. Although its damage is slightly lower than the Kastov-762, it excels in recoil control.

How to Unlock the TAQ-56

Unlocking the TAQ-56 is simple. All you have to do is reach rank level 19, and the receiver for the TAQ-56 will be available in your inventory, which makes this weapon easy to get your hands on as a beginner.

Everyone can have a loadout, but what matters the most is how you intend to use it because having a playstyle that does not support your loadout will get you killed. With the gun setup we will be creating, racking up kills won’t be an issue, as we will use the attachments that go well with the TAQ-56.

The TAQ-56 is an Assault rifle that you should use with caution because it features relatively low range, accuracy, and overall high damage. To fix that, we will use attachments that offset these potential drawbacks.

To reach the maximum capacity of the TAQ-56 Loadout, you will have to level up your TAQ-56 to level 20, after which you will unlock all the attachments, ready to use.

Lunchtime suggests this Loadouton Youtube, and All the credit is due to him for the Images.

The 14.5″ Tundra Pro Barrel is an extended and dead-accurate barrel featuring a 17.5″ mil-spec barrel that keeps shots extremely precise.

And it slightly decreases the ADS Speed and Hip Fire Recoil.

The FTAC Ripper under the barrel has extra textures embedded in it, allowing for snappier recoil control and overall highly accurate shots.

Keep in mind that this attachment also increases the time it takes to reach ADS fully and slightly reduces your walking speed.

The Komodo Heavy is a compact muzzle device that helps mitigate recoil for a more controllable and accurate weapon.

The TV Xline Pro is a tactical stock engineered for superior aim down the sight speed and movement.

It increases your crouch movement speed, sprint speed, and aim down the sight speeds. It is the best stock for this TAQ-56 loadout.

The Cleanshot is a reliable and minimalist grip designed for speed, increasing your sprint-to-fire speed and ADS Speed.

Let’s get into the Class Setup, which is crucial for your overall match-winning skills. Having an adequately modified gun is half the battle. Taking the right perks and secondary weapons is equally as important. With this class setup, you will be carrying two primary weapons instead of a pistol as your secondary.

We will be using the Expedite 12 as your secondary weapon because it is the best shotgun currently available in the game. It can easily knock down any enemy at close range, making a sweet surprise for those opponents who constantly push you whenever you get stuck in a corner.

Overkill is the cherry apple of this loadout, as it allows you to dual-wield weapons. Being able to carry two weapons can go a long way, as it can help you gain an edge whenever you feel outnumbered, as you can always switch to your shotgun whenever you run out of bullets on your primary weapon.

The Double Time perk allows you to run faster and for longer. It doubles the duration of your tactical sprint and increases the crouch movement speed by nearly 30%. This boost in movement can be helpful whenever you run from A to B.

Fast Hands is one of my favorites, as it can allow you to reload and switch weapons faster. The use of equipment such as grenades is also boosted. This perk can help you increase your odds of winning because the less time you spend reloading, the more chances you have of killing an opponent.

Ghost is currently the best ultimate perk available, as it can mask your presence from the map, sensors, UAV, etc. you will quite literally become a ghost. This will help you sneak up on enemies that are unprepared to engage, and you can even stack up some killstreaks this way because you can kill enemies and hide in a corner, and nobody will know your location.

The thermite is a good lethal if appropriately aimed, as it can stick to any surface. The thermite can become an excellent barrier whenever someone is trying to push you, as you can shoot this at a doorway, and it will be stuck to the door preventing anyone from crossing it.

Because whenever someone comes close to the thermite, it starts damaging the opponent’s health, much like a Molotov, it is also helpful to clear a room where you know someone is bound to be camping as its radius is quite huge.

The Smoke Grenade can come in handy whenever you feel that you are getting outnumbered, as you can always drop it somewhere and try to make a run for it, or if someone tries to push the smoke, you can easily pick up some kills.

The smoke grenade can disorient some players as it prevents all sorts of vision unless someone uses Thermal imaging. Then that’s a different story altogether.

To maximize the chances of winning with this TAQ-56 loadout. Make sure to follow our guidelines and overall playstyle, and you will never run into a problem. Pro players often use these tips and tricks regularly, but they rarely share. So make sure to read them all and try to implement them in your regular games.

With the TAQ-56 and this loadout, you should be slightly defensive. Pushing without a purpose will only get you killed. Because the enemies will be waiting for you to aimlessly barge into the room, waiting to be killed. Try to be on the defensive side and adequately check your corners before engaging an enemy. This tip alone will increase your chances of winning the duel by nearly 50%.

This further increases my stance on being defensive, as being out in the open means you are vulnerable from all sides of the map. Being hidden and aware of your surroundings will give you a greater chance of success.

Actively using your field upgrade can allow you to sneak past enemies undetected, as it can mask your footsteps. It can help you escape tricky situations or possibly lurk up to enemies and kill them, allowing you to rack up killstreaks quickly.

Using your secondary shotgun is always better than reloading your primary whenever needed. As reloading takes time and you are vulnerable to enemy fire, switching to the secondary will allow you to be on your toes so if an enemy pushes you, you can immediately shoot back.

And this was our TAQ-56 Loadout guide. This is a good beginner AR, and it deals a fair bit of damage while having relatively low recoil. and not to mention, it can kill any enemy quickly in three or four bullets.

This TAQ-56 loadout guide will help you excel in the game. If you have a loadout that you know and want us to know, please let us know in the comments below. We would love to hear your feedback.