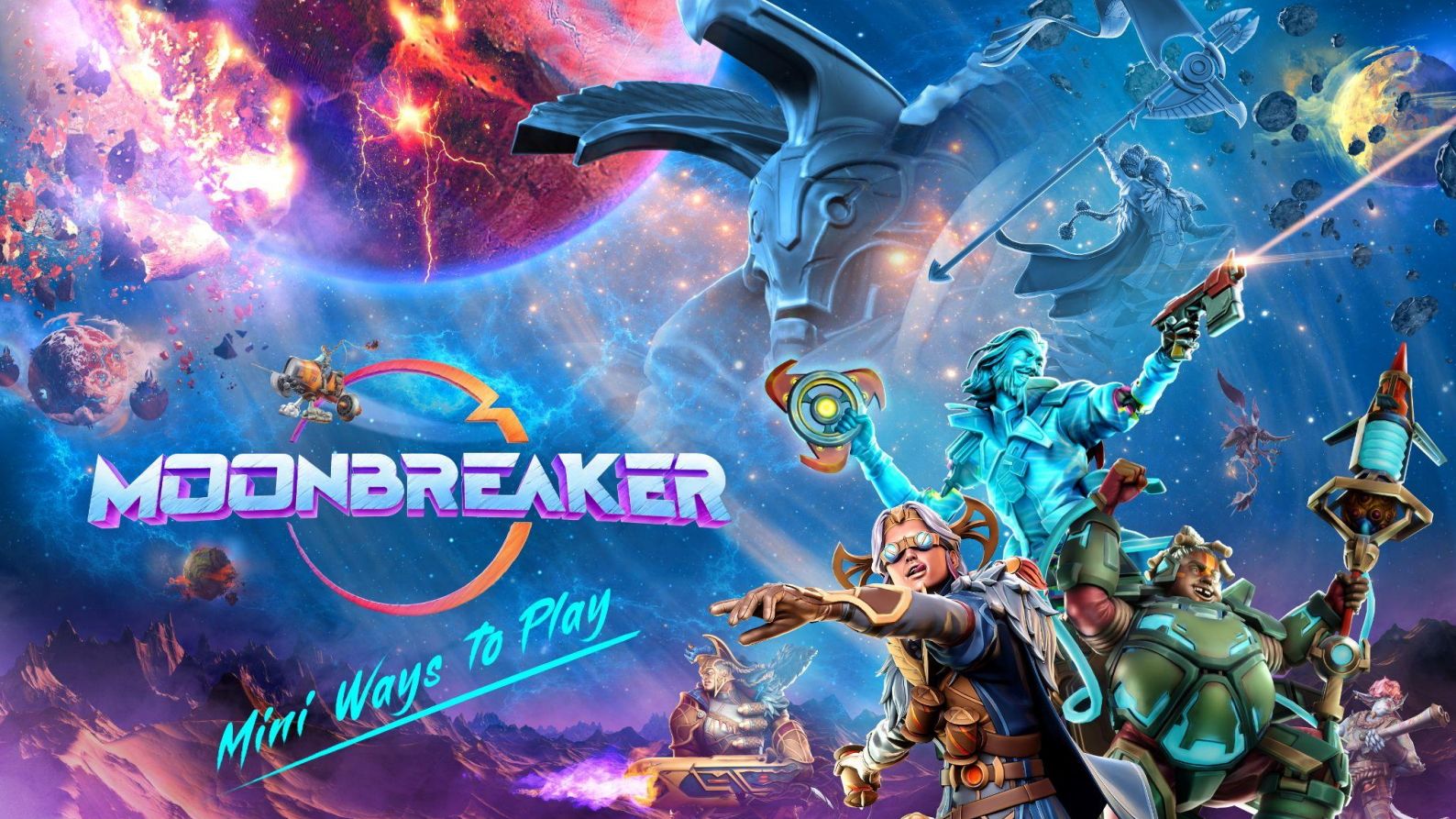 Moonbreaker is an early access turn-based strategy game from Unknown Worlds Entertainment, published by Krafton Inc. It aims to bring tabletop gaming into the digital world.

There are countless tabletop games right now, and the genre is growing in popularity. It is one of the reasons why the Subnautica developers pushed through with Moonbreaker.

But with the countless turn-based strategy games available, can Moonbreaker make its way to the top? Well, here are our impressions. Spoiler alert, though, this game will get you hooked. Let’s get started.

Moonbreaker’s graphics is its strongest suit. The characters are detailed, and there is enough distinction between the cultures – the game’s term for its factions.

It seems that the developers drew inspiration from Aztec and Roman mythology for some of their characters, especially when it comes to visual design.

You will immediately notice it from the patterns and overall look of the units. For instance, the captain, Extilior, reminded me of Mars, the Roman God of War. He wields a large sword and features a shield with a red glow.

The arenas are a visual spectacle. They are well-designed, and it is far from the modern ancient look of the characters. This time, they are more futuristic and industrial, which is a fun contrast. There is also an arena set in snowy lands, which breaks the usual boxy modern look offering more variety to players.

The game’s audio is not as strong as the game’s visuals. Sure, it amps up the overall immersive experience – it does a great job. However, it feels too generic. Somehow, it felt like I have already heard of it before.

For example, the Halo theme is already a classic. Once you hear it, you already know that “hey, it’s Halo.” The same goes for Dota 2 and many other titles. Even Subnautica’s score has a distinct quality that helps with its identity.

Do not get me wrong, though, Moonbreaker’s audio gets the job done, and I think that is what matters, but I’m yet to hear a track that really defines the game.

Here comes the really fun part. Moonbreaker is on the right track when it comes to gameplay.

The game has a simple goal – destroy the captain of the enemy’s team. However, doing so is not easy as different units are present to attack you and defend the captain.

Moonbreaker sounds simple at first, but the game is designed to give you a little challenge.

You need to manage your Cinder or Mana. I had a hard time figuring this out initially and assumed I could do every mode I wanted. Once I understood how to manage my resources, the game gets a little bit easier. The in-game tutorials that are essentially clips with narration give a pretty good idea of beginner and advanced mechanics.

RNG plays a lot in the game too. The game also features the Bridge, where you can choose which unit to deploy.

Once you are out of units on the Bridge, you will have to Reinforce your Bridge. Reinforcing is random, though. You cannot choose which units to place on the Bridge. Simply put, this part is where you draw your cards from your deck and into your hand (Bridge). Deploying a character to the arena has a timer, and you cannot attack immediately.

Different characters have various skill sets or buffs. The health bar also varies from character to character, with the captains having more.

Depending on the character’s skills, you can move or attack twice in one round. Though in general, you can only do so one at a time.

Moreover, the arena affects how you play the game too. There are cover points scattered throughout the area, and it affects your attacks. Some covers will reduce your accuracy, while others will totally block your line of sight, and you cannot attack.

The start of the game randomly pairs two abilities called “ship assists.” You will then choose which set to have in the game.

Some skills include Plink (damage 1 HP to your enemy) and Statis Field (Stun a unit for one turn). Various combinations are available, and you need to strategize beforehand since the assists are potent tools to win the game.

Lastly, I played both the PvP and AI options. The gameplay works the same, but the AIs need more buff since it is easy to defeat them.

The best way to play the game is through PvP. Challenge yourself and fight against other Moonbreaker players.

Moonbreaker has no fixed strategy that will work at all times. You will adjust accordingly depending on the situation. The game has a lot of RNG involved.

In some card games, you need to have synergy between your characters. That is not always the case in Moonbreaker.

The characters in this game can stand alone by themselves, either through their skills or buffs. However, having multiple units synergizing with each other will double their firepower. In return, you will have an easier time dealing with your opponents.

Since Moonbreaker is a digital version of the paint-and-play hobby, there is a paint section where you can customize your units.

The developers did a great job with this feature. There are a lot of tools that will replicate the actual painting process.

You may choose Paint, Wash, Dry Brush, Air Brush, Stipple, and Decal. Selecting a color palette is not hard since the default ones already look good.

As someone with experience building and painting Gundam models, the developers impressed me with how the developers made this feature. The effect of mixing and matching the different brushes simulates the look that I want. I can even blend the colors by layering them!

This feature is excellent, and I’m a bit surprised no one thought of putting in such a robust system in their game before.

If you’re unfamiliar, Moonbreaker’s world, writing, and character work are actually handled by Brandon Sanderson, one of the best fantasy authors with tons of series under their belt. In turn, the characters are fleshed out, have sharp dialogue, and feel part of the world.

You experience some of their dialogue through gameplay, but the actual story is narrated in the form of audio episodes. Currently, you can hear Extilior’s story, and it’s a good one with solid voice acting and enough audio effects to create an immersive world.

It’s an approach that works well for such a gameplay-heavy title, and I’m very excited to hear more!

Update: As of 27th October 2022, the developers have completely removed the monetization system in place for the duration of the Early Access period. All Pulsar purchases will be automatically refunded via Steam.

I love the game’s visuals, audio, and gameplay. However, there is one thing that is bothering me – monetization.

There are loot boxes available in the game. These loot boxes contain the characters, and there is a high chance that you will receive duplicates. In the end, if you want to unlock more characters, you need to spend a lot more money.

Another disappointment is the unit rarities. There are different levels of rarity in the game.

Unlocking loot boxes will give you a unit with varying rarity. The merits can unlock a character immediately without going through loot boxes again. If you have the same unit, you will receive Merits instead.

However, this system has a flaw.

What does rarity do? Unfortunately, it is only a minor cosmetic change. This system is lackluster since there is already a paint customization option. I would instead customize my character there than unlock little cosmetic changes.

In the end, the system rewards players with a lot of money. All they have to do is to buy more packs and unlock powerful characters that way.

Meanwhile, budget players are at the mercy of the free currency that the game gives. It is not generous, so it will take a while to unlock the rest of the characters.

In the end, I think it is one way for the developers to earn profit. However, I wish that they would have a different system in place that would reward frugal gamers.

The answer is a resounding yes! Moonbreaker did a great job with its gameplay. The visuals and audio are inspiring, making it a worthy buy.

For only $30, you get an excellent tabletop strategy game. It is in early access, but it is already enough to keep you on your seat for long hours of playtime.

This impressions article is based on the PC version of Moonbreaker. The key was provided by KRAFTON.