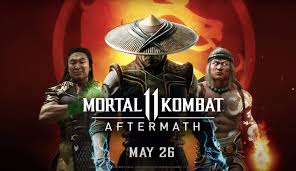 Mortal Kombat 11 Aftermath is the story DLC that is being released for the game in a couple of days. It seems that the Mortal Kombat 11 Roster will grow even further with the release of Mortal Kombat Aftermath. The story continues from where the main game’s campaign ended and brings 3 new fighters to the mix that aren’t part of the Kombat Pack 2. It seems Ed Boon may have confirmed that there are 2 other hidden surprised in the DLC.

In an interview with Geoff Keighley, which can be viewed below, Ed Boon says that the team has added Friendships for all 36 characters in the game. Jump to 37:15 and you will hear it.

You can view the interview by clicking here.

On the official site of Mortal Kombat 11, it currently lists 34 fighters. Including the Aftermath exclusive characters: Sheeva, Robocop, and Fujin.

Fans are speculating the reason that Ed Boon let out 36 is that completing Aftermath could unlock Quan Chi and Shinnok. Whether or not the regular players will be able to unlock the 2 fighters without Aftermath is still a question, whoeevr they might be.

It’s also speculated that Kronika and another unplayable character got friendships added, as in Mortal Kombat 9, bosses were able to perform babalities on the player.

According to the last datamine conducted, the final total of players in the roster comes down to 42. With the release of Aftermath, we will be at 36, this means that the Kombat Pack 2 will add 6 characters.

Ed Boon has confirmed that Mortal Kombat 11 has a longer support plan laid out, so whether there will be succeeding Kombat Packs released is something only time will tell. Perhaps the game will get integrated into the PlayStation 5 and Xbox Series X.

Mortal Kombat Aftermath releases in a couple of days for the Nintendo Switch, PlayStation 4, Xbox One and PC. Priced at $39.99, it adds additional story content and gives us 3 fighters. Part of the update will also be free additions to the game such as stage fatalities, and friendships.

What are your thoughts on Mortal Komba t11 Roster with the addition of Mortal Kombat Aftermath? Are you excited to try it out? Let us know what you think of all the above in the comments section below!