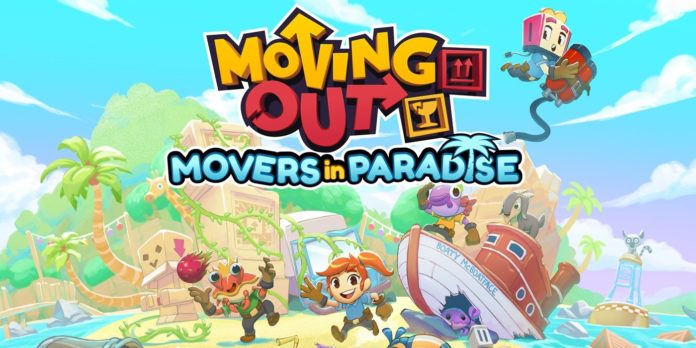 I’ve always loved Moving Out. Ever since I played the game with family back in May of last year (the first time lockdown got eased here), I’ve been a fan. It’s a game I enjoy in the same capacity as Overcooked – I enjoy it at the cost of my friendships. And now that lockdowns have been removed again, I am ready to lose a few more friends. So, this is not a Moving Out review, this is a Movers In Paradise DLC review.

Unlike Moving Out’s other DLC, The Employees of The Month pack, Movers in Paradise brings new content to the game. With a bunch of silly and neat bells and whistles attached, Movers in Paradise’s main attraction is the 24 new levels.

The DLC packs 24 tropical-themed levels with a whole bunch of new mechanics and props. The developers ran with the theme in adding 4 new adorable movers (or F.A.R.T for the more technically inclined).

In this Movers In Paradise DLC review, I will be attempting to take a look at the new content – and just the new content. The faults of the base game don’t count here, neither do its charms.

One good thing about Movers In Paradise is that you don’t really need to have finished the base game. Immediately, you can go on vacation on the Packmore Island for some “team-building activities”. In my experience, the starting levels of the DLC give you enough introduction to the game that you can just jump into it. However, the difficulty ramps up really fast so it’s good to have played a fair bit of the base game first.

As for the 24 new tropical levels you get to play on your “vacation”, they are an absolute blast. The great thing about these new maps is that they are not just more of the same. There are so many new props and mechanics introduced that the experience feels fresh enough.

While the base game starts out slow to make sure you really “grab” the concepts, the DLC doesn’t care. The starting levels of Movers In Paradise are a whole lot more interesting. And even in later levels, mechanics are recycled much less. Geysers that push you around, rafts that you can throw in the water to sail your way, and – my favorite – lemurs tossing things at your head are all part of the new tropical theme.

Moreover, the levels in Movers In Paradise are much more of headscratchers. My regular strategy of scanning the map and going for the largest items first just was not cutting it anymore. I found myself in more and more situations where the correct strategy wasn’t as obvious. And, that’s a great addition to the game.

All in all, every stage of Movers In Paradise felt a lot more unique. While the base game had me slapping ghosts for 4 consecutive levels, Movers In Paradise was quick to move on to new encounters. As a party game, the DLC successfully trapped me and my girlfriend longer in the silly giggly mood than the competitive “JUST PIVOT” one.

More Of The Same Fun

Yelling, slapping the hell out of each other, and failing throws was still the bulk of the time we spent in Movers In Paradise. The DLC comes to deliver you more of the same, and that’s perfectly fine. It never promised otherwise.

The pack was dependent on its foundation and the levels design of each map. And while not every single one of the 24 levels was perfect, most were good enough to cover up the forgettable maps. Of course, the DLC still suffered from the flaws of the base game but hey that’s not on Movers In Paradise.

If you’re looking for a brand new experience or Moving Out 2.0, keep looking. However, if you’ve enjoyed the game and want another round, then Movers In Paradise absolutely delivers.

Make sure to check the DLC on Steam or view it on your respective platform for a buttload of summer-time fun.

This review is based on the PC version of Moving Out – Movers in Paradise. The key was provided by Team17 Digital

Load more
Moving Out Movers In Paradise DLC ReviewMovers In Paradise is a whole lot of more-of-the-same fun that revitalizes the Moving Out formula without changing it too much. It's the perfect opportunity to revisit the game with your favorite party-game crew
Tech