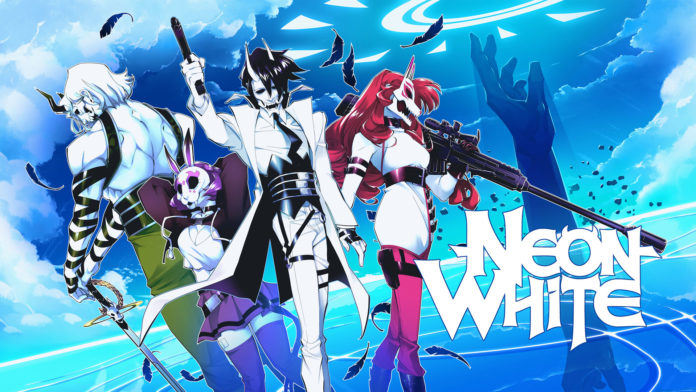 Neon White is a fast-paced FPS from Ben Esposito, Angel Matrix, and Annapurna Interactive. Ben Esposito previously released the hit indie title Donut County, but Neon White is absolutely nothing like that in any way. In my Neon White review, I’ll be talking about one of my favorite titles of the year, and why it should be on your radar.

According to the marketing, and the team behind it, Neon White is a game “for freaks by freaks”. This is pretty evident the moment you launch the title and watch the intro animation. It marries anime with a vaporware aesthetic and has a lot going on. You follow White, an amnesia-ridden assassin who has been plucked from Hell to deal with a demon infestation in Heaven. You, alongside other “Neons”, have to compete against each other for a chance to continue living in Heaven.

Most of the Neons you encounter are people from your past. You’ll interact with them in a visual novel style to learn more about them, and your past. There are a bunch of deliberate anime tropes in the writing, character designs, and even the main narrative. Even though I was rolling my eyes a bit at some of the earlier dialogue, a lot of characters grew on me over time, and even White became someone you rooted for.

A lot of it has to do with how snappy most of the dialogue is, and how some of the gameplay incentives push you to learn more. The strong voice acting breathes life into otherwise standard anime characters, and it helps that a vast majority of the dialogue was voice-acted.

While the main story itself isn’t exactly going to blow your mind, the varied cast of characters will stay with you for a while. I’m not that much of an anime fan, but a lot of the self-aware dialogue and references to anime tropes made the experience memorable. One of the characters even refers to you as their “Sasuke”, which was pretty funny.

Neon White isn’t a traditional shooter, but one where your “guns” are cards. Each card fires a certain type of ammo but also can be discarded for a certain platforming action. For example, the pistol card holds a few bullets, but it can be discarded to elevate you, which is essentially a jump. Knowing when to shoot, and when to discard is basically the core of this game. Over time, you’ll get different cards, each with a specific ability, like dash, stomp, or even grapple.

Each mission, is basically a string of 10 smaller levels, a lot of which can be completed in under a minute. While the levels aren’t hard, getting a better Medal like a Gold or Ace is where the real challenge lies. Getting a better medal unlocks things inside a level, like a Ghost of your best time, gifts, a shortcut, and the Global Leaderboard.

It isn’t just to push yourself to get a better medal, but the narrative incentive as well. Gifts can be given to other Neons, which unlocks more dialogue, side quests, and ultimately, your memories.

While the additional dialogue isn’t always that rewarding, knowing you’re one step closer to unlocking your memories is something that pushes you for that better score.

Controls are responsive, and playing on a keyboard and mouse is probably the most ideal way. The only button you need to keep in mind apart from standard movement controls is “Q”, which changes your current card.

The HUB world has a few places you can visit, redeem coupons, and interact with all the locale. It’s a brief part of the title, but one that gives you some much-needed respite after a long mission. For someone that doesn’t play a lot of visual novels, I found this approach accessible, and easy to follow. It never bombards you with dialogue, but

Levels are expertly designed, and make full use of the cards you’re given as you kill demons, break obstacles, and traverse huge planes with complex geometry. Nothing ever felt overwhelming to me, and figuring out the best path is your primary goal. After that, a quick press of “F” restarts the level instantly, and you can keep on playing for that higher score.

Neon White’s is ridiculously well-paced too. I spent hours zipping through levels, and it never felt overwhelming, because, after a tricky level, you’re mostly rewarded with an easier one where you can let loose and barely touch the ground.

My favorite levels were ones where successive cards always ended up being used almost instantly to create this beautiful sequence of you rapidly moving through the entire thing based on pure instinct.

You can visit previous levels as well, improve your score, and get all the collectibles.

Neon White looks fantastic and has a very consistent art style. It’s a bit like 2020’s Paradise Killer and shares a similar vaporware aesthetic. Characters are beautifully rendered, and highly detailed. There are a few animations for each and the varied iconography pairs well with the ongoing dialogue.

Levels are brightly colored, easy to understand, and with enough detail to create believable environments. There isn’t exactly any particular graphical element that stands out, but everything blends nicely to create visually consistent levels.

The UI is also minimal and gives you only the required information, like your ammo count, or remaining demons. Even in the HUB area, there aren’t many menus to interact with. This clean design is great, and there’s no overflow of information to take you out of the gameplay experience.

Machine Girl handled the title’s OST, and it’s very good. The tracks go well with the game’s aesthetics, and pacing, without ever becoming overpowering. Compared to their other work, this OST feels far more accessible. I’m sure many players will want to check out the band after this.

Guns sound great, and your abilities have neat sound effects too. Overall though, the game has a strong sound design, and Machine Gun’s excellent OST does a lot of the heavy lifting.

Neon White is an exceptional shooter brimming with style and substance in equal measure. The core mechanics are extremely polished and encourage you to get better through repetition, and practice. Despite my early reservations, the characters grew on me as the story progressed, and White is a pretty likable protagonist. Expertly designed levels, Machinae Girl’s OST, and the slick presentation make Neon White a worthwhile experience that you won’t put down easily.

While you are here, make sure to check out our reviews for other Annapurna Interactive titles including A Memoir Blur, Solar Ash, and An Artful Escape.

What did you think of our Neon White Review? Share what you think about it in the comments below.

This review is based on the PC version of Neon White. The key was provided by Annapurna Interactive

Ali Hashmi
Gaming enthusiast, massive soulsborne fan, and a passionate writer. Always on the lookout for interesting games with unique mechanics and design. He loves to write informative guides for newer and ongoing releases.

Kao The Kangaroo Review – A Swing and a Miss

Load more
Neon White Review - Cleaning up Heaven in StyleNeon White is a fast-paced speed-running FPS from Angel Matrix, Ben Esposito, and Annapurna Interactive. Players take on the role of White, who has to compete with other "Neons" for a chance to live in Heaven.
Tech