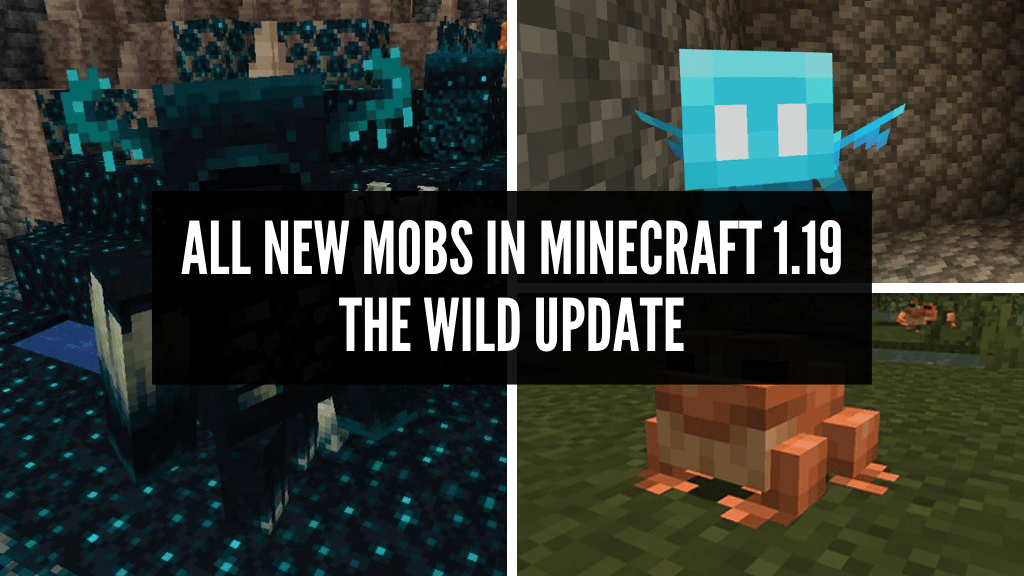 Minecraft 1.19 has further expanded the game as we know it, and millions of players have enjoyed the new content with great delight. Now it’s time to have an in-depth look into the big stars of the Wild Update. The final list with all new Minecraft mobs in 1.19 may be brief (rest in peace, Fireflies) but we want to share all the details possible about these critters!

We start with Tadpoles, which are the baby version of the Frogs. As a fun fact, unlike other baby versions of all passive mobs, Tadpoles are treated as completely separate mobs.

In contrast to the other new Minecraft mobs, they won’t spawn naturally. These cuties come out from frogspawn and will turn into Frogs in 20 minutes, a process you can accelerate by feeding them slimeballs. Noe that you won’t be able to obtain Frogspawn when broken, even if you use a tool with Silk Touch.

You can carry Tadpoles in water buckets, just like some aquatic mobs like Axolotls and Fish. This is particularly useful if you want to breed the Frog variants since you need to place them in different biomes to get the variants. However, don’t place them on land since they’ll panic and will pathfind the nearest water source.

As previously seen in snapshots, tadpoles will panic near Axolots since these pretty critters will hunt nearby Tadpoles and Frogs. Tadpoles have only 6 health points or 3 hearts, just as much as a Parrot or a Bat. We don’t suggest killing Tadpoles since they won’t drop any loot or XP. Besides, they’re too cute!

Also: If you’d love to get started on farming XP and loot, check out the Best Minecraft Mob Farms you can build in Survival or Creative mode!

While it’s true that the Mangrove Swamp biome includes various blocks and items with great potential, the Frogs may have taken the spotlight.

If you’re lucky, you will find groups of two to five Frogs in any Swamp or Mangrove Swamp biome hopping around and, occasionally, croaking and inflating their vocal sacs. They will always try to jump over lily pads and big drip leaves. If they’re placed on land, a Frog will find a pathway to the nearest water tile.

Frogs only get aggressive against small slimes. Just like their real-life counterparts, they will use their tongues to pull the slimeballs into their mouths, instantly despawning the mob.

Of course, expect them to jump really high– up to 8 blocks high, to be more precise! Compared to other mobs, they take significantly less damage from falling, but they cannot jump on top of honey blocks.

We hope that you’re not planning on killing these innocent creatures for leveling up since they only drop 1 to 3 XP.

If you want to breed Frogs, you will need to feed them slimeballs so that one of them will become pregnant. The pregnant Frog will lay frogspawn on top of a water tile with air above, from which Tadpoles will eventually spawn.

The default type, whose design is based on a real-life frog native to Africa (more specifically, the grey foam-nest tree fog), isn’t the only Frog type available. The game also includes a Warm and Temperate variant, depending on what biome the Tadpole grows in.

There’s even an achievement called When the Squad Hops into Town when you get each Frog variant on a Lead. They’re also a requirement for the Two By Two achievement, so make sure to find a Frog in the wild with some slimeballs in your inventory!

Up next in our list with Minecraft’s update 1.19 mobs are the Allay, the winner from the Minecraft Live 2021 voting. They have a natural health regeneration of 2 hearts per second and have 20 hearts total.

You will find these cute fairly-like creatures spawning in cages next to pillager outposts and inside Woodland mansions’ jail cells, meaning that you will need to be fully prepared to face Pillagers face first.

They resemble the Vex spawned by the evoker, but unlike these foul creatures, the Allay is a passive mob. Its playful animations and shiny aspect are easy to spot!

The Allay will wander around until you give them an item, and from that moment it will start following you while searching for dropped versions of the same item. If you want the Allay to stop following you, simply take the item back from it with an empty hand.

They can switch between players to follow depending on who gave him an item last. Their search radius reaches 32 blocks away from the player, and they will follow you up to 64 blocks away from your starting position.

This new Minecraft mob won’t take any damage from its owner if they’re holding an item.Of course, what’s interesting about the Allay is how they react to Note Blocks.

If you play a Note Block near them, it will become their favorite one and will attempt to drop off items to the block for 30 seconds. You will know the Allay has changed focus to the Note Block with a vibration particle.

Did you know? The first time an Allay delivers you an item, you will unlock the achievement You’ve Got a Friend in Me. There’s a more difficult hidden achievement called Birthday Song, which you can obtain by having an Allay drop a Cake on top of a Note Block.

We cannot deny that these new Minecraft mobs are a much-needed fresh breath of air to the game.

But what about the most-anticipated addition to the game?

The Deep Dark and Ancient Cities hold one of the scariest and most innovative mobs in a long time.

From the Minecraft 1.19 update mobs, the Warden is certainly the most frightening and interesting one of them all. After we had to wait longer to see one of the scariest mobs in Minecraft fully implemented into the game, players will have to be extra careful when exploring the Ancient Cities.

The Warden is the only mob spawning in the Deep Dark biome, and you should always try to avoid direct conflict. This is the first fully blind mob, stumbling around as it walks when spawned.

The Warden will spawn in an impressive manner when you trigger Sculker Shriekers three times. A sound effect and Darkness effect will be the feared queues for their spawn.

The Warden guides itself through their sense of smell, detecting, and pathfinding towards the mob or player raising more suspicion based on vibrations. You will see his head’s growths rattle and light up when detecting these vibrations.

If you want to get around a Warden, you must sneak your way. Otherwise, when the Warden has enough time to identify the source of vibrations, it will get instantly hostile and pathfind towards the target regardless of other distractions. At that point, it’s an unstoppable force, going through water without slowing down and showing immunity to lava and knockback.

Of course, you can use projectiles to distract him since they cause major vibrations, so make sure to have enough snowballs or arrows in your inventory. The heartbeat sound and animation speed up as the Warden feels more suspicious or locks into attack mode.

We hope you didn’t invest time in crafting Invisibility potions, since the Warden can still detect you like that. Remember, it’s the vibrations that count!

If you somehow manage to kill a Warden, they will drop a single Sculk Catalyst upon death. With 500 hearts and dealing 30 hearts of damage with its melee attack, your best strategy will always be avoidance and using distractions. After all, a player wearing Netherite armor will only withstand 2 hits.

Even if you try to get some distance from the Warden, it switches to a sonic boom attack, a ranged attack with 15 blocks of distance. This ray will bypass blocks and armor to deal 10 hearts of damage, but can only hit a single target per shot.

These lovely Minecraft 1.19 update mobs have given the community a lot to talk about and discuss. We’re already seeing impressive mob farms for Frogs, and who knows what other interesting ideas players can come up with the Allay’s unique mechanics.

We’re always excited to hear feedback from our players, so don’t hesitate in leaving a comment below. Thank you for reading!