Omno Review: What a Wonderful World 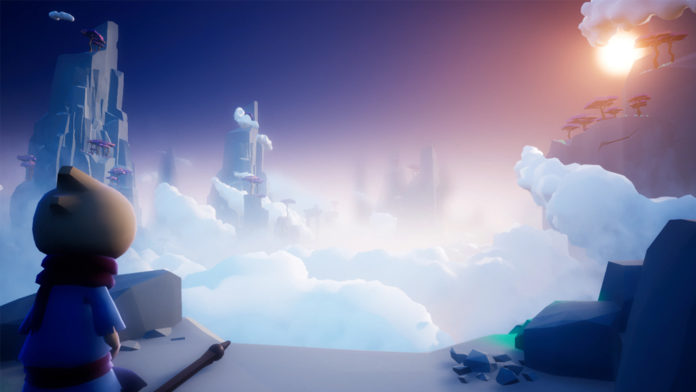 It’s easy to fall in love with Omno just by looking at the screenshots – speaking from experience. But the gameplay is just as dreamy as the looks, and that’s quite rare. Omno, inspired by Journey and Abzu, is a collection of wondrous empty worlds wrapped around an exploration/puzzle game; and it is an experience you’ll want to try for yourself. Gorgeous indie games are becoming more and more popular, and Omno does not disappoint. In this Omno review, I’ll be discussing my experience and why you should (or should not) hop in on the fun.

Omno Review: What is it?

Without anything in the way of setup, you find yourself as a lonely traveler lost in a vast landscape. And that already sets the scene because Omno is all about that, thematically and gameplay-wise. This exploration game (created entirely by one man) drives a sense of relaxing solitude immediately and without hesitation.

But what about the gameplay? Well, it’s a pilgrimage. Different areas have different goals and utilize different mechanics. One time it’s a little environmental puzzle, another it’s some tricky platforming section. The goal from most of these is to find collectible orbs that unlock new areas for you to explore.

The game is not long, and that’s key to its fun – it takes after Journey, not The Odyssey. The environment, cute graphics, underlying “lore”, and the sheer amount of wonder stuffed into this game are what it’s about.

If this type of game had a common motto it would be “it’s the journey not the destination.” Omno’s journey is delightful in so many ways, it’s hard to pick out one thing that makes the experience enjoyable. For the sake of this Omno review, I’ll break down elements I liked but I maintain that it’s how everything was put together that made me enjoy the game as much as I did.

Besides really loving to show off its scenery, one thing Omno loves to do is have you write your own stories. Every new area of the world is so vividly portrayed that you can’t help but wonder what’s its backstory. Details dotted sporadically across the game world help immerse the player in this make-believe universe where enough is explicitly told to get you curious yet not enough to impose a definitive narrative.

Mounting wonder and curiosity are the lifeblood of this game, and everything else serves that purpose. The game world, as cute and mythical as it is, is more of a tool for keeping you curious throughout the game.

For this Omno review, my playthrough lasted around 4 hours. I finished the game in that time. If you’re thinking that it’s short, then you are absolutely correct – that’s the point. This game is a light and relaxing undertaking. Puzzles are not designed to be exceedingly difficult. In fact, if the game had any more content in it some sections would be downright repetitive. But Omno knows when to stop.

Moreover, despite the short playthrough time, the game throws a lot of new ideas at you. I loved the “skiing” parts of the game and I never got tired of the warp animation. However, the platforming sections were great at spacing my favorite parts. The weird puzzles were also delightful, if not what I’ll remember a week from now. In more simple words, Omno is quite self-conscious and it gives you just enough to like it.

Omno’s world is not exactly big, inch-for-inch. But it isn’t the scale that is impressive, it’s how it makes you feel. Foggy mountain peaks, huge floating jellyfish, and island-sized turtles are common sights in Omno. It makes your journey seem so much more significant and large than the mere 5 hours you’ll spend playing.

Even when certain aspects of the environment are not accessible, they’re put there to make you feel that there is much more. And world-building aside, they’re always just so magnificent to see.

There is nothing with Omno that I found particularly frustrating. But there were points where I asked myself why I kept playing. The game is relaxing and gorgeous, but simply shallow and unsatisfying at times.

The game is too obvious

Omno is an obvious game. Just by looking at screenshots you can build an accurate idea of what the game is like in your head. There is nothing wrong with that per se. But it’s just that the game does not add much to its ancestors. Is it flawed? No, but why shouldn’t I play Journey instead?

For an exploration game, Omno is more about moving forward. Maybe that’s the experience the creator intended, but I can’t help but feel it could’ve done with a little less linearity. Personally, I felt it went against the game’s core philosophy of freedom and exploration.

While Omno borrows heavily from Journey, it still holds up on its own. The relaxing atmosphere and well-designed obstacles will keep you entertained for all 4 hours of this short and sweet experience.

If you’re a fan of Journey, get this game but don’t expect the same level of polish. If you’re new to the genre, then you won’t regret trying Omno either. While Omno did not make my list of new favorite games (like Lacuna), it came really close.

This Omno review was written after a single full playthrough of the game. You can find the game on Steam, PS4, Xbox One, and the Nintendo Switch.

This review is based on the PC version of Omno. The key was provided by Future Friends Games

Load more
Omno Review: What a Wonderful WorldWhile Omno borrows heavily from Journey, it still holds up on its own. The relaxing atmosphere, effortless charm, and well-designed obstacles will keep you entertained for all five hours of this short and sweet experience.
Tech