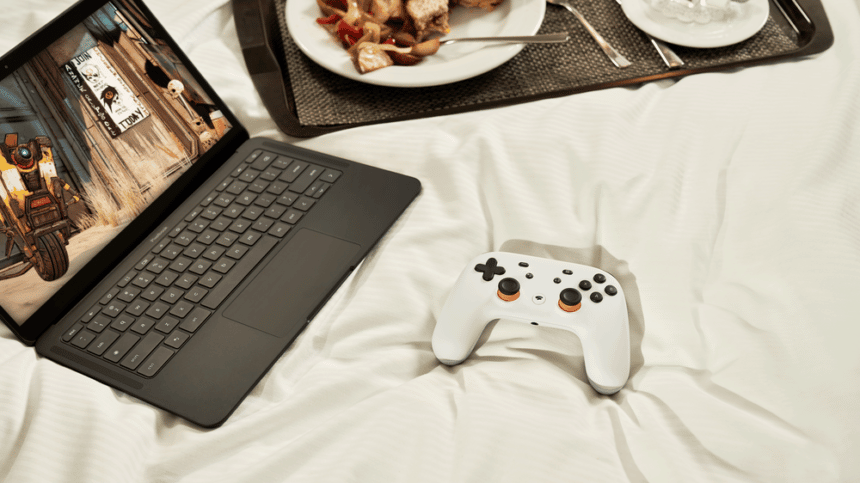 It took just two years and 11 months for Google Stadia Shutdown. For many, this was a great cloud gaming platform that would make gaming more accessible. But for a lot of others, the writing was on the wall, and just like other cloud-based gaming platforms, Google Stadia never had a genuinely solid chance.

Google Stadia Shutdown will be complete on January 23, 2023. Make sure to end any games in limbo and get full refunds for your purchases.

Google Stadia shutdown doesn’t come as a surprise to a lot of people that were keeping a close eye. The company was stealthy about the Google Stadia shut down and didn’t even inform some developers. In all honesty, many people weren’t even aware that Google was providing a cloud-based gaming service. That’s one of the biggest reasons for its downfall. Marketing wasn’t good enough. This is coincidently what Google states in their blog:

“A few years ago, we also launched a consumer gaming service, Stadia. And while Stadia’s approach to streaming games for consumers was built on a strong technology foundation, it hasn’t gained the traction with users that we expected so we’ve made the difficult decision to begin winding down our Stadia streaming service.”

Let’s explore why this gaming streaming service shutdown in just under three years. Several factors led to its downfall, and most of them were pretty evident right from the start. Google is notorious for not only introducing new features but unceremoniously removing them almost immediately. So the fact that Stadia still got three years of on-time is quite a surprise.

Internet quality has been improving a lot over the years, but it is still not where streaming video games is easy or feasible for a lot of people. Google Stadia asks for at least 10 Mbps to stream games, that too at a resolution of 720p. If you want to stream games at a high resolution, you’ll need a lot more bandwidth, 35 Mbps for 4K play.

Take the example of the USA. It has the sixth fastest Internet speed in the world. And yet, nearly half the country is still not hitting the FCC’s definition of minimum broadband speeds. And we’re talking about a country where nationwide Internet quality has been improving for the last four years.

Internet quality doesn’t solely depend on Internet speed. The ping and line jitter are directly responsible for in-game lag. If the servers are located close enough, there will also be a significant lag in the gameplay. This issue is masked when you’re simply streaming video content. Streaming video games that require fast input from the user is a whole other ball game. Any significant lag will make the game unplayable and will result in an unenjoyable experience for the player.

Google Stadia already had a niche market. Combine that with the lack of quality Internet access across the globe, and you have a significantly smaller number of gamers that will be interested in a videogame streaming service. The math is not kind in this scenario, and Google Stadia had to pay the price in the end.

They say the first impression is the last impression. The same stands true for video games and consoles. Google Stadia did not make the best impression at launch. The basic streaming technology behind the service was solid and provided exactly what it advertised. Streaming games on any device. Everything else about it? Well, let’s just say it wasn’t up to the mark.

The service launched with a library of 22 games. That’s right. There were just a paltry 22 games to play at launch. Google also mentioned a free tier, which was nowhere to be seen at the launch of Google Stadia. Combine that with an asking price of $100, and you have a launch that is less than ideal. You’d also pay a monthly fee to access 4K streaming and HDR with Google Stadia Pro. To make matters worse, the PC and smartphone apps weren’t working optimally.

The launch woes don’t end there. The Google Stadia controller is a relatively okay wireless input device. Unfortunately, it only worked wirelessly with Google Stadia and not any other supported platform. So if you were to play a game on your gaming PC or smartphone, you’ll have to connect the controller with a USB C cable. Google also didn’t indicate when the wireless feature would be patched in, and it took 6 months for the company to patch this facility.

While individually, these issues may seem small, when added up, they leave a sour taste. It was very clear that Google simply launched Stadia in an unfinished state. While video games that launch in a broken state can be patched later, a gaming service that isn’t optimized doesn’t have the same leeway. Regardless of its shortfalls, we still think it was one of the best cloud gaming service providers in the industry.

The biggest drawback of this cloud-based gaming service is that you have to purchase games on their platform. It is completely justified from a business standpoint. You’d want to take a cut of every game sale. That is exactly what PlayStation and Xbox do. It is also what Apple and Google do on mobile games. However, gamers are not going to double dip if they already own a game.

You cannot play your Steam library or Epic Games library on Google Stadia. For example, if you’ve already purchased Cyberpunk 2077 on Steam, you’ll have to purchase the game again on Google Stadia. This is a huge hurdle for anyone that is already invested in playing video games.

Another huge flaw in this service model is the actual availability of video games. Google Stadia offers 276 titles for purchase. To give perspective, Steam added 10,394 games in just 2021. Of course, many of them were shovelware and low-effort asset flips, but even if you halve that number, it is still significantly greater than 276 titles. There is a big possibility that any game you love is simply not available on Google Stadia.

Thankfully, Google is offering full refunds to customers. You’ll be able to get a refund for any game purchases you made on the platform. Here’s an article that details how you can get a refund from Google.

Consoles and gaming platforms are made by the games they offer. Sony wouldn’t be a market leader if they didn’t have amazing exclusive video games. In fact, the PlayStation 5 best exclusives are some of the best video games ever made. This is exactly why Microsoft has invested a lot of resources in purchasing Studios and making engaging video games.

Google Stadia, on the other hand, launched with just one exclusive, Gylt. While the game was good, it wouldn’t be considered a system seller or a service seller in this case. Back in 2019, when the service launched, Google promised a lot of features and exclusive video games. Now that the Google Stadia Shutdown is upon us, a lot of promises remain unfulfilled.

Not to say there weren’t any Google Stadia exclusive video games that were amazing. Hello Engineer, PixelJunk Raiders, Outcasters, and PAC-MAN Mega Tunnel Battle were a few notable releases. They weren’t must-have games, and it shows in how well Google Stadia did.

Hopefully, the Google Stadia exclusives will find a new home and release on other platforms as well. Outcasters however, is going to die along with Google Stadia as it relied heavily on the technology offered by Google Stadia.

Google Stadia tried to appeal to gamers who didn’t like the idea of being tied down. However, any serious gamer would at least have one hardware-based local gaming platform. The idea was to provide AAA Next Gen gaming experience to people who don’t own a console/PC. Sure, if you wanted to play Red Dead Redemption 2 on your smartphone, Google Stadia allowed you to do that.

However, if you are already a gamer, chances are you own at least one of the major consoles. If you have Xbox, Microsoft cloud gaming is leagues ahead of what Google Stadia offers. If you have PlayStation, the new PlayStation subscription services allow you to stream games directly to the console or PC (although it is limited in scope).

Our year after Google Stadia launched, Microsoft integrated videogame streaming functionality into their popular Xbox Game Pass. The Game Pass would allow gamers to stream titles on not only just a console but also android smartphones and tablets. It also offers cross save functionality, so you can take your games anywhere you want.

With an ever-expanding library already available on the subscription service, you didn’t have to pay additional money to play games. Although Xbox can’t stream every game you own, Game Pass is still a remarkably good deal.

So who was Google Stadia for? Hard-core gamers that craved AAA gaming experiences but weren’t keen on investing in a home console or a gaming PC. Also, folks that have quality Internet access without any bandwidth limitations. I’m not a statistics guy. The overlapping circles in this Venn diagram seem super small.

The idea of buying a game and then getting to play it on any screen in your house is an exciting one. And from what I’ve heard, when Google Stadia worked, it worked. But we’re not there yet. It is going to take some more time for people to fully embrace a digital gaming future.

There is a huge number of gamers who love the idea of ownership, even though we are just licensing games on any platform, be it PlayStation, Xbox, or Steam. There is a sense of ownership there, even when you don’t own a game. Google Stadia had good intentions but failed in multiple disciplines, from marketing to exclusives and from odd business practices to being feature incomplete. This is why the Google Stadia shutdown isn’t a shock.