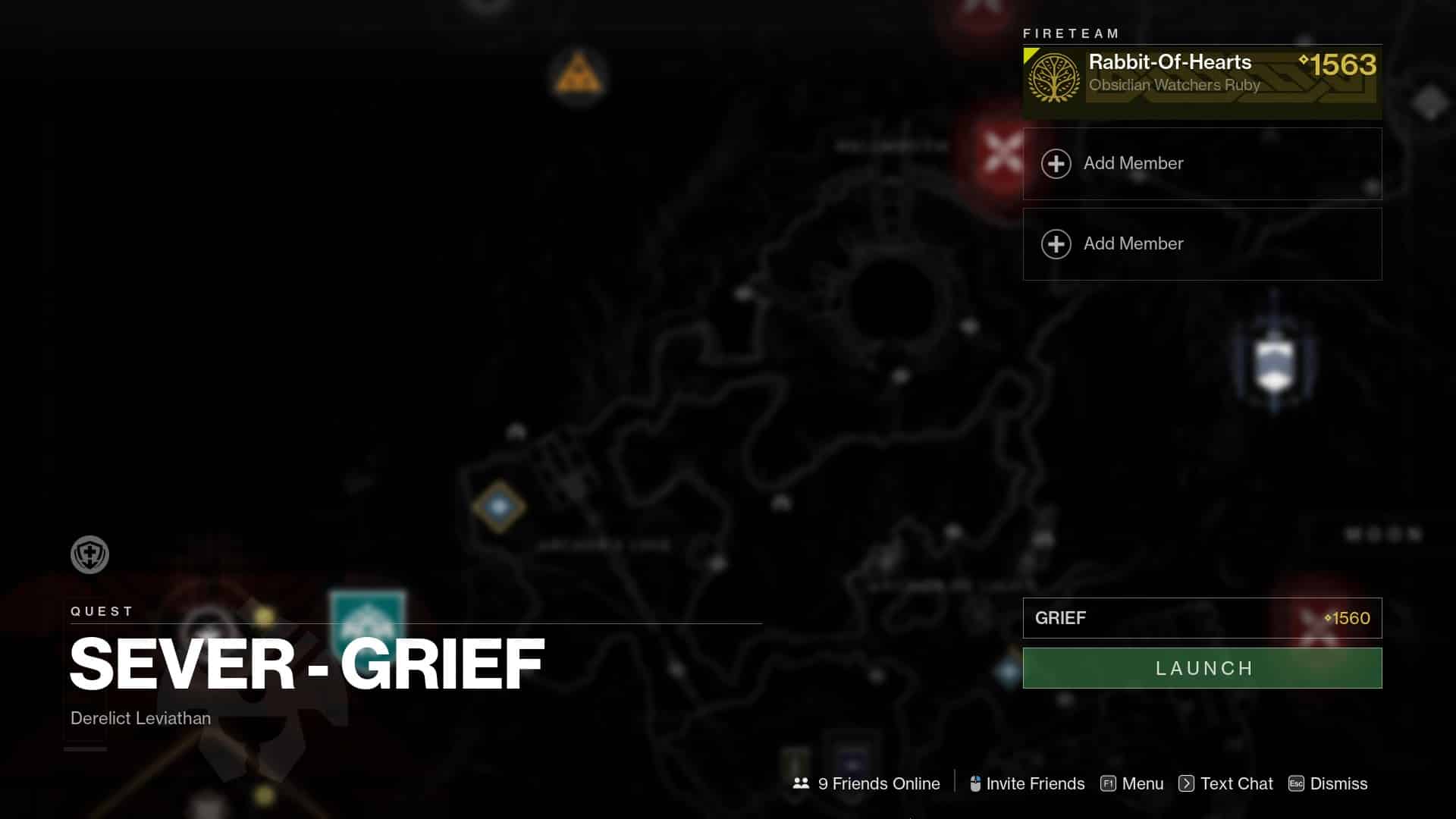 Sever – Grief is the newest Destiny 2 Sever mission. We’re done and dusted with Crow – now Zavala is in the firing line.

If you haven’t done Sever – Grief as a part of Bound in Sorrow yet, do. We’re getting a lot of good backstory on Zavala including what might just be the best cutscene Destiny 2 has ever had.

Compared to Shame and Reconciliation, Sever – Grief is pretty easy and straightforward. All the same, I’ve put together a guide to help walk you through the mission.

One thing I need to mention before we start is that the Togetherness modifier is active. This means that unless you’re near another player, your health regen will be painstakingly slow. If you’re trying to solo this mission, you’ll want a way of healing like Well of Life or Devour.

You’re going to spawn at the bottom of a ramp, walk up it and you’ll be facing a fenced-off area that’s full of Arc electricity. Needless to say, if you touch it, you’ll die.

Proceed through the hole and you’ll be in a greenhouse-type room full of massive hanging flower pots, Cabal, and Scorn. Clear the enemies out and continue through the area towards your quest marker. This entire part of the mission is linear, so don’t worry about missing something or getting lost.

Eventually, you’ll reach the room for the first amplifier. Place it and a door will open. Go through the door.

Before you continue, stop. As soon as that door opens after the first amplifier, turn left and go between the boxes. There’s a tiny little area just behind them next to a locked door. The Calus Bobblehead for Sever – Grief is in there. Pick it up before you continue.

You’re going to be back facing another electrical grid. Once again, touch it and you die.

Next to the grid will be an Egregore spore, take the buff from it and head through the door opposite the spore, then pass through the Egregore barrier.

In front of you, there should be a long corridor with an off-shoot to your left that brings you back to the electrical hazard. Head forward down the corridor and take the Cabal Wrench at the end of it. Three Scorn will spawn when you pick it up – just give them a wack with it and you’ll be fine.

Bring the Wrench to the electrical hazard (you can’t pass back through the Egregore wall, so take a right coming back up the hall with the wrench).

Facing the gate leading out to the hazard, you should be able to see a strange assortment of boxes create a ramp around the gate. Jump on those boxes and follow the path until you’re in the rafters above the electrical hazard.

Navigate through the rafters until you’re back at the Egregore spore, then use the Wrench on the Cabal terminal in front of you. This will disable the electrical hazard and let you move forward.

You would think that it would be safe to cross to the next area now. You’d be half-right. As we all learned during Grasp of Avarice, water is the Guardian’s biggest weakness. The area that you just disabled electricity on is full of water – with a very small walkway. Take your time going across it; put one toe in the water and you’re dead.

On the other side, you’ll find a terminal to release a containment lockdown – use it.

Containment – Clear Out the Festering Scorn

On the other side of the door, you’ll enter the Containment area. There’ll be a bunch of Scorn in here that you need to kill – your progress is marked as a percentage next to your objective.

Kill all the Scorn and follow your objective marker to place the second amplifier.

Follow your objective marker to the back of the Containment area. Once you’re there, look up and you should see a massive cylindrical jumping puzzle. You need to get to the top of it.

Needless to say, this will be much easier for Hunters and Warlocks than it will be for Titans, but as long as you don’t rush and time the platforms, you should have no issues reaching the top.

At the top, you’ll need to stop for a second to watch a conversation between Zavala and the Nightmare of Safiyah. Once they’re finished, proceed through the now open door and place the final amplifier.

After you place the final amplifier, follow your objective marker down the ramp next to you. You’ll come out in some sort of exhaust pipe system that acts as another slight jumping puzzle.

Make your way to the very back of the puzzle and activate the Egregore spore you find there. Right behind you, there will be an open pipe in the floor. Fall down through it and follow it until you reach a large drop.

Defeat the Nightmare of Kethiks

Take the large drop-down and speak with Zavala to start the Severance Ritual.

Rather than the Fanatic, this time around we have the Nightmare of Kethiks. Kethiks is the Fallen Captain responsible for killing Safiyah and Zavala’s son – just in case you’re wondering what the connection is.

This boss fight is remarkably straightforward. When Kethiks spawns in, he’ll have a health bar segmented into three separate bars. Once you deplete the first bar, he will teleport away from the arena and spawn in a bunch of Scorn. Kill the Scorn, and Kethiks will spawn back in. Do this two more times and the boss fight is over – just like that.

You’ll get a Solar Scythe or two over the course of the fight, but other than that there’s no additional mechanics or anything of that nature – just hit things until they die.

That’s that! Zavala didn’t manage to beat his demons this time, but Sever – Forgiveness will change that.