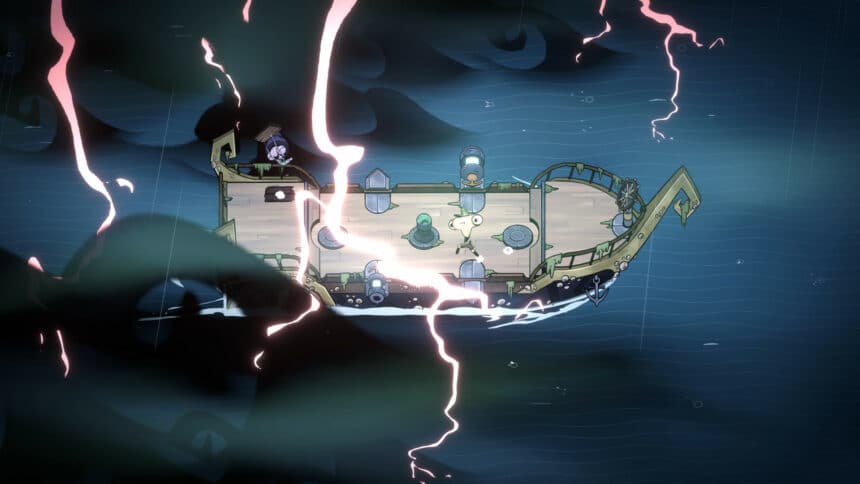 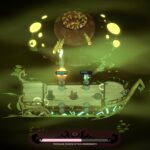 With Fika Productions debuting in the gaming space and teaming up with publisher Team17, we are treated to a stellar game debut for Ship of Fools, packed with many things to do. Here’s our in-depth review.

The Great Lighthouse that once protected the Archipelago is broken, and a storm of malice and corruption is coming. You and your shipmate will hop aboard The Stormstrider and make your voyage across the sea. Man the cannons, ready your sails, and protect your ship from sea monsters over multiple runs. It’s up to you to defend your home from the almighty Aquapocalypse.

In a clamshell, Ship of Fools is a game about blasting away your seaborne foes with mighty cannons as you defend your ship. Inspired by modern classic roguelites and built for co-op, you’ll want to bring your first mate on deck and enjoy frantic combat as you unlock new trinkets and artifacts to help you save the world from catastrophe.

Or you can play this alone if you’re the hardcore gamer type.

Ship of Fools has some cutesy art style that reminds us of similar game titles like Don’t Starve Together and Cult of The Lamb. The combat mechanics are simple but where Ship of Fools shines is in letting the players adapt to different battle scenarios.

There are some encounters where you’re just chill and are going with the motions, and some that will get you up on your feet as you try to defend your ship against various adversaries. Your characters don’t have health bars, but you must ensure your ship is intact, from wood-biting critters to glowing sticky bombs.

The game also supports both gamepad and keyboard and mouse control inputs giving players the flexibility to choose their preferred play style. However, we do recommend playing with two controllers for a good co-op experience.

You can simply pause the game if you want to have a look at the controls for each supported input device.

Ship of Fools also has a well hyped soundtrack that kept me on my toes, and I like how the music becomes muffled once the Stormrider is in critical damage.

This roguelite game actually caught me by surprise with the amount of content that it has in store for you. The gameplay loop of Ship of Fools is pretty addictive despite this formula already being used in popular titles like Hades and Dead Cells.

The characters are pretty goofy to interact with, giving us some vibes of Animal Crossing whenever they speak in gibberish. Ship of Fools lets you uncover hundreds of trinkets and artifacts, and you can create the perfect ship for long hours of exploring the deadly seas.

A feature that I wish this game had was the ability to have separate saves so you can get to experience the difference between playing alone versus with a friend. Apparently, once you start your journey to the seas, your offline and online progress are integrated. But despite this, Ship of Fools brings a great amount of challenge to keep you busy for the whole weekend.

Another feature that I was looking for while doing my playthrough is learning more about enemy lore. I couldn’t find a portion in The Great Lighthouse for a resource. Usually, some games have a Collections guide where we can see discovered enemies, unlocked Trinkets, and more.

But during my Ship of Fools review, I couldn’t find it (or I’m just bad at map directions).

You can strategize with your friend on which course to take through the hexagonal map. Each map icon has a different meaning. It felt like the Ship of Fools map got its inspiration from Oaken, a turn-based strategy game that we reviewed previously.

Each world area had its own flair: Swamps, violent waters, and a bit of ice. There are also unique hexagons to discover when you’re exploring each of the areas.

It’s up to you and your buddy which path can yield the highest rewards or the highest survivability. For starters, we recommend looking for shield hexagons early game instead of occupying your cargo holds with wood. This will ruin your chances of getting better ammo.

The more sea exploration runs you have in this game, the more ship content you unlock. You’ll be surprised that there’ll be new characters just popping out whenever you do a certain achievement. There are also unique hexagon tiles that you can discover while exploring the seas, giving you more access to shops.

You can upgrade Stormriders cannons and gain other enhancements by spending Tendrils which are denoted by a jellyfish icon on the map. We also like the part where you get rewarded with extra Tendrils whenever Stormrider gets wrecked. It can get a bit competitive in achieving a high score.

The team over at Fika gave us a wonderful variety of cannon ammo, artifacts, and trinkets to discover. Ship of Fools gives players the freedom to decide which cargo to keep. My favorite so far was the oil and fire-based weaponry giving us an unfair advantage in our exploration runs.

There are also some “super bomb” weapons that recharge at every encounter, and we tend to use them against area bosses. Every level that you also clear will give you an additional cannon unlock based on our observations when making it to a certain world area.

Ship of Fools is playable in both solo and co-op, but we recommend playing this title with a friend. The game also supports Remote Play on Steam, so if your friend doesn’t have a copy of the game, you can invite them to join. During our playthrough, we didn’t experience any network lags, so it didn’t ruin our chances of beating the chaotic hordes of enemies.

I also tried playing this game solo, and Ship of Fools gave me a tough challenge. While there’s no AI sailor that can accompany you, your ship will become equipped with an automated sentry cannon to make your life a bit easier.

We like that Ship of Fools allows you to play this solo, but its main selling point is that you can play it with a friend on a single PC. This game has done a fantastic job so far at making couch co-op great again this 2022.

In my almost 12 hours of playtime, both solo and co-op, I didn’t encounter any game-interrupting bugs, and the immersive experience of exploring the seas kept me hooked. The best part is, for a debut game from a not-so-well-known developer, I didn’t feel like Ship of Fools was an early access title, unlike other games that claim to be fully released, only to find out that the overall game isn’t polished.

Even if you’ve poured in hours of gameplay in this chaotic ship survival game, every voyage is unique, and the game still gives away an ample amount of difficulty despite having better ship upgrades.

Ship of Fools is one of the best sea-themed co-op roguelites that you can play in 2022 that features a ton of content. Tailor your ship according to your playstyle, strategize and beat sea creatures, discover valuable merchants, and seek the best loadout for clearing an entire run.

We hope you enjoyed reading through our Ship of Fools review. If you’re scratching your itch for a great couch co-op title, then now is the time to grab this game on Steam, and who knows, we might even see this title as a potential candidate for the 2022 Game Awards.

This review is based on the PC version of Ship of Fools. The key was provided by Fika Productions and Team17. 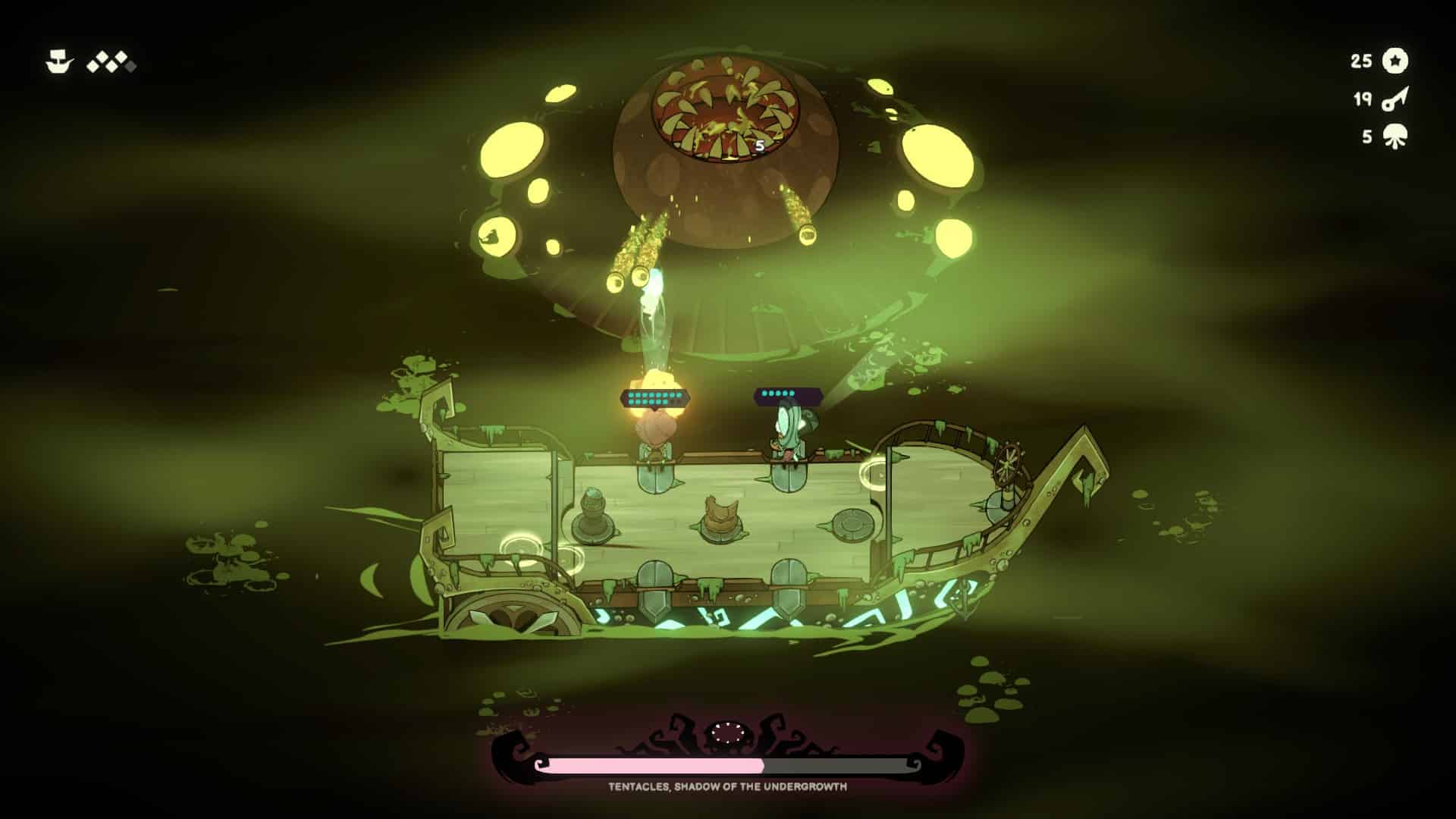