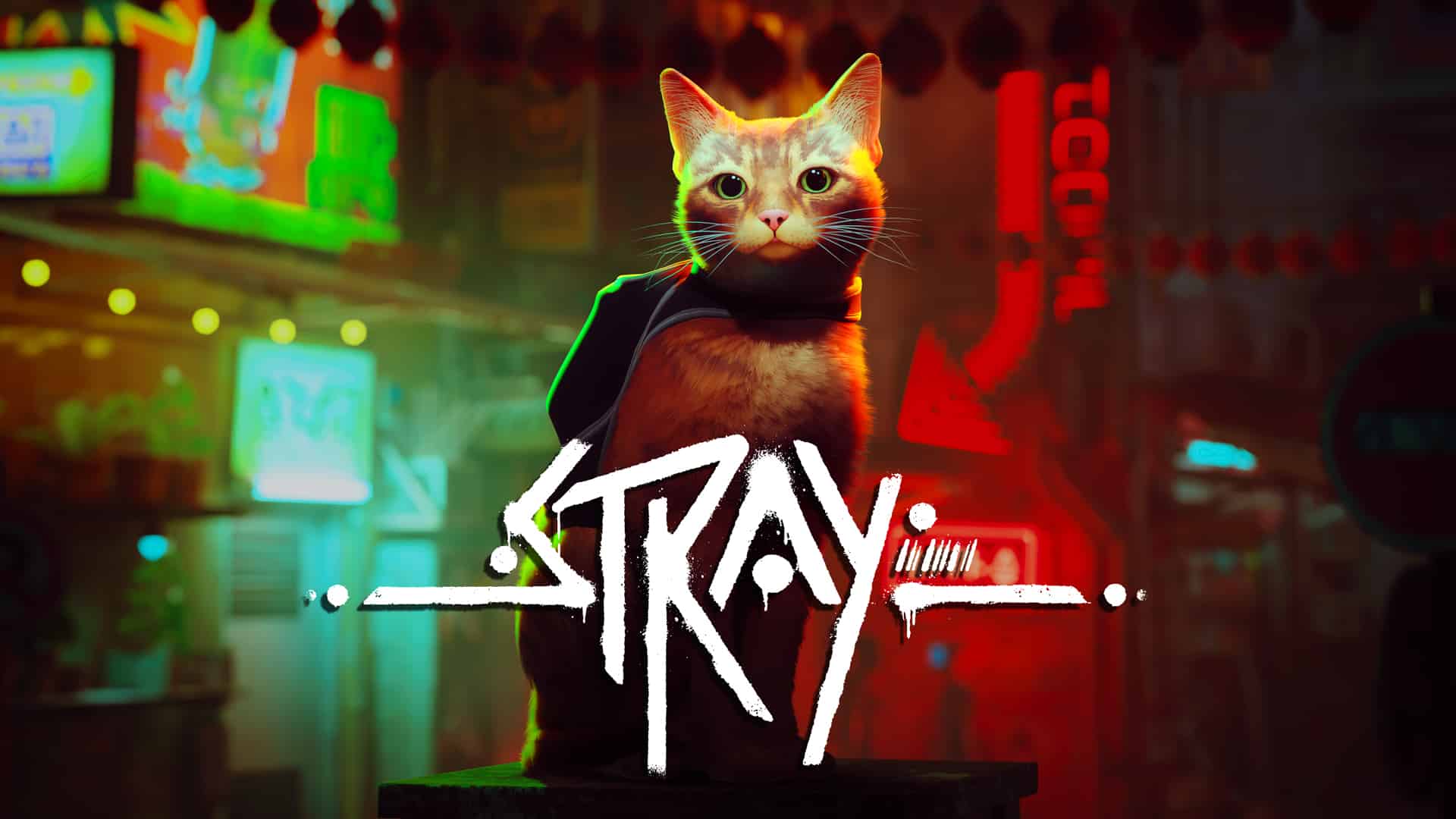 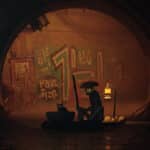 Stray was first announced in 2020 and had a very cryptic idea behind it. Many fans were blown away at the idea of being an animal and not causing mayhem akin to games like DEEEER Simulator and the Goat Simulator series. With a serious story, a fluffy protagonist, and a little robot to join you on your adventure – Stray is EASILY one of the most unique indie games we have had in a while. In our Stray review, we take a look at this incredibly memorable title.

Stray is not your typical animal adventure simulator – you are a simple orange cat that gets separated from its family and is forced to find its way back to them. Along the way, you encounter a hidden underground world inhabited by robots who are looking to get rid of an organic menace called Zurks. Creatures that are similar to the headcrab from Half-Life.

Along your travels, you meet a charismatic and lively cast of Robots, each with a unique personality, and a good backstory, and despite the absence of humans in the game, the robots really do a good job of filling their place.

When you visit one of the multiple worlds Stray takes place, each robot has its own thing going on. They’re dancing to music, own laundromats, a computer hacker, and many other roles portrayed by humans. Interacting with them brings a lot of unique and interesting dialogue that helps build the lore of the world and gives you some backstory.

To join you through the perilous journey is B-12. Attached to the cat via a vest, the small drone that acts as a translator between the world, and the robots to communicate with the player. B-12 is also an interesting component of the story, and with the help of a collectible known as Memories, you will help further build the lore of this incredible game with a character who is always by your side.

Playing as the cat, you really only have a few buttons. You can run, meow, and parkour your way through the levels with a jump button. That’s about it.

The real challenge of Stray comes from combining puzzle solving in the environment, doing some main story missions, and some side-missions in the world in exchange for rewards with these abilities. Your rewards are always something enriching and help adds to the lore of the world.

B-12 is your constant companion who keeps you on track for your objective. It also doubles as a flashlight, and is a quirky companion. The relationship that forms between the cat and the drone is truly something unique, and it leads to the formation of a unique and memorable relationship between machine and feline.

Stray also does a great job of portraying realistic cat-like behaviors and characteristics. The developers really put a lot of effort into ensuring a genuine and authentic experience of what it would be like controlling a cat in a world without humans. One instance of this is how some puzzles in the environment can only be solved by you pushing an object off the edge of a very high surface.

All in all, there isn’t much when it comes to the mechanics. You have no special abilities or powers. The minimalistic approach to controls leaves you focused on enjoying the game, and solving the few puzzles that come your way as you play the game.

I fell in love with the simplicity of the controls and found it to be a thoroughly enjoyable experience. I know it’s a cat, and I know what to expect from a feline, anything extra would have hampered the experience.

The graphics of Stray, even on the last-gen consoles, is spectacular. The game looks even more stunning on the PS5 and PC with better detail to reflections and the fur.

Despite the packed world of Stray, I seldom had frame drops even in its most chaotic scenes.

With a wide array of environments and set pieces in the story, you will have no shortfall in admiring the beauty in the world. This is consistent no matter the console you are playing on. While the PS5 and PC versions will obviously yield a superior framerate and resolution – the game is still an enjoyable experience.

Stray is a marvel from beginning to end, regardless of platform. However, we recommend you experience the game on the PS5 or PC, unless the PS4 is absolutely your only accessible console.

Coming to the sound, the game has a lot of variety. There are moments where the game has silence to match the ambiance of the environment you’re exploring, and when you’re in a relevant sequence, the music adequately amps itself up to a good tune to get that determination to survive the encounter.

The game has no voice acting and instead uses robotic sounds when interacting with the characters around the world, but even those sounds are expressive and very detailed in their delivery.

The soundtrack is a mix of electronic with a little bit of instrumental, but it does a great job of fitting with the world and theme of the game.

Stray is a game that has cemented a place in my heart occupied by games like Journey, Untitled Goose Game, A Plague Tale, and many others that came out of nowhere and just built a permanent place. These are games I will recommend to anyone who isn’t a serious or a hardcore gamer and will know that they will enjoy the experience.

Stray is a unique game that takes you on a brief yet memorable adventure through a multitude of settings, and characters, and most importantly, helps you appreciate the effort put in by the developers.

I can safely say that Stray lived up to the hype, and delivered on one of the most definitive experiences in games that many gamers may dismiss in the paltry 10 or so hours to 100% the game, but you walk away with memories and something you will definitely cherish.

While you are here, make sure to check out our reviews for other Annapurna Interactive titles including A Memoir Blur, Solar Ash, and An Artful Escape.

What did you think of our Stray Review? Share what you think about it in the comments below.

This review is based on the PS4 version of Stray. The key was provided by Annapurna Interactive 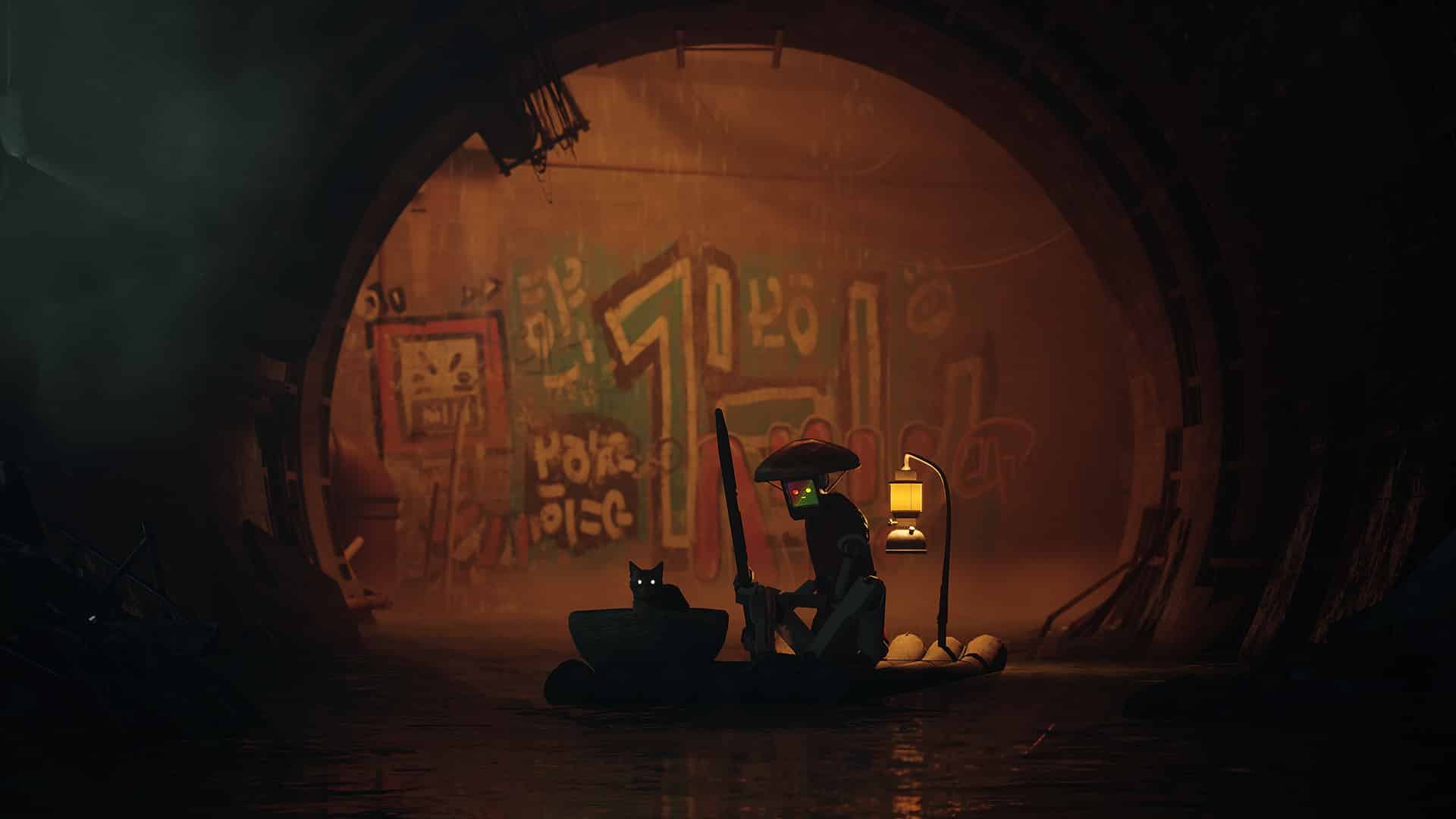 Review Overview
Awesome 9
Overall Score 9 out of 10
Good Stuff The game has a great soundtrack that compliments the action on the screen Simple and minimalistic approach to controls that don't complicate the game A unique and memorable story that few games ever achieve Even on older hardware, the game looks and plays really well
Bad Stuff Only takes 10 hours to fully complete the game The lore of the game feels lacking unless you go out of your way to collect memories and badges
Summary
Stray is an adventure game from Annapurna Interactive and BlueTwelve Studio that follows the story of a Cat as it traverses a Cyberpunk city interacting with different robots.
TAGGED: Annapurna Interactive, BlueTwelve Studios, Stray
Share this Article
Facebook Twitter Email Copy Link Print
What do you think?
Surprise0
Love0
Sad0
Happy0
Sleepy0
Angry0