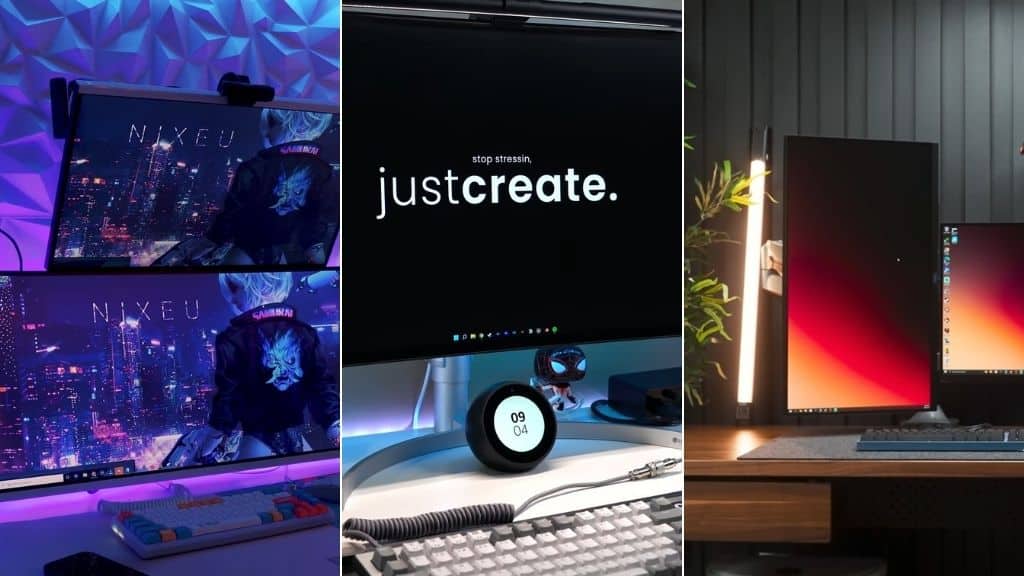 Technology is rapidly evolving and we’ve seen a lot of gaming setups withstand graphical changes through the years. Also, with streaming becoming a norm since the pandemic, we’ve seen other content creators step up their game.

Last year has been a crazy ride for NFT games and unfortunately, it looks like the graphic card shortage is still going to be a problem this 2022.

But don’t lose hope, if you’re that person who’s seeking the best gaming setup and you’re looking for inspiration or upgrades that you might need for your rig, then you’ve come to the right place!

Here’s a fresh list for you to explore and what we’ve noticed for this year is that majority of streamers and content creators these days are going for the minimalistic look.

This is probably because of the fact that a lot of us have been working from home because of the COVID-19 pandemic and most people have gotten creative in sprucing up their spaces for where they work and play.

It’s up to you to rank for yourself which of these rigs would suit your personality ranging from casual to hardcore monster builds.

Some people are lucky to have the budget to pull off a hybrid setup and here’s a $35,000 build from Big E where he separates his work and content creation setup from his gaming setup.

With the Apple M1 series rising in popularity, it’s no surprise that other content creators such as Big E are investing in these types of monster machines.

Watch his YouTube video below for a more in-depth tour of his content creation and gaming studio.

Here’s a nice and clean white setup we found from Cole Caccamise, a very underrated tech YouTuber where he shares his desk setup used for content creation, games, and work for his other passions such as web development.

We actually hung around his YouTube channel for a bit and we saw that he also did a quick gaming test on his 16″ MacBook Pro. You can also watch it here in case you’re curious.

Check out his video and see all of his other nice-to-have accessories along with this beautiful setup.

Like what his wallpaper says, “Stop stressin’, just create”, learn more about his detailed setup below.

Spratt is a Call of Duty content creator and here is his gaming, streaming, and work from home setup from his new house. One thing that we loved about this desk setup aside from how clean it is, you wouldn’t notice that he has a PlayStation 5 as part of his setup.

Some might get turned off by the cable management as he brings it up during his setup tour video but nonetheless, this is one of the best gaming setups that we’ve seen on this list.

The Dyson and fake IKEA plant in the corner has a nice touch. Watch his gaming setup and room tour below.

Boss Lucio is one of the well-known stream coaches and tech review content creators in the Philippines and he amazes us with his small room setup where he maximized every space.

Rocking a two-monitor white and grey-themed PC gaming setup, we love the balance of putting a 3D and solid wall in his background to give his room more depth. Not to mention the RGB drop ceiling aesthetic that his interior designer did to make the room seem bigger.

Check out his video and see how he was also able to sneak in his vlogging area plus all of his other awards and sponsored items that he has achieved in this small setup.

Here’s a gaming and streaming setup by The Video Nerd where he went all out with his accessories. What’s awesome about his $380 AZZA case is that it looks so futuristic and it’s tucked away in the corner and you barely notice it.

You gotta appreciate how he was hands-on with setting up his IKEA desk.

Not to mention his monster storage for all his videos making his gaming setup a luxurious productivity setup as well.

Overall, The Video Nerd has pulled off a smart streaming and content creation setup thanks to these crazy upgrades.

Take a look at his video below for his step-by-step process on how he was able to pull this off. The cameras and PC case were overkill if you ask me.

This minimalistic battle station has got to be one of the best gaming setups that we’ve seen so far from YouTuber Too Much Tech. We love the clean white finish that this setup brings. Not to mention that the mini-ITX build actually has an RTX 3070 inside.

Some people might be skeptical about the cooling but as long as your room has good ventilation, you wouldn’t need to worry about overheating.

Check out his video and see all of his other nice-to-have accessories along with this beautiful setup.

We bring you another ultimate gaming setup from GutzyAiden, a 22-year-old Twitch partner, where he and his dad created this spacious and clean monster gaming and streaming room.

For this setup, we actually want to highlight his wall because he put a lot of thought into what his streaming background is supposed to look like so that viewers can be more entertained with the aesthetics of the room.

Also, if you see his wall background during his Twitch stream, he sometimes uses his fourth monitor as his racing sim area.

Watch GutzyAiden’s video below and appreciate the time and effort that he put into his ultimate gaming, streaming, and productivity setup!

You’ve seen the clean white minimalist build but we found another insane mini-ITX setup – this time rocking an Nvidia RTX 3080 and an AMD Ryzen 5 5600X processor.

The table used here is a solid wood handmade standing Sway desk from ergonofis, which feels pristine and comparable to an IKEA Karlby countertop in terms of its wood material (if you want a cheaper option), giving the rig an executive and modern feel.

As a bonus to this minimalistic setup, Vidoza even placed a Narwhal T10, a 2-in-1 robot mop and vacuum with an automatic mop cleaning station. How’s that for a tidy setup?

Watch his video below and immerse yourself in his ultimate gaming setup.

Here’s a tour of a streaming, YouTube, and entertainment area from 17-year-old content creator and Twitch streamer Slush.

We loved how he designed the lighting of his studio with the Govee lights as well as the minimalistic stream background giving his place a nice touch.

For his desk, he used a combination of the IKEA Ekbacken countertop and Alex drawers to keep his white theme aesthetic in place, topping it off with a Gutzy Aiden Aqua XXL mousepad.

If Aquaman had a gaming safehouse, this could be it. See what’s in store in his studio.

Less is more is becoming popular when it comes to gaming and productivity setups and this black and white themed station from Geek Street just puts the icing on the cake.

Geek Street added some Govee lights at the back of the monitor to give ambient lighting to prevent eye strain.

This station is for gamers who are not really into flashy PC gaming setups and is always on the go so you might want to consider this clean setup.

If you’re building a productivity/entertainment area for your family, then you might want to consider Geek Street’s setup.

We have another gaming and streaming hybrid setup by Dana Danucd, more known as “DanucD”, a popular PUBG Twitch streamer and content creator and she has made one of the cleanest gaming setups on this list.

Being an official partner for Logitech, it’s expected that you’ll see a lot of Logitech gear in her room like these gaming mice over here.

Additionally, the mic and camera setup look so nice and it doesn’t feel distracting. As Dana mentioned in her gamer house tour, she has both a streaming and gaming PC in her minimalist-designed room.

We couldn’t see in the video where exactly her gaming PC is even though she mentioned that it’s there but her streaming PC matches really well with the overall white aesthetic in the room.

Watch the video below to have a glimpse of her gamer house in Latvia.

While most of the setups that we’ve been featuring are inspired by minimalism, here’s a cramped-up rig by Daniel Henry. He doesn’t claim to be a minimalist but the video editing in his tour reminded me of a mix of Stranger Things and Mr. Robot vibes.

Even though he’s a casual gamer (we’re looking at you Nintendo Switch), we can’t help but feature his setup since it has massive gaming capabilities aside from his passion for filmmaking, digital art, and 3D rendering. Who knows, we might see some games that he designs in the future.

Although the monitors that he has isn’t really optimized for hardcore gaming, at least he made up for it with his monster PC build. We appreciate people who don’t really force themselves to upgrade (only if necessary) because it’s the current trend and this build is just one of those setups.

Watch his video below and indulge yourself in this British chap’s ultimate filmmaking and gaming setup.

What we loved about this setup is that he hides his compact PC well and the desk looks so clean with the dark wood texture matching the black and white vibe of his house.

Although he mainly uses his PC for editing, his tiny machine is enough to do some gaming and streaming as well.

Watch his behind-the-scenes video on how he was able to design his house along with this cool and clean PC setup.

Here’s a clean setup by David Amaya, also known as Side of Tech on YouTube where he showcases his dream all-in-one home office and gaming room.

We do get that most of the GPU prices for this year are still inflated but David managed to show us a clip of him playing Far Cry 6 on ultra settings using last-gen PC parts.

Watch the video below to have a peek at this Side of Tech (pun intended).

The last setup on this ultimate gaming setup that we want to feature is somewhat unique because it’s a massive game room that’s a size of a house!

SeeJayAre is one of the underrated gaming and tech content creator that we discovered on YouTube and he’s got everything, from the retro arcade consoles up to the next-gen gaming consoles.

We gotta appreciate how well he organized his big room. Every nook and cranny of this room has a theme like a Nintendo area, Sega area, toy collections, arcade area, and more!

While it’s gonna take forever to list down his family’s plethora of gaming collectibles, you can immerse yourself further in his game room tour video below.