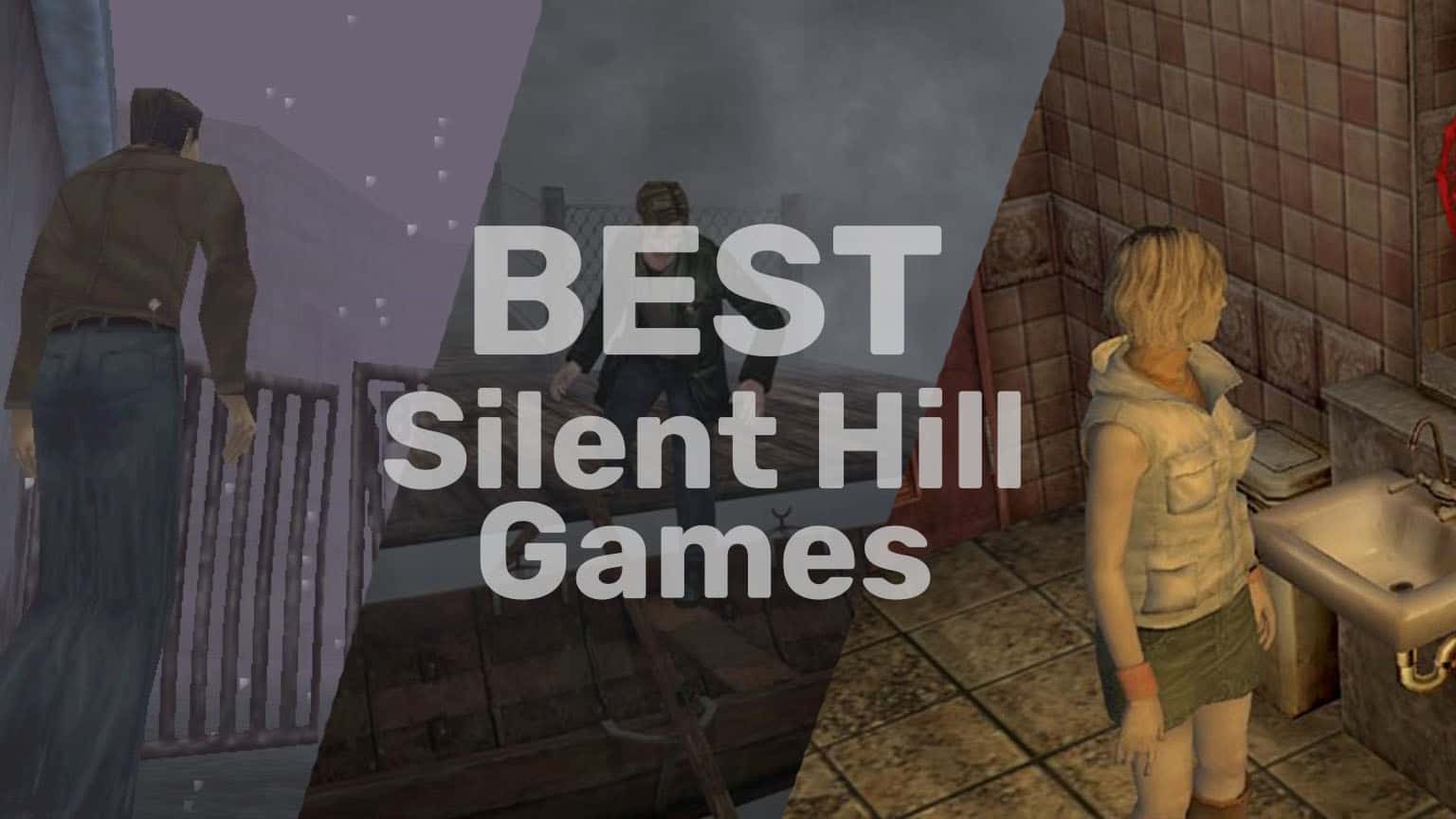 There have been a lot of Silent Hill titles. Some were great, some less so. For the sake of brevity, and for your sanity, we’re only going to be looking at the eight main series titles while ignoring the spin-offs. Not to worry, though, the best Silent Hill games all come from this collection.

What we’ve chosen as the best Silent Hill game might not be your favorite, so don’t get mad if you disagree. Just leave a comment and let us know why!

Silent Hill should have been closed out with a reboot directed by the legendary Hideo Kojima and Guillermo Del Toro. Unfortunately, we never got to see this vision for the franchise realized. What was left was the bitter taste of Downpour as a series that defined horror games that died with a whimper.

Silent Hill: Downpour was developer Vatra Games’ first, and only, attempt at recapturing what made the original trilogy so successful after the franchise had steered off track. While reviewers praised the effort, the inexperience of the studio showed with the title suffering from clunky controls, a poor combat system, and an overall lack of polish that inadvertently led to Vatra Games going bankrupt.

Despite receiving a mixture of average and positive reviews from critics, Downpour has not aged well. Unknowingly being the last entry into the franchise has left a dark cloud over a game that was more disappointing than anything else.

Had Silent Hills not been canceled in 2015, it’s possible that we would be looking back at Downpour in a different light. Unfortunately, that’s not a reality we’ll ever get to explore.

Homecoming was the sixth entry into the series and an inexplicable deviation from the formula that made Silent Hill great.

This was the first of Double Helix’s two attempts at an entry into the saga and was the second game developed by a Western Developer. The difference in regional styles was apparent here. In fact, the differences were so bad that Konami never even bothered localized the title for a Japanese audience.

Rather than forcing players to flee in terror, Shepard is more than equipped with the skills needed to weave, dodge, attack anything that the game throws at him.

This turned Silent Hill: Homecoming into a glorified action-adventure and a laughable entry into what is one of the most prolific horror franchises of all time.

Origins was the first game in the series developed by a Western team. Unlike Double Helix, Climax Studios did a significantly better job at sticking to the themes that made Silent Hill great in the first place.

Critically, the game gets some slack as the first in the franchise developed for a portable device (PSP). While Konami made a port to the PS2 in 2008, it came a year after the initial handheld release.

Origins follow Travis Grady, a trucker trapped in Silent Hill after rescuing a young girl from a burning house. The game was the first in the franchise to connect two titles together. It also served as a direct prequel to the original Silent Hill (1999).

It was a bold stroke to have the first interconnected Silent Hill title developed by a Western team, but one that didn’t ultimately fail, even if Origins wasn’t a standout entry by any stretch of the imagination.

Silent Hill 4 was the final installment to be created by Team Silent. While it didn’t quite live up to its predecessors, the team’s expertise and style still permeated the title, even with the dramatic change in direction.

Players switch between third-person exploration of Silent Hill and first-person investigation of an apartment. You revisit this apartment regularly as the story progresses (hence “The Room.”) Despite what some consider to be an intrusive change to the formula, there’s little doubt that Silent Hill 4 maintains, and even improves on, many of the horror elements that made the first three games memorable.

While many of the areas you explore are rehashes of locations from the original game, and despite clunkier combat mechanics, Silent Hill 4 has its moments and is well worth a play.

Climax Studios got another crack at Silent Hills after Origins received a lukewarm reception. The developers didn’t waste this opportunity, delivering the best entry to the franchise outside of Team Silent’s original three.

Shattered Memories is a reimagining of the first Silent Hill. Despite working with the limitations of the Wii, Climax managed to recapture the terror of that game while also freshening up what was becoming a stale and repetitive gameplay formula.

Once again following Harry Mason, players set out on the familiar quest of finding their missing daughter. That’s about all that remains the same, though, with Shattered Memories taking place in a disconnected universe. It came with an original plot, and alternate versions of Silent Hill characters all wrapped in one big terrifying bow.

Silent Hill: Shattered Memories was the next game in the series after Homecoming. Thankfully, Climax Studios ditched the combat-focused gameplay in favor of pure horror. To emphasize that, players don’t even have the option to fight; instead, being forced to run and hide.

This was already a recipe for success, but Climax Studios went the extra mile. The world around the player actively adjusts to choices that you make during psychologist visits interjected regularly into the story.

All together, Silent Hill: Shatter Memories is one cohesive package that helped the series achieve one last height before Downpour.

It should come as no surprise to see the original three Silent Hill games dominating the top of this list.

In third place, we have Silent Hill 3. While this was the entry that reached the technological peak in terms of gameplay, it also took a few too many creative liberties with the plot.

You play as Heather, a rebellious teen that is searching for her missing father (sound familiar?) However, rather than serving as a psychological examination of the human mind like the first two games, this entry focuses on the history of Silent Hill itself. This writing choice ultimately took away from the overall experience, but not enough to completely sour the game.

Questionable narrative choices aside, Silent Hill 3 is more than worthy of being in the conversation of the best Silent Hill games ever made. It brought a fresh amount of new content to the franchise, and retained enough familiarity for longtime fans to enjoy.

Spot one and two on this list were a toss-up. Either remaining game could justifiably occupy both positions, but we’ve decided to award Silent Hill 2 the silver medal.

This game perfected the style introduced in Silent Hill 1. It’s arguably the most recognized entry to the franchise for non-hardcore fans. It’s also one of the most renowned horror games ever made.

You follow James Sunderland. James is a man that arrives in Silent Hill after being prompted by a letter from his dead wife. This simple setup gives way to what many consider the best-written story to come out of the PS2 era. It also had graphical and gameplay upgrades to back that impressive narrative up.

Silent Hill 2 is the game that gave us Pyramid Head. Even if you’ve never played a Silent Hill title, chances are that you recognize this character. That’s just one example of how well-designed Silent Hill 2 was – especially in a time when gaming was truly starting to come into its own as an art form.

You could make an argument for Silent Hill 2 occupying the number one spot, and that argument would be valid. However, we feel that it’s only fitting to give the crown to the title that redefined video game horror as we know it.

Even with the technological limitations of the original PlayStation, Silent Hill 1 quickly became the gold standard in psychological horror. It’s used as a measuring stick for games to this day. Given the limitations of when it was released, that’s incredible.

While it hasn’t aged particularly well in the graphics or gameplay departmen, the terror that the title initially embodied is still alive and well.

Silent Hill 1 inspired what would become the most prolific horror game series of all time. It’s worthy of both earning a spot in the video game hall of fame, and the number one spot on our list.

The Future of Silent Hill

Some people believe that the Silent Hill franchise is dead and buried. Others believe that it’s only a matter of time before Konami, for better or worse, gives us a new title.

While there have been whispers and rumors of a return permeating the gaming industry for a while now, all we can do is sit on our hands and hope.

By Eoin Black
Follow:
Eoin has been playing video games his entire life. He specializes in narrative-driven, single-player titles, and brings his extensive Esports experience into his writing.
1 Comment