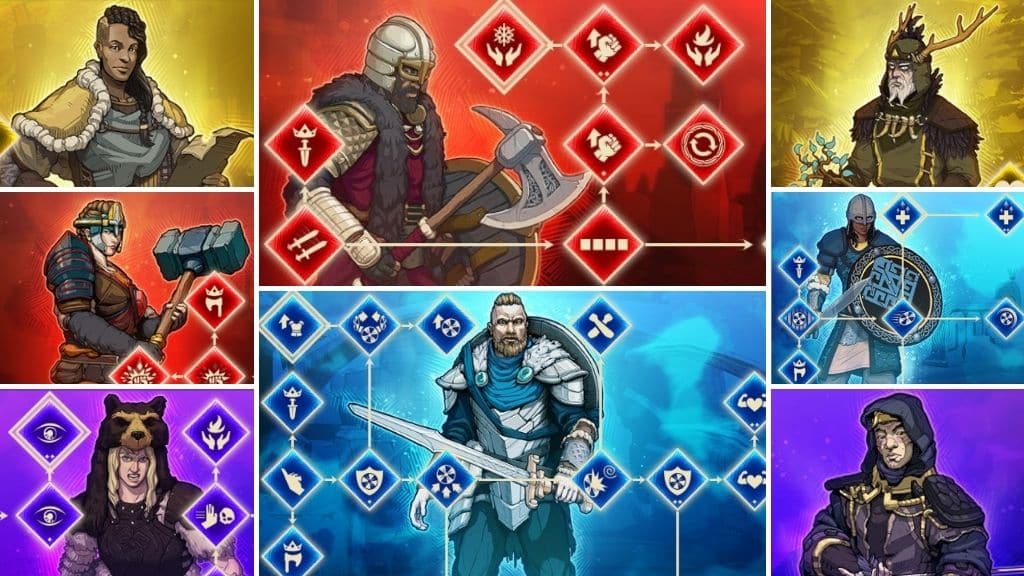 With Tribes of Midgard making a solid debut this year, a lot of players have been enjoying the grind so far. This RPG roguelite base defense hybrid is quite unique and the art style gives us a refreshing vibe. Some may even liken this game to Valheim and Diablo.

For those who are new to the roguelite genre, you’ll mostly get endless procedurally generated loops while getting perks on the next playthroughs to keep the replayability strong as well as making your progress a bit easier as time goes by.

If you’ve invested tons of hours into the game and unlocked all the classes but haven’t decided which one would probably suit you in the long run, we got you covered.

Here’s a rundown of our Tribes of Midgard class tier list as we uncover which viking would best fit you in your Saga journey in Valhalla.

Believe it or not, this is the most powerful class that you can master in Tribes of Midgard especially if you plan on doing solo runs for most of your playthroughs.

Untamed Ashes is an essential blessing to have if you’re playing as a warrior as it can give you the ability to self revive which other classes don’t usually offer.

Not to mention you can save your souls in the process while having this blessing because once you die you lose all of it. However, there is a rune that can save a percentage of your collected souls.

Aside from the self revive, you also have a lot of armor plus mana and combo buffs so this starting character breathes balance in both attack and defense. Don’t be surprised if you manage to reach over Day 10 in a single run alone.

The Guardian is the best tank and support class that you could ever have in your party. It has a lot of survivability buffs making it a great class alongside the Warrior for grinding solo.

If you’re starting out, this class can easily be unlocked while playing as a Warrior as long as you can beat at least three giants in your Saga grind.

The Guardian also helps you unlock the Sentinel class easier by taking advantage of its Defensive Pillar blessing which gives you blocking ability in all directions.

Defensive Pillar is pretty helpful if you’re surrounded by hordes of enemies while your teammates can clean up the threats. Another essential blessing to combine especially if you’re adventuring solo is the Laws of Attraction.

Laws of Attraction gives the Guardian the ability to draw in enemies himself while giving players the ability to hack freely. Not to mention the mana regeneration that it gets whenever he blocks attacks, giving him an overpowering advantage.

Guardians don’t have self revive abilities compared to the Warrior class but they have a blessing called the Last Stand wherein instead of getting knocked out right away, you’re given 1 health point which is useful while thinking of a strategy to escape adversaries.

The Seer serves as a decent base defender for solo grinding and great support in a team despite not having any weapon base attack and defense buffs.

However, they do give away elemental bonus attacks such as lightning, fire, and ice plus it also has the blessing of nullifying temperature effects through its Tempered blessing.

Its starting skill is already a great perk when it comes to survivability spawning seedlings that heal you in an area. Upgrade it further with Yggdrasil’s Roots and it even has a chance to root your enemies making them easier to kill.

It also has overpowered healing buffs that greatly help the team like revives only take a second and they also have a chance to be uninterrupted if you get the Safe Revive blessing.

If you’re new to the game and you quickly want to unlock the Seer, the fastest way to do it is to slay one Jotunn per run and escape the world via the Bifrost 10 times.

Arguably, both the Warden and Seer can interchange themselves in either the S or A tier on our Tribes of Midgard tier list depending on the players’ preference when it comes to grinding.

If you prefer a jack-of-all-trades kind of viking, then you may want to try out the Warden. The Waypoint as your first skill is already helpful because it makes traveling around the map much easier.

Although the Warden doesn’t have any defensive blessings, the Dwarven Made blessing helps you save a lot of souls because you won’t need to spend them on keeping your equipment durable.

The Warden also has the ability to build plenty of structures and the Haggler blessing will also save you tons of souls. So if you’re planning on speedrunning and surviving a longer Saga through feeding Yggdrasil with souls, this class is your best bet.

If you want your class unlocking grinds to be more efficient, what you can do is escape the world 9 times through Bifrost, and on your 10th Saga attempt, try to survive for 15 days.

Once you’ve managed to pull it off, escape the world and you should get both the Warden and Seer, which we’ve discussed earlier. The Bifrost is usually located near your village so it’s not that hard to spot.

This class is probably the most unique among the group since it’s the only tribe member that can provide passive healing to itself. So that’s already a lot of time and resources saved from crafting additional items in the early days of your Saga run.

Max out its level and you can get Focus Parry that can block and stun enemies who try to hit you. If you’re in a team, you can also take advantage of the No Mercy blessing giving you bonus damage to stunned enemies while your Guardian teammate initiates its Pain Release to create the stun effect.

If you feel like being Captain America, you’ll certainly have fun with throwing shields as a Sentinel. They also provide a good 20% armor support buff to other members of the tribe through its Shield Wall blessing.

To unlock this class, you would need to block 25 damage in 10 seconds and this can be simultaneously done together with the Berserker’s unlock requirement of killing 20 enemies.

Try using the Guardian class to easily accomplish this task since you can take advantage of its block skills and AoE attacks. Group enemies during the Blood Moon event or try to bait around 25 small creatures in the Land of Pools, Ash Beach, or any Hideout areas on the map.

The Berserker excels in high damage output but the blessing tree comes at a high risk as well. An expert at axes and hammers, this class doesn’t deliver much protection aside from its resistance to stuns and slows.

Also, if you’re planning to go with a hammer build, you won’t have any shields to aid you in blocking incoming attacks especially if you’re venturing solo.

Berserkers also provide weapon durability of up to 50% so you also get to save a couple of souls in the process compared to the Warrior which gives up to 50% armor durability.

Overall, this is a good companion to have when you’re in a team together with the Guardian or class. Unless you’re good with dodging and landing clean critical hits, you would most likely prefer the Warrior over the Berserker when doing solo runs.

The Ranger is one of the starting classes in the game together with the Warrior.

However, this class is a resource hog because their weapon set involves crafting specific arrows in certain situations. Although it has an infinite supply of default ammo, expect this class to be weak in the early days of your Saga run especially if you’re playing solo.

Players might also have a hard time playing this viking class solo because his current blessings tree doesn’t give much power but it gives a ton of mobility and DPS upgrades.

Ullr’s Step gives you the ability to step back while knocking back your enemies but mastering the ability might take time since it also doesn’t have a short cooldown.

The Ranger can probably go overpowered once you get its Deep Quiver blessing saving you on some resources to craft more arrows but currently, it only gives you a 50% chance of recovering your arrow shots.

Going for a melee build for this class is probably a bad idea since its blessings tree is more focused on bows. The only blessings that are helpful in this class are Slow Poke that gives a slow buff on melee attacks and Sword Mastery which only gives you a measly 10% boost on sword attacks.

If you’re planning to play as a Ranger, it’s better if you’re in a group so you can take advantage of its DPS abilities properly. And you can also keep your distance while the other fighters and tanks in the game do the frontline heavy lifting.

The Ranger class can probably upgrade itself to an A-grade from the Tribes of Midgard character tier list if the devs would somehow tweak Ullr’s Step cooldown to be slightly faster.

The Hunter class is currently the most underwhelming and weakest character that we’ve seen so far from all of the classes.

Most of its blessings focus on resource gathering and traps enhancement and honestly not a lot of players will have fun with this character. Two reasons are the perks are mostly for exploration and most of the time players would just focus on hacking and slashing enemies.

It would’ve been better at least if the Skaði’s Spirit blessing had a higher chance of deploying a decoy to compensate for these other low-grade blessings giving it at least a chance to be playable solo. Currently, Skaði’s Spirit only has a 40% chance to spawn a decoy.

Another downside of this class is it’s also the hardest to unlock because you would need to find all shrines in one Saga run. Given the huge map generated in Tribes of Midgard, it might take you tons of hours to complete this challenge if you’re gonna tackle this alone.

So if you want to try this class right away, then it’s better to find some friends to tag along in our Saga grind because one map has around 30 shrines.

If your hobby is resource gathering for your tribe, then this class might be valuable in a group as it can focus on keeping the base better.

We hope you enjoyed reading through this rundown of our Tribes of Midgard class tier list. Although most of us have different ratings for each class, the important thing is you find the character that resonates with you.

Which character stood out the most for you? Comment your thoughts below.