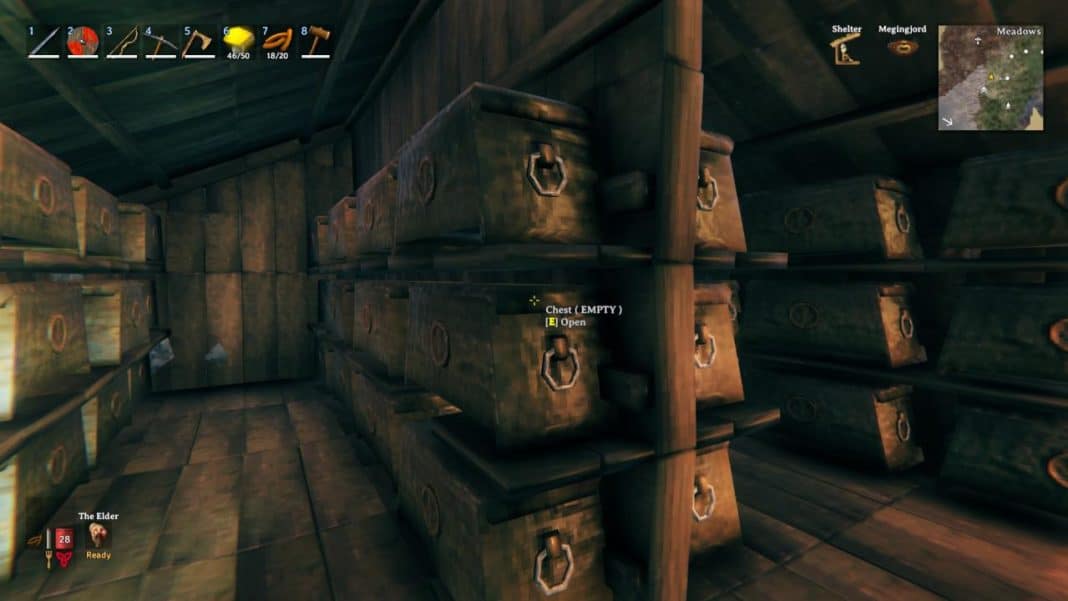 It’s still in early access, and that means there are tons of bugs and glitches that the devs are working hard to stamp out ahead of Valheim’s full release.

Some of the most grievous bugs in the game affect your personal chest. Many players are complaining about issues with opening their chests, disappearing chests, and items randomly going missing from their chests.

Why are My Chests and Items Disappearing?

Hundreds of Valheim players have taken to the game’s subreddit and official forums to air their complaints about the game’s many bugs affecting chests, among them: items disappearing from chests, chests becoming unopenable, chests vanishing, chests contents being rolled back several hours.

There isn’t yet an official fix for the chest bugs, but based on solutions reported by the community, the personal chest troubles appear to be related to the game’s network code and how Valheim stores saves.

Even slight disturbances in your network connection can cause notable desyncing; some players are even reporting world update delays upwards of 1 minute on private servers, often only affecting one player on the server. Additionally, problems with character save syncing have caused many players to lose hours of progress seemingly out of the blue.

Here are a few methods for avoiding save and desyncing issues on your server, as well as some ways to restore old data in the case of lost inventory.

If you own a MSI laptop, your personal chest issues may be linked to the Killer Network software that comes packaged with your device. Killer’s gaming software has a history of causing network issues for certain games, and Valheim is one of them.

To uninstall Killer Network, download the Killer Uninstaller from the official website. Simply follow the on-screen instructions to complete the uninstallation process. Then, restart your computer before jumping back into Valheim.

Steam Cloud periodically stores a backup of your world data onto their cloud servers; this has proven problematic, as the autosaves only occur once every 20 minutes or so, and syncing issues on your server can cause the game to overwrite your cloud save with incorrect data.

Luckily, the game also stores a version of your world data locally on your hard drive. This local save is updated first before being uploaded to Steam’s save cloud. However, when hopping into a save, Valheim will overwrite your local save with the latest version available on your cloud.

If your PC failed to sync your save to the Steam Cloud after your last session, the next time you hop into Valheim, it will load up the outdated Steam Cloud save rather than the one on your hard disk, potentially putting you back several hours.

The best solution for this is to disable Steam Cloud entirely. Here’s how:

That’s it! Your game will now only load from the latest world save file found on your hard disk.

There is one drawback to this solution: you won’t be able to continue your progress if you play on another device. Since the save data isn’t being uploaded to the Steam Cloud, if you log into your Steam account from another computer or laptop, you’ll have to restart your journey from scratch. But your character will still be waiting for you when you get back to your primary gaming device.

Valheim Save Shield is a software created by community member Razzmatazz that provides a solution for issues related to FTP sync issues in Valheim, such as missing chest items and unopenable chests. It works by changing how Valheim stores your world data.

Valheim Steam Shield (VSS) allows for multiple backups for a single world. Usually, the game only keeps one active save, periodically rewriting it as you progress in the game. This has proven problematic, especially for players with less reliable network connections — saves can fail to sync, corrupting your only cloud save. With VSS, instead of the same backup being rewritten repeatedly, VSS lets you set how many backups you want to keep before the game starts overwriting old saves. With VSS, you can have a save every 20 minutes going as far back as you want.

Anytime you run into a sync or spawning problem, VSS lets you restore your data to an older save.

Hopefully, the solutions provided here will let you get back to slaying monsters in Valheim without the fear of losing hours and hours of your hard work. Several players have reported a more stable and reliable experience in Valheim after trying one or more of these methods. Valheim’s developers have shown they’re committed to fixing these bugs and making the game as good as it can be before officially going gold, so keep your game updated with the latest patches!