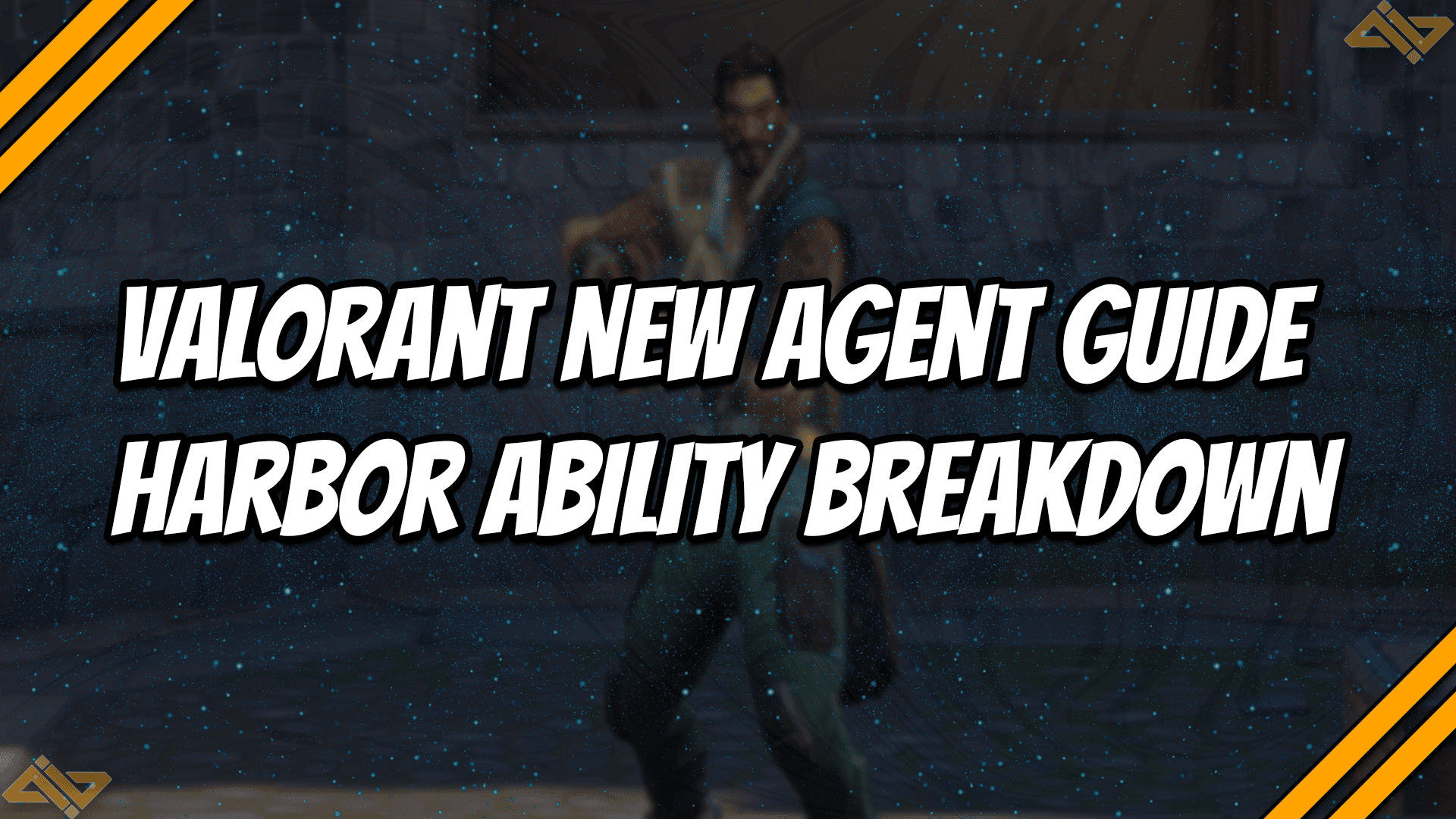 It’s that time of the month again. Valorant has once again released a new agent, and this time, it’s a Controller named Harbor. Harbor is a master of water, controlling the tides of battle using his ancient technology.

Riot usually releases new Valorant agents every few months. The last agent released before Harbor was Fade back on April 27, 2022, when Episode 4 Act 3 began. This is why it’s no surprise that they are once again releasing a new Valorant agent together with the start of Episode 5 Act 3.

Thanks to the various leaks and the official Harbor gameplay reveal, we now have a pretty good idea of Harbor’s different skills and how they work in Valorant. It’s definitely exciting to be a Valorant player when new agents are released.

Join us as we dive deep into the new Valorant agent’s abilities and how to properly use them in battle. Here’s our Valorant new agent guide for Harbor.

As we’ve mentioned, Harbor is Valorant’s newest Controller agent. We finally got a new Controller after months of waiting. The last Controller we got before Harbor was Astra. Astra was released on March 02, 2021, at the start of Episode 2 Act 2. This equates to roughly 19 months without a new Valorant Controller agent.

Luckily, Harbor is looking like he’s definitely worth the wait. It seems he will have some insane game and meta-changing abilities that will have Controller mains rejoicing. Though, it also looks like he has quite a learning curve and will probably not be one of the best Valorant agents for beginners.

If you’re as excited as I am, here is the new Valorant agent Harbor and his different abilities.

Harbor’s C ability is Cascade. This allows him to equip a wave of water and send it rolling forward. Cascade continues to move and can even go through walls. Harbor can re-use the ability to make the wall stop in its tracks. Every player who has been hit or passes through the wall are temporarily slowed.

Once you fire Cascade, it travels in a set path and cannot be changed aside from stopping it. The path can be viewed on the mini-map. Since Cascade can move through walls, it can be used from creative angles, which can help you push sites with ease. You can also use your mini-map to find where exactly your wave of water will end.

Cascade can be used in a variety of ways. You can use it to push through small or tight areas where enemies will have to choose between staying and getting slowed or retreating. You can also use it as an additional wall to cover certain areas around the map.

Cascade can also be used as a defensive tool, thanks to the slow that it applies to other players. You can deploy it near entrances and force enemies to wait for a while or push through and get slowed. It can sort of act as a better Sage slow, especially since enemies can’t see through it.

Harbor’s 2nd basic ability is called Cove. By default, Cove is mapped to the Q key, but you can change it through the Valorant settings menu. Cove allows Harbor to equip a sphere of shielding. You can either use fire to throw or alt-fire to underhand throw. Once it lands, it spawns a water orb that blocks bullets.

Cove is definitely one of Harbor’s most exciting abilities. It’s  also the ability that will have the community screaming, “Harbor is too OP!” It acts like a normal Controller smoke, but bullets can’t penetrate through it. This gives it a ton of flexibility, and I can already see the highlight plays and outplay clips from this ability alone.

One downside to this is that most of the time, you’ll end up saving your Cove for these situations rather than using them to get to the site.

Another great way to use Cove is to directly use it on top of enemies. Since it can block bullets, enemies will have to swing or peek out of it if they want to spam or shoot at you. This is very useful against op-ers and can help you gain control of a site.

Cost: Free at the round start with 40s cooldown
Charges: 1 Charge

His signature ability is High Tide. High Tide allows Harbor to equip a wall of water. Using fire will send the water forward along the ground. Holding fire will allow Harbor to guide the water toward the direction of your crosshair. Like Cascade, High Tide can go through walls, and enemies that are hit by the wave are slowed.

High Tide is what you get when you take Viper’s Toxic Screen and Phoenix’s Blaze and make them into one ability. High Tide will be Harbor’s pivotal ability that can change the tides in your favor, quite literally.

Riot has said before that they are looking to create multiple choices for different roles. This is why Fade’s Haunt ability is similar to Sova’s Recon Bolt. This is also probably the reason why Harbor’s High Tide is quite similar to Viper’s Toxic Screen.

High Tide is a great way to block huge areas on site and is going to make Harbor a great Viper alternative to large maps like Pearl, Breeze, and Fracture. Be sure to check our Breeze Valorant map guide if you need help winning on the map.

High Tide lasts around 15s and has a cooldown of 40s. This means that you can use the ability multiple times in one round, allowing you to recompose your team and plan another point of attack or defense.

Overall, High Tide is one of Harbor’s most powerful skills. It’s definitely going to be an annoying ability to deal with.

Finally, we have Harbor’s ultimate ability, Reckoning. When using Reckoning, you get to use your artifact to its fullest extent. You can use fire to summon a geyser pool on the ground. All enemy players in the area are targeted by consecutive geyser strikes that concuss all enemies hit.

Reckoning is a great intel-gathering ability that you can use to push out enemies from hiding or easily gain control of the site. The ability is similar to Fade’s Nightfall or Breach’s Rolling Thunder and is an ultimate fit for an Initiator’s skill set.

Enemies hit by Reckoning will also have a gold and purple plume above their heads, allowing everyone to see them, even if they are hiding behind walls or objects.

Reckoning is a powerful ultimate when used correctly. You can even combine it with other ultimates from agents like Breach or Brimstone and cause chaos all over the site.

Overall, Harbor provides some necessary vision-blocking skills to the game. He can prove to be a valuable addition to Valorant and can fulfill a hybrid Controller and Initiator role within the team.

It will be exciting to see all the creative plays the community makes once Harbor is released to the live servers. One thing is for certain, though, he will be one of the most-played Controllers throughout the first patch for Episode 5 Act 3.

Valorant’s new agent is none other than Harbor. The term “harbor” is an area on the coast where water vessels can find shelter. It’s quite similar to a dock and provides a safe place for water vessels to stay in.

Harbor’s real name is Varun Batra, and he is a human male from India. Varun Batra is a former task agent who worked for REALM. REALM is a Pan-Asian organization whose main job is to recover historical artifacts from black markets and return them to their rightful owners.

During one of his missions, Batra found himself alone in a room with the artifact, which suddenly began activating. The artifact was drawn to Batra, quickly leaped from its pedestal, and attached itself to his hands.

Ever since that day, Batra’s life would never be the same. His partner Greaves, who wanted the artifact for himself, reported to REALM and framed Batra, claiming that he intentionally stole the artifact.

Batra spent nearly two months hiding from REALM. This is where he was recruited into the VALORANT Protocol. He agreed to join the organization and became its 21st Valorant agent and was from then on called “Harbor.”

Like the harbors in real life, Batra provided shelter and protection to the ones that needed it the most through the use of his artifact. This is why most of his abilities either block vision to protect allies or literally shield them from incoming bullets.

Like every other new agent in Valorant, you’ll have to unlock their contract in order to start playing them. You can do this through one of two things. You can either buy the agent using Valorant Points or equip his contract and get it to tier 5 using XP.

Most players will definitely want to take the long route and unlock Harbor using XP. It can take a while, but weekly missions will definitely help. Plus, it’s free, and all you have to do is play the game.

Here are Harbor’s different tier levels and what you can unlock by reaching them:

It’s worth grinding out every agent’s contract because of all the free stuff that you can get. Once you reach tier 5, you unlock the agent themself, and once you reach tier 10, you even get a free Valorant weapon skin.

That’s everything about the new Valorant agent, Harbor. I know that we all can’t wait to start working on his contract and trying him out in-game. He officially gets released with Episode 5 Act 3 on October 18, 2022.