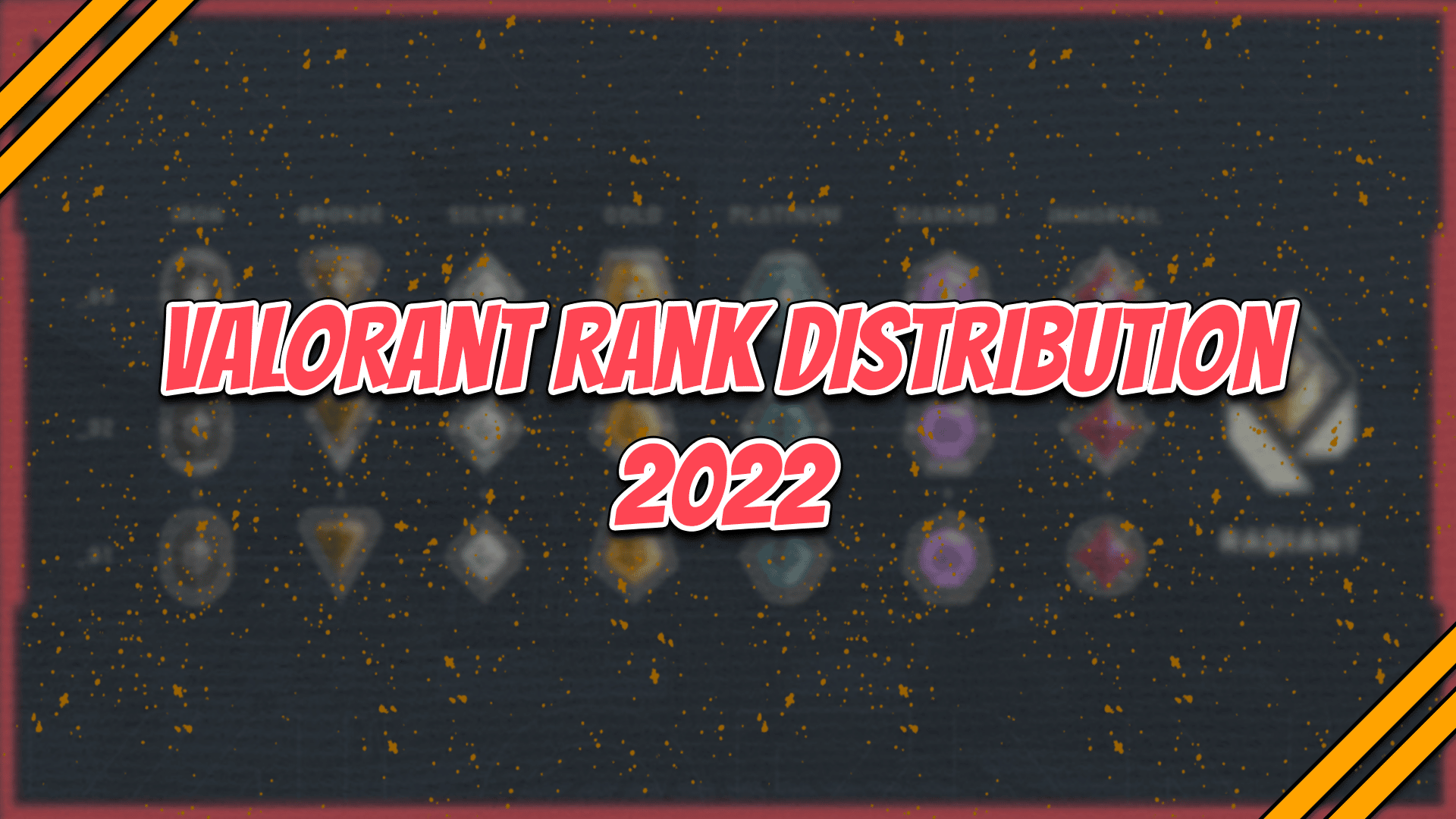 Valorant tries its best to create a competitive gaming environment where everyone is more or less matched with other gamers that have similar skill levels. This then creates the Valorant rank distribution that determines the overall state of the competitive system.

At the end of the day, the goal of Valorant and other games like it with a competitive online system is to create a healthy rank distribution system. They are slowly doing this through various tweaks and changes to the ranking system that’ll help improve things in the long run. So today, let’s take a look at the current state of the Valorant rank distribution.

Riot released the API for Valorant in December 2020. This means that developers and individuals can now use the API to find out specific sets of data that weren’t available to the public before.

This includes relevant data like everyone’s match history and ranks. This also helps the different Valorant stat trackers to provide more accurate and faster results. This is why were are now able to analyze and look at the data. Thanks, Riot!

As part of Riot’s attempts to create a more balanced and healthy Valorant rank distribution, they’ve introduced a new rank to the game. In Patch 5.0, Valorant updated the ranking system and added a new rank called “Ascendant.” Ascendant is placed between Diamond and Immortal and acts as the gateway to the higher ranks.

According to Riot, they did this to flatten out the Valorant rank distribution, especially in the lower ranks. They felt like a lot of players populated the lower ranks too much, and they couldn’t bump up the deserving players without overpopulating the Platinum and Diamond ranks.

For the Diamond players out there who were inches away from getting to Immortal, you don’t have to worry. Because of the new rank, everyone should be getting a slight boost in their ranks which helps even out the curve. If I were you, I’d definitely start using one of the best Valorant crosshairs to start your climbing journey.

With this move, the Valorant rank distribution is healthier than it ever was. It allowed Riot to move the deserving players up, freeing up the clogged-up divisions in the lower ranks.

Now that we’ve talked about the different methods that Riot is using to promote a healthy Valorant rank distribution, let’s talk about the specifics of the data and break down each rank:

The data that we used is provided by a website called Esport Tales. They’re a reliable source that releases monthly data regarding the Valorant rank distribution. The data they release are as accurate as you can get and also covers all the competitive games across all regions.

A slow rise towards the middle and a decline towards the end create a very healthy bell curve. This indicates that the current Valorant rank distribution is in an excellent state. You always want to see that the average skill set of your player base falls within the median ranks as well.

Here are the exact percentages for each Valorant rank as of November 2022.

Now that we can see the exact percentages, we can get a better grasp of the total number of players in each rank and tier. It shows a fairly balanced and stable Valorant rank distribution, mainly thanks to the addition of Ascendant and the lower rank adjustments that Riot made.

Unfortunately, we cannot provide you with the exact number of people within each rank since Riot doesn’t make these numbers publicly accessible. But, there are an estimated total of 22,140,789 average monthly Valorant players for November 2022.

We can then use the total average monthly Valorant players to get a rough estimate for the number of players within each rank. Simply multiply the total number of players by the percentage of each rank. Assuming all 22 million players are ranked, there should only be around 664,224 players in Radiant. Sheeesh.

Do remember, though, that it’s only a very rough estimate since not all 22 million players actively play ranked games. However, it does give you a pretty great perspective on how you fare against the other players within your skill range.

How Do Rank Distribution Resets Work in Valorant?

Of course, these statistics aren’t going to be accurate forever. Factors such as player loss, new players, meta shifts, and skill disparities, among many others. To prevent inconsistencies in the Valorant rank distribution, Riot does a rank reset at the end of every Act and Episode.

They implement these resets to determine whether each player actually deserves the rank they get. This also gives a refreshing start to players, especially those who are tilted and have had enough of the Valorant rank grind.

How Does A Valorant Act Reset Work?

Like the name suggests, Act rank resets occur at the end of every Valorant Act. They are generally considered as “soft resets” that are put into place to check which currently ranked players are still active.

During Act resets, the leaderboards are reset, and everyone in it drops to 10% of their current Rank Rating. This allows lower in the leaderboards or nearly at the leaderboards the chance to get a higher leaderboard ranking. It also makes sure that the top players in the world are constantly battling for positioning and that no one remains stagnant.

For those of us ranked Ascendant or below, we don’t have to worry about much. Our RR doesn’t drop at all, and we’re only required to play one game to get our previous rank. That placement game still applies the regular rewards or penalties that you get in normal Valorant ranked games. Your rank and RR get revealed and adjusted accordingly after playing one placement game.

The soft reset allows for lower-ranked players to continue putting in the hard work and grinding on Valorant for hours to get their dream rank. This also allows the leaderboards to remain a competitive environment where the world’s best players can battle it out.

An Act lasts for about two months. This gives players enough time to grind for their Act rank and get ready for the next Acts to come. This also allows enough time for specific metas to develop, agents to be adjusted, and new strategies to be formed.

The Act reset shouldn’t be much trouble for any active Valorant player, but it’s an important mechanic that keeps the Valorant rank distribution healthy and in check.

How Does A Valorant Episode Rank Reset Work?

During Episode rank resets, everyone gets a fresh start. It doesn’t matter if you’re Bronze, Plat, or Radiant. Your rank still resets to the default “Unranked” status. To get your starting rank for that Episode, you’ll have to play 5 placement games. The highest you can place, even if you were Radiant, is Diamond 1.

These placement games adjust your hidden MMR drastically. Although you won’t be jumping from Bronze to Diamond during these resets, they still play a big part in fixing your MMR. After playing the 5 placement games, you’ll typically end up around 1 to 4 ranks lower than what you ended the previous Episode with.

The Episode rank resets make for a fun and competitive environment that allows you to keep grinding at the game. It also helps lessen the amount of “boosted” players because their ranks get dropped closer to their actual values.

During this time, the Valorant rank distribution is going to be a little all over the place. This is because everyone is still getting their new shiny ranks. Some will be placed higher, some will be placed lower, and the grind still continues. However, this should balance out as the Episode progresses and as players get the ranks that match their actual skill level.

And that’s the end of our article. Hopefully, we were able to give you a great look at the current state of the Valorant rank distribution, and we were able to help you find out where you stand among other players.

Competitive can be a hard and challenging game mode to play. We all want to get the best rank we can before each Episode ends. It’s a representation of the hard work that we’ve put into Valorant, and of course, we get to brag about it to our friends.

So, where did you end up within the current Valorant rank distribution? Leave a comment down below.