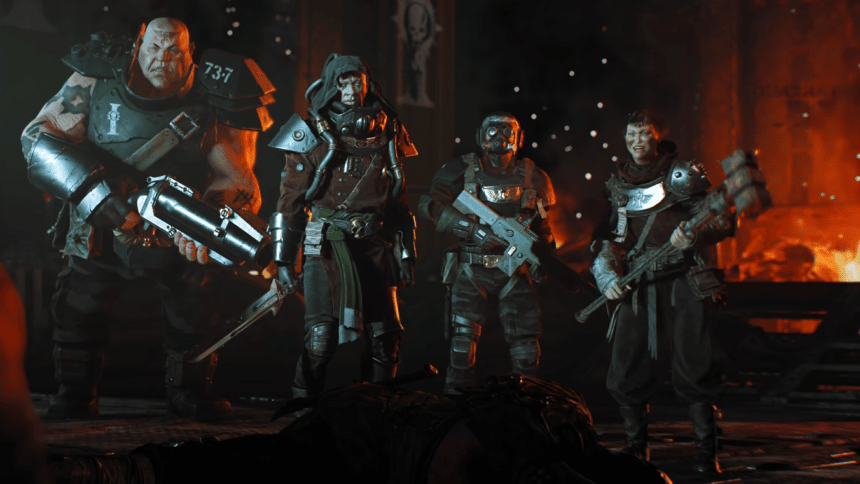 There are a total of four classes at launch in Warhammer 40K Darktide that you can choose from. Depending on your playstyle, you might prefer one class over the other. However, give all of them a try to see which one suits you best. With that said, let’s dive right in and take a look at the Warhammer 40K Darktide classes guide.

All Classes in Warhammer 40K Darktide

We have listed down all the advantages and disadvantages of each class so that you can know what they have to offer. Plus, we will also talk about what weapons and other abilities they have as well. If you are a new player, you might find all of the information overwhelming, but that is how usually Warhammer 40K games work.

There are certain classes that are ideal for beginners since they have a familiar playstyle whereas others might be a bit difficult. However, you should try all of them to see what your playstyle truly is. With that said, let’s get started with the Warhammer 40K Darktide classes guide.

Does not have a lot of HP

You need to have good aim to play him effectively

Starting off with the first class of the game, the Veteran. This is a beginner-friendly class that will seem easy and familiar to most new players. This character mostly focuses on ranged combat with their rifles and is ideal at landing headshots. Since you are attacking from a distance, you can stay safe and let the other members of your team tank the hordes.

Due to their high fire rate and precise aim, they are good against Elites & Specials. To make Veterans even better, they have an ability that increases weak spot damage at the cost of slower movement. Since you will be fighting from a distance, you don’t have to worry about the slow movement speed in most cases.

They also have a frag grenade in their inventory which allows them to eliminate enemies that are around the corner. Plus, it is also great against hordes since you can take out a good chunk of enemies with a well-thrown frag.

Difficult to take down

Not great at ranged combat

The grenade range is quite low

Zealots are one of my favorite characters due to their aggressive nature. They excel in melee combat and have a massive combat axe and autopistol to help them out in those situations. Since you will be engaging in melee combat a lot, you will take tons of damage too.

However, to more HP you lose, the more damage you will gain. This allows Zealots to gain an insane amount of damage that can be extremely beneficial against armored units. Plus, taking damage that will kill you instead makes you invulnerable for five seconds. The best part is that this passive only has a 90-second cooldown which goes by quickly.

If you are getting overwhelmed by the enemy, you can use your stun grenade to stun all enemies in its blast radius. This can help you either take down the enemy or get out of a sticky situation.

Has increased damage against elites

Can buff himself after using Brain Burst

Managing Warp Charges can be tricky

You cannot talk about all the classes without mentioning the mage of the group. Psykers use magic to deal damage to enemies and keep their team alive. They grant their allies a 10% damage boost against Elites which makes it easier to take them down.

Their psychic ability is one of the best in the game and it is extremely satisfying to look at. You can explode the heads of your enemies and generate a stackable Warp Charge. You can do this up to four times and each stack increases your damage by 3%.

Once you fully stack your Warp Charge, you will deal tons of damage and offer a lot of crowd control to your team as well. However, for a newer player, managing the Warp Charge can be a bit tricky since it runs out pretty quickly.

On top of that, you can easily knock back enemies that get too close for comfort. Thanks to your class ability, you will create a wave of Warp energy that will help you get out of trouble at the cost of your Peril level. Plus, Psykers are great at dealing with ranged enemies easily.

So, make use of your range and abilities and take out any enemy that might pose a threat to your team from a distance. With that said, though, you must play safely since your HP isn’t high and you can easily get eliminated.

Slow movement speed without your ability

Not ideal in large empty spaces without any cover

As you can see in the image, Ogryns are the heavy muscle of the group. They are tank characters that have a lot of HP and roam around with a strong shotgun. Ogryns are meant to go into the action and soak up all the damage for their team.

Unsurprisingly, they excel in melee combat as well if you don’t want to use their shotgun. Since they can take tons of damage before having to heal up or retreat, they are ideal against hordes. Thanks to one of the passives – Loyal Protector – you can revive allies even if you are taking damage from the enemy.

If you are feeling overwhelmed by the enemy, you can use your Bull Rush ability to charge at them and knock them back. This also gives you 25% more attack and movement speed which is quite useful. If you can get your hands on a shield, you won’t let any enemy reach your squishy allies.

Finally, they also grant their allies a 10% bonus damage to heavy melee attacks. This is quite useful since your allies can fight off enemies that get too close for comfort.

There you have it, that about does it for the Warhammer 40K Darktide classes guide. Hopefully, this guide assisted you in choosing an optimal class for yourself and enjoying the game. Make sure that you try out all the characters and see which one suits your playstyle the most.

Which class are you currently playing as? Is there a class that you like but have trouble playing? Let us know your thoughts in the comments below.