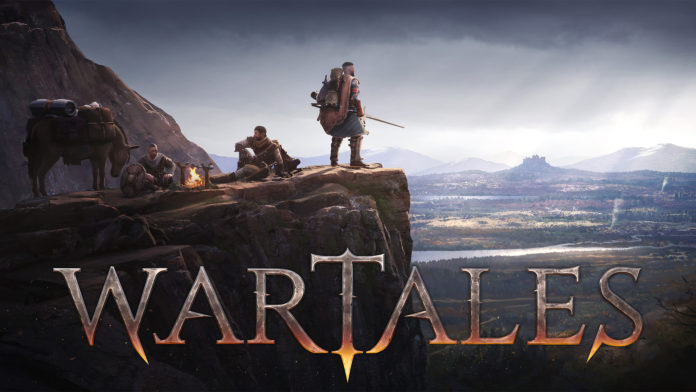 From the developers of Northgard, Wartales is a game released by Shiro Games and it’s a turn-based RPG with a mix of RTS exploration. Play as a group of mercenaries exploring the vast Celtic and Roman-inspired universe.

Head on to town, influence other mercenaries to join your party, do bounties from the innkeeper, buy or steal from merchants, claim rewards – rinse and repeat. The game’s atmosphere immediately felt like it was inspired by Mount & Warband or even Ni No Kuni.

So let’s take a deep dive into this mundane but exciting early access review of Wartales.

Wartales takes place a century after the Great Plague ravaged the world and there would remain struggling survivors. The cities still standing cautiously eye their neighbors, as roving raiders stalk travel routes in hopes of plundering valuables from unsuspecting travelers.

Honest work is difficult to come by in this age, but in such dark and dangerous times, hired blades are always in high demand. So this is where your mercenary lives begin.

At the start of the game, you’ll be treated to a starting number of companions and you have the option to create their origin story. Plus, you also have to assign one perk and flaw for the mercenary group.

Once you spawn in Tiltren County, you’ll be met with hoodlums and other sorts of threats. Wartales doesn’t really give you a formal tutorial in-game as it just lets you immerse immediately but the mechanics are pretty easy to pick up.

Later on, you get to unlock other regions through your explorations so when you start a new game, you won’t be limited to Tiltren County as a starting state, giving Wartales plenty of replayability.

From what we’ve noticed, every time you start a new game (in Tiltren County), there will always be a group of bandits ready to attack your party so you always have a turn-based refresher.

Become powerful warriors, rich nobles, well-known explorers, or even most wanted outlaws, the choice is yours! If you want a crazier challenge, go alone, but I doubt you’ll even survive an encounter.

Choose from the following paths to become the best band of mercenaries the world has ever seen. You can focus on one or do everything at once.

Being a criminal outlaw in the game also has its perks such as having access to a black market. The possibilities are endless on what you can do here.

Mix and Match Your Mercenaries

What I liked about Wartales is that the classes are pretty diverse and you’re not limited to using only one class.

From swordsmen to brutes, archers to rangers, you’ll never get bored of creating your perfect party. As your mercenaries level up, you get to unlock a couple of skills that will give you a greater advantage when fighting against hordes of enemies.

You can even assign them professions – some can be a tinkerer, an alchemist, a blacksmith, or even a thief. However, should you choose to switch to another profession, the experience you get from your previous job will reset.

For example, you have a Cook assigned to your party and you want him to go fishing. Once you change him into an Angler, he will lose all his progress as a Cook. The addition of minigames on some professions was also a nice touch.

According to the devs, you also have the chance to encounter unique companions with specific skills. However, if they die in battle, you might not be able to recruit them again in your playthrough.

Another interesting take in Wartales is that I like how the camp area feels like you’re playing Diablo – even the way that the inventory and each mercenary’s equipment are displayed, the aesthetic is there!

There’s no kingdom management but your mercenary camp can serve as one already. The camp also has its own workshop where you can craft items that kind of remind me of Valheim.

As your character progresses, the more skills you have at your disposal to creatively dominate your opponents. Once your character hits level 3, this is where the real fun begins as you’ll be able to equip stronger armor.

If you’re looking for top-notch voice dialogues like in Elder Scroll’s Online, then this game fails in that department. But we got to commend Wartales for creating an easy-to-learn but hard-to-master combat system and mercenary roster management.

Place your mercenaries like chess pieces at the beginning of the battle. Scan the battlefield for any spears lying around as this will become advantageous to your fights.

For the turn-based mechanic, the game uses a flexible grid movement instead of hexagons that you’ll see on other turn-based strategy games. They said in their latest community Q&A over at Steam:

“We wanted the player to feel free in their movements, without looking for pixel-perfect movement which is often tedious. We believe that by adding a flexible grid, we give the player the opportunity to express themselves while maintaining control.”

And we couldn’t agree more. Action points are gained if your party had a decent rest or if you fulfill certain steps to fill up your points depending on your selected mercenary’s passive skill.

Another nice touch that Wartales puts in their combat system is their Mortal Kombat like fatality cinematic once you deliver the final blow to your opponents. It’s not as bloody as MK but you get the idea.

This is where Wartales has its pain points especially when you’re starting out. It might take you a couple of playthroughs to get your mercenaries into shape to the point that you might just give this up.

There are plenty of things to worry about once you’ve set foot in Tiltren County: food and money for your mercenaries as well as happiness. The challenge here is making sure that you have enough food to feed your mercenaries and paying their wages once you set up camp.

Failure to pay their wages will result in making them unhappy and eventually, leaving your party. On the other hand, failing to feed your mercenaries will also lead them to their death. It might be a good idea to stock up some ale to keep your mercs happy.

The game’s over once you’re entire party leaves or has been wiped out by your enemies. So it’s best to do backup saves if ever you do something wrong in your encounters.

Some might get impatient with the resource management mechanics of Wartales but it gets easier the longer you immerse yourself in the game.

To save you the trouble of playing around with deciphering the resource mechanics, we whipped up these tips below to make things a bit easier on your first playthrough. Or just skip this part if you want to figure everything out on your own and head on straight to the verdict.

After all, the devs over at Shiro Games designed Wartales to be a blank canvass for you to paint on and it’s up to you to figure out what you want to do in this immersive RPG just like with any sandbox.

I’ve had almost five playthroughs just to figure out how to manage resources well and find the right mercenaries. Wartales personally gave me a challenge.

But fear not, we’ve gathered some beginner tips for you so you won’t have a hard time playing this game. As we said, Wartales doesn’t have a decent tutorial, so you would have to point and click your way through.

Here are some helpful tips for you to get started on Wartales and save you the headaches of constantly dying.

For the rest of the tips, we leave them to you, since we don’t want to spoil everything.

Plenty of Regions to Discover

Almost eight hours of playtime and I barely left Tilten County just because I felt like exploring every nook and cranny of this region. The map is pretty huge, I felt like the more I get hooked into this world, the more I wanted to know what regions are there for me to discover.

One obstacle that you would need to overcome is the need to generate a steady supply of Krowns. This is because if you want to cross the border to the next region, you will need to pay a one-time fee of 200 Krowns for safe passage to the other regions.

Meet traveling merchants and traders along the way and get some rare weapons, armor, and stock up on food supplies. If you want to choose the criminal path, you can even steal from them, as long as your party level can handle the carnage. Meet refugees, rescue people from outlaws, recruit from different inns, and more!

Wartales immediately pulls you through this mundane gameplay loop that would make you feel frustrated at first. Restarting a couple of times just to get the right combination of rosters and resources ain’t no joke.

At least the relaxing soundtrack made the suffering a bit bearable, still immersing you in the aftermath of the Great Plague. Once you’ve gotten the hang of taking care of your mercenaries, the grinding becomes easier.

The game’s economy can be so unforgiving if you don’t do it right. I almost gave up reviewing after a few attempts. But luckily, I was able to sustain an average of 300 to 400 Krowns, enough to pay my current mercs and still continue to explore the game.

For an early access title, Wartales is one of those gems that you would want to root for. This is probably a game for those who want to watch this for the long haul. The paths are surprisingly comprehensive that you want to achieve every title. Not sure that the current price is justifiable but then again, they did a great job with Northgard so

Some players might get bored because of the huge map size and the repetitive quests, but if you’re a medieval fan and you’re patient enough to uncover every area of this Roman/Celtic-inspired universe, then it might be worth your time.

As the team said in their community Q&A, the environments of Wartales are strongly inspired by Scotland and North England. It’s not Age of Empires, but this game makes you feel invested in your mercenaries that you want them to survive for the entire journey.

We hope you enjoyed this Wartales game review. Get this on Steam if you want to add this game to your growing library and support its early access course until it fully releases in 2022.

This game has a very long way to go, but we’re already enjoying it! Check out our other medieval-themed game reviews such as Lords and Villeins.

This review is based on the PC version of Wartales. The key was provided by Shiro Games

Alec Paduahttps://thetradingcomedy.com
Alec is a content writer who loves to write topics on gaming, tech and finance. A singer-songwriter going by the stage name "Alex Corner", he also does live streams and releases songs on Spotify. He's also a trader who documents his stock market and crypto journey through a blog called "The Trading Comedy". During his free time, you might catch him playing or streaming games over at Twitch, Facebook Gaming or YouTube with his persona "Oppa Lec".