Where to Find the Gumquack Hollow Ultimate Weapons in Biomutant 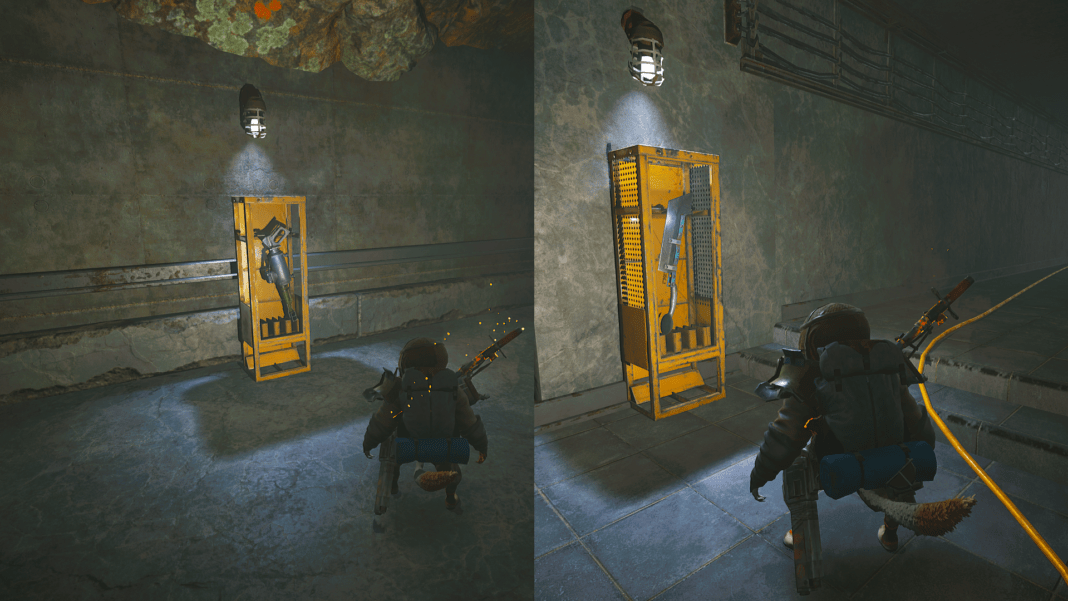 Ultimate Weapons are among some of the best weapons you can find within the world. Some of these weapons are easy to get, while some require a bit more effort.

There are quite a few Ultimate Ranged Weapons and Ultimate Melee Weapons that you can find as you progress through the main quest. Both the Sprinkler Smicksharper and the Bulletspinno Pjupejector belong to that group.

The first thing you’ll have to do is find Goop in the Surfipelago. He is located in the Subnautica Station, just a small way to the right of the Chugyard. Once there, all you have to do is talk to him, and he will give you a salvaging quest.

He’ll ask you to salvage parts for the Googlide that he will give you later on. Finding the parts should be relatively easy. You’ll have to solve a valve puzzle and a new kind of circuitboard puzzle.

You’ll meet a few enemies along the way. A notable one is the Huggel which uses his tail to attack and rolls into a ball to attack you. After the fight, head through the two metal doors where you’ll find another group of enemies.

There’s going to be a turret, two scavenger enemies, and a Guerilla Miniboss in this area. Fighting the other enemies while the turret is still active is going to be hard. The play here is to first take down the turret.

Once the irritating turret is gone, I suggest dealing with the two scavengers first before fighting the Guerilla Miniboss. He’s pretty slow, so taking him down shouldn’t be much of a challenge. Just watch out for when he tosses a large piece of the ground at you.

After the fight, salvage the Wrekbox and get back to Goop.

At this point, Goop will already give you access to the Googlide that you can use to traverse bodies of water. He’ll also ask you to capture five Gumquacks to use against the Porky Puff.

Gumquacks can be found within Gumquack Hollow. To know the location of Gumquack Hollow, you’ll have to ask a guy named Gulp. Gulp is a big furry character drinking in the middle of the Surfipelago, around 450m away from Goop’s location.

After talking to Gulp and listening to him rambling about drinks, he’ll tell you the location of Gumquack Hollow. Once at the cave, you’ll have to use your Googlide to remove the debris blocking the entrance.

Where to Find the Ultimate Weapons in Gumquack Hollow

Go inside the cave, shoot the tentacles, and head up the ladder. You’ll be greeted with another puzzle. This should be a new type of puzzle and requires you to connect the cables to other ports to match the number of X’s on the bottom part of the puzzle.

After solving the puzzle, the fan should stop spinning, and you can go through it now. You can then use your Old World Klonkfist to break the wall to your right. All you have to do here is drop down into the water.

A Huggle should spawn here once again. Just defeat him again, and then you are free to catch five Gumquacks. You should also see a locker here, but you can’t open it if you haven’t captured five Gumquacks yet.

This locker contains the Ultimate Ranged Weapon, the Bulletspinno Pjupejector. After obtaining the weapon, head straight into the tunnel, where you should be able to find another Wrekbox.

Head up the stairs, and you should be greeted with another set of metal double doors. Simply open the doors, head straight, and you will find another locker. This locker now contains the Sprinkler Smicksharper, an Ultimate Melee Weapon.

At this point, all you’ll have to do is solve another puzzle to activate the door and head back to Goop and give him the five Gumquacks.

Now you know where exactly to find the Ultimate Weapons in Gumquack Hollow in Biomutant.