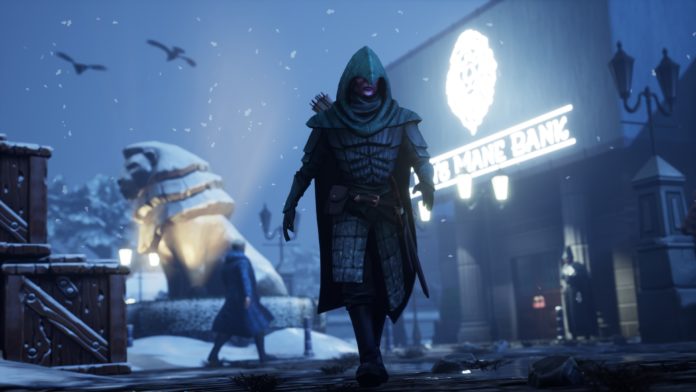 Winter Ember is an isometric stealth game that follows the story of Arthur Artorias as he returns from the “dead” to find out what happened to his family. Fortune, fame, identity – his goal is to redeem what is lost. Let’s take a deep dive into the gameplay and story of this Winter Ember review.

One of the strengths of this Winter Ember review is its story. A lengthy prologue cutscene provides a glimpse of what happened before Arthur turns into the “Faceless Man”. He is the only survivor of the Artorias family.

The Artorias family massacre left no one alive. But all thanks to Vesna, a mysterious girl Arthur met, he survived.

Years go by, and Arthur is finally ready to investigate his family’s murder. The cutscene catches attention immediately. It is well-written and very interesting.

The studio executed the art style really well too. It reminded me of the Dota 2: Dragon’s Blood animation from Netflix.

Moving on to the main story, it is linear, yet it remained interesting. With every mission, you unravel more of what happened years ago.

There are tons of surprises in the game, which kept me playing. It slaps back with a twist whenever the story flows into a usual plotline.

Moreover, there are side quests scattered throughout the map. It is not as abundant as other adventure games, but it’s better than nothing. Besides, it provides a much-needed break from the heavy storyline.

The story is not perfect though. There are mind-boggling parts that do not make sense at all. But it is fiction so it is not too bothersome.

If you haven’t heard of it, do check out the Winter Ember graphic novel if you want to check the story without playing the game.

The introduction to Winter Ember is long. It starts with the basics, such as moving and fighting, but it took a while before the crafting and skill upgrades arrived. I was an hour into the game when I arrived at that point.

Navigating the city of Anargal is a little bit like an open world. However, there are not many interactions you can do in the town. Only the essential interactions are allowed, and it felt like it could have been better in this aspect. This would have increased the overall immersion in the game.

The game’s focus is stealth, so dark areas are your friends. The stealth aspect of the game is most challenging, and sometimes I got frustrated that I just go right to the enemies and engage them in a fight.

The combat is alright. Once you get the hang of the timing, you are good to go. Just don’t engage the enemies in a group, as they will surely tear you to pieces.

Fighting is not just pressing the key to inflict damage. You also need to think of ways to deal more damage, such as parrying or using the surroundings.

There are boss fights too. It is not as hard as Cup Head but enough to keep you thinking of different strategies to fight. Should you run and strategize, or should you fight head-on?

There is crafting in the game, but it is exclusive to the arrows. These arrows can be combined with an element that you can use to either defeat an enemy or explore new areas. I find the arrows more usable when engaging with the environment. As for fighting, the usual swordfight is better.

The skill tree is excellent too. Skill tokens are scattered all throughout the map, and there are no clues to their locations. You just have to think of which ones you need to upgrade as the skill tokens are scarce. They do not drop when you defeat enemies.

It will take you a while before you can max out the skills you need. This, I think, is a good thing as you need to prioritize which skills are you going to upgrade depending on your play style.

It is easy to travel the map. There are two fast travel options – through horse carriage or using the sewers.

The horse carriage charges money depending on the distance of fast travel. Meanwhile, manholes are scattered throughout the map, and you can travel from one manhole to another without a fee. The only pre-requisite is the pry bar, and you have to unlock a manhole before you can travel freely.

As a stealth game, Winter Ember did it right with the lockpicking and pickpocketing. The medium-level lockpicking feels easy still and most of the time I get it in two tries.

However, the hard mode lockpicking is really challenging. The timer is sensitive and at the same time, the clunky controls make it more difficult. Sometimes it felt like there was a delay in the key presses too.

Gameplay: things to improve on

Let’s move on to the gameplay problems. The developers scattered the crafting materials throughout the map and it can be a problem.

For instance, I had to redo the whole game. Why? Because I used the last piece of an elemental arrow that I have.

I could craft it again, but I was not able to because there were no materials to be found. I traveled the whole South Anargal, tried to do side quests, and yet I am rewarded with nothing.

Another problem is object interaction. You have to be in a particular position to interact with objects.

“Oh, you have a crate to your right to jump to?” You have to move to the other side so the interaction button will pop up.

There are times when I am literally behind an enemy, yet I cannot perform a stealth kill. Instead, I had to face them upfront, defeating the “stealth” part of the game.

It got frustrating at times because it felt like I was one pixel away from where the interaction would trigger, yet it did not.

Playing Winter Ember on PC is best because of its controls. It needs the precise movement that mouse-and-keyboard (MnK) can provide.

I tried playing it with my controller, but the interaction button and precise positioning are better achieved with MnK.

For example, aiming with the bow is easier with the mouse compared to a controller.

Fighting is better on a controller, though. I felt like I had a higher chance of parrying an attack compared to when I was using my mouse.

So what else is lacking? Probably other movement options such as wall climbing or even jumping from one platform to another.

See, there are places in the game where a crate is beside a ladder yet, it is not possible to jump from the crate to the ladder. There are small walls too that an assassin can easily ascend to but it is not possible.

Overall, the controls are smooth, and it is easy to understand. There are key bind reminders on-screen, so it is not easy to forget. More movement options could have made the game better.

I would like to note that I played the game on PC with the highest possible settings at 144Hz 1080p.

Winter Ember looks great with its 3D isometric view. The environment is great, and the colors are excellent. The mood is perfect with what the story is trying to portray.

Character design is on-point too. The hooded-figure protagonist is reminiscent of Assassin’s Creed, but of course, Arthur has his own flair too.

The NPCs are not bad as their clothing match the intended setting.

On the other hand, the villains look great too. Of course, they look like copy-pasted soldiers, but they are not irritating to look at, except when they detect you while crouching.

The infected look great too but I hate how it blocks the view when they spit venom. It adds to the immersion though and I am still okay with it.

Did I say the cut scenes are stunning earlier?

A gorgeous cut scene introduces one chapter after another. Anime fans will surely appreciate the art style here. If you are not, then maybe this will be the start.

Despite the dark setting of Winter Ember, it does not look dull at all. The contrast between the lamps and the blueish shade of the night is very appealing. The cold winter of Anagral is felt visually through the snowy cityscape.

Winter Ember pairs the stunning visuals with excellent audio. The ambient sound makes it more immersive for someone like me who’s not into stealth games. It made me feel like someone was out there going to catch me anytime.

Fighting, walking, running, and other actions are accompanied by superb audio.

Moreover, unlike most indie games, significant characters are voiced.

Now there is a downside to the audio, but a very minor one. NPCs mutter the same voice lines all throughout, so if you pass by a lot of NPCs, expect the same sentences.

All in all, Winter Ember nailed it in the sound department. It is immersive and has no audio issues at all.

Winter Ember is an interesting stealth isometric game that is poised to bring the genre back to the mainstream. It has been a while since Splinter Cell made waves in the gaming industry. Now, Blowfish Studios ticked the right spot.

This game is like a full-course meal that gives different layers of flavor to every bite. In this case, every arc and side-quests are appetizers and the main quest is the highlight. When combined, it all leads to a fulfilling experience in the end.

The main story, in particular, is not the typical revenge story. It is much more than that.

Winter Ember is a challenging stealth game that will easily eat hours of your time. If you love the genre, then go for it. If you are not a fan of stealth games, then you should still try it. It is not perfect, but it is fun and that is what matters.

Not everything is worth praising though in this Winter Ember review. The sub-par interaction and clunky controls pull down the experience by little. Yet, it does not take away from the game’s potential to be great.

Winter Ember is a great isometric stealth game that provides a new take on the genre. It has a unique story that gets you hooked. Action sequences are excellent but walking through darkness and evading enemies makes it shine the most. There are hiccups with its controls and interaction, yet it ticks the right boxes for hours of fun playtime.

This review is based on the PC version of Winter Ember. The key was provided by Blowfish Studios.

Load more
Winter Ember Review: A Stealth Game Worth PlayingWinter Ember is an isometric stealth game that provides a new take to the genre. It has a unique story that gets you hooked. Action sequences are excellent but walking through darkness and evading enemies make it shine the most. There are hiccups with its controls and interaction, yet it ticks the right boxes for hours of fun playtime.
Tech