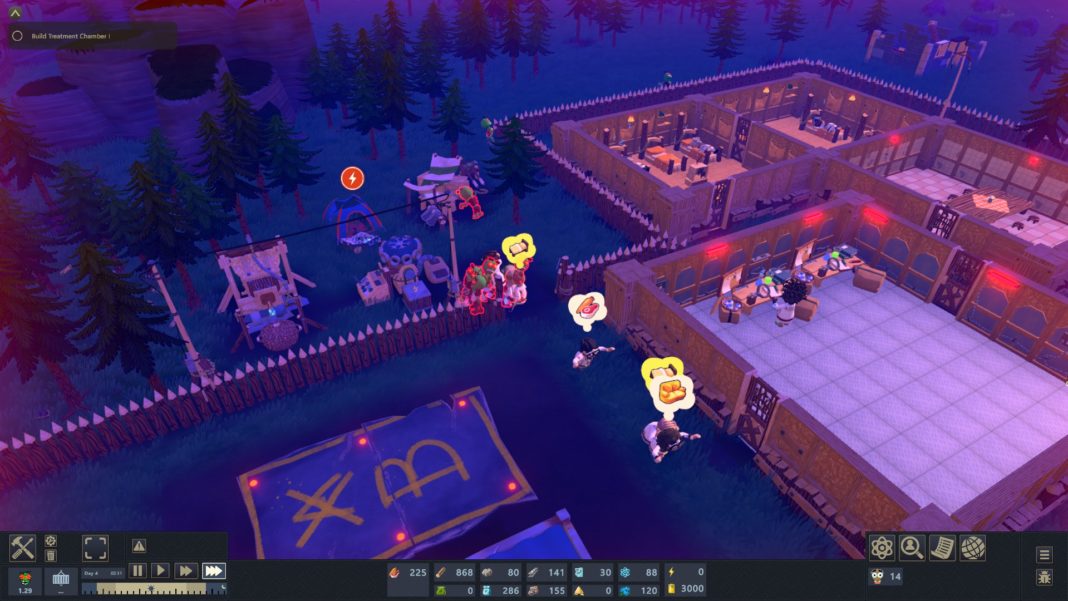 Zombie Cure Lab is a sandbox lab management game brought to you by Thera Bytes and Aerosoft. Play as a team of researchers where you quickly build an efficient research and curing facility before the zombies try to eat you alive.

Let’s have a look at the game and give our first impressions of Zombie Cure Lab where we tackle every aspect of its current build and what the devs can do to turn this game into one of the best management simulators to date.

What is the goal of the game?

Healing zombies is the goal, but you need to catch these zombies first with your fancy freezing guns. Escort your well-preserved ice block zombies to the treatment chamber.

Here the zombie-human hybrids – the “humbies” emerge as your new friends willing to help you out. Players need to be careful because if a humbie is in a bad mood, they might be erratic or even start rampaging through your lab.

Keep them happy at all times, cure more to increase your workforce, and try your best to “unzombie” the world. The game’s over once every person in your research team turns into zombies and you’ll be tempted to restart your playthrough.

Zombie Cure Lab’s graphics actually reminded me of Two Point Hospital because of the eccentric and comedic elements that I felt while playing the game. The zombie treatment process gave away similar vibes of Two Point’s comedic tone when it comes to treating patients.

Another aspect that I observed is the construction implementation of how the characters build their facilities, which in its current state, felt a bit rushed to me. Its animation is not as detailed compared to other city-builders but it doesn’t really break immersion.

The sound effects are decent, although I wish they added the background music in this build earlier that they provided so I wouldn’t get bored after a few hours (read until the end for the roadmap).

Constructing buildings is a breeze in Zombie Cure Lab. It’s very engaging to plan your imaginary blueprints for your facilities. The build options are also well organized.

For example, if you’re thinking of building a bedroom for your researchers, there’s a section where you can find all the structures that you’ll need to create a bedroom.

What I liked about the designing portion is that the walls automatically match the vibe of what kind of room you’re picking. If you’re building a research room, observe that the interior walls have their own theme making them distinguishable from other rooms.

I highly recommend playing the tutorial first before deciding things on your own especially if you’re new to this genre. It’s pretty easy to follow. You get introduced to gathering resources first until you’re tasked to build each room. Don’t worry, it’s not as overwhelming as compared to other management sims.

Scheduling assignments for each individual somewhat remind us of similar titles such as Going Medieval and Rimworld.

However, I had issues while scheduling some workers. For example, I can’t utilize someone properly if I want them to work two shifts. Most of the time, they would stay idle once their day or night shift ended. They wouldn’t even think of sleeping.

People in their idle time should be expected to unwind through the facilities provided. Also, I noticed some humans don’t stop working at all, even if I move around the facilities to somewhat remedy the bug.

Uncover Ways To Improve Your Facilities

In terms of technologies, Zombie Cure Lab has a plethora of research to work on while getting yourself challenged with fending off zombies every night. If you want to generate research points faster, you can assign shifting schedules with your human scientists.

Zombie Cure Lab plays around with this loop of setting up your base defenses before the zombies appear at night through walls and freezing projectiles.

During the day, you have the option to treat the frozen zombies transforming them into humbies. Later on, you can either assign them as part of your workforce or send them off to the MOOSE. Lab Headquarters to unlock the Antidote research from the game’s tech tree.

To be honest, if I hadn’t asked the Discord community about how to progress in the treatment tech tree, I wouldn’t have discovered that you can trade supplies with the MOOSE Lab.

I thought the reason why I couldn’t progress in my playthrough was because of the visual bug that I saw in the Antidote selection.

With that said, don’t forget to look at your world map every day. Obtain supplies from the MOOSE Lab and send away humbies that you’ve cured in exchange for Antidote Molecules or Research Points. You can also request resources and even scientists.

Unlocking antidotes in the tech trees can give you more access to Treatment Rooms giving you the chance of improving your zombie treatments and later on, transforming them back into humans.

After playing the tutorial and going with the standard game, I noticed that the Level 1 Snow Cannon isn’t really as powerful as I thought it would be. So I went back to building the Snow Shooter which was recommended by the tutorial in the early days of the playthrough.

The degree of difficulty scales the longer time passes in Zombie Cure Lab. So you really need to plan ahead if you want to survive longer. This last screenshot that I’ve shared above was actually another bug where this almost frozen zombie was teleporting in the area to the point that it surprisingly got into the facility.

Bugs aside, I’ve enjoyed my time with this build of Zombie Cure Lab. The cartoonish character models and the ease of building are pretty good so far.

You can check out their roadmap here if you want to know more about what’s in store for this year.

I can’t wait for the devs to fix the worker AI. This game is definitely on my radar and I might get back to playing this on my streams if my time permits. Pick it up over at Steam if you want to support this game’s development.

This first impressions review is based on the PC version of Zombie Cure Lab. The key was provided by Thera Bytes/Aerosoft.

Best Mouse for Drag Clicking in 2022