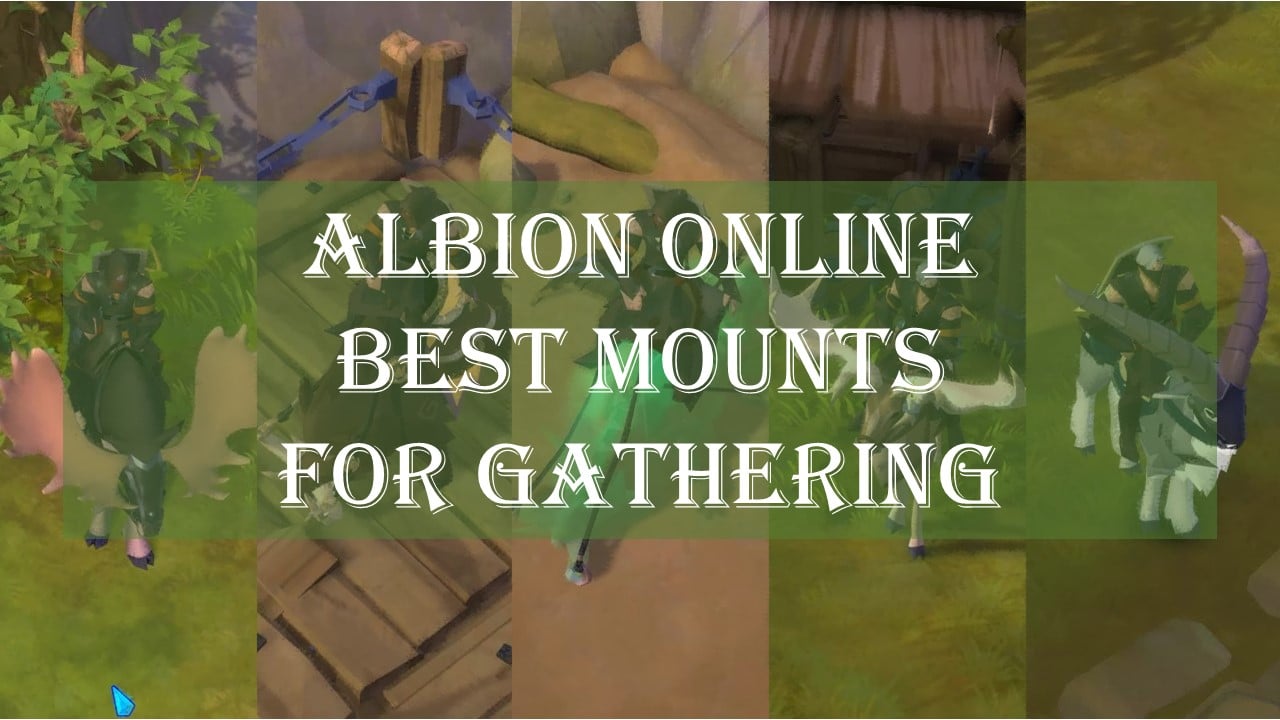 Resources are the foundation of Albion Online’s whole economy, and gatherers are the lifeline of this ecosystem—which is why many players choose the gatherer’s path.

But being a gatherer isn’t a walk in the park. It can be a risky profession, especially for those searching for better rewards. As a gatherer, you’re one of the main targets of gankers. And more often than not, you won’t be able to fight back when you’re caught.

Hence, if you want to be a gatherer, you should be prepared and equipped with the best builds and best mounts for gathering.

In this article, we’ll help you choose the best mounts for gathering in Albion Online.

What Makes a Mount Good for Gathering?

When looking for a good gathering mount, the max load (carry weight) bonus is important. Resources are generally heavy, and high-tier ones take significant amounts of weight.

If you don’t have sufficient max load capacity, you’ll get an overweight move speed debuff—which will make you a slow and juicy target for gankers. And if you don’t want to get an overweight debuff, then you’ll be forced to go back and bank your resources more frequently.

Neither of these two situations is good nor efficient, and you’ll be cutting a lot of your potential profits as a result. Hence, having a sufficient max load capacity allows you to optimize your gathering sessions.

Similar to ganking, gathering also requires having a decently fast mount. We argue that it’s even more important for gathering since you’re the one who’s trying to run away and have to outspeed the gankers.

Another thing to note here is the gallop buff delay. Although this isn’t as significant as the move speed bonuses, it can still prove helpful in specific situations.

For example, the Giant Stag and Moose have a gallop buff delay of 2 seconds, which is shorter compared to 5 seconds for Swiftclaw and 3 seconds for Riding Horse. This means that if you get hit while on a Moose, you’ll gain back your mount’s gallop move speed bonus more quickly than while on a Riding Horse.

However, situations, where two to three seconds of difference in gallop buff delay will save you, are very rare. You’ll simply gallop away from your gankers or not—being able to gallop two to three seconds more quickly will rarely save you when you’re being chased by a full ganking squad.

Aside from move speed bonuses, another important factor for a gathering mount is its tankiness. If you can’t outrun your gankers, you should at least be able to outlive them (still preferable if you can do both!).

If your mount has high HP and resistances, it may be able to survive ganks long enough to give you time to escape to the nearest exit.

A tanky mount can also usually survive the initial onslaught of gankers, preventing them from dismounting you. Or, if they manage to do so, at least you’ll have a higher chance of reaching the exit since they’ll take a bit more time before they kill your mount.

Lastly, another factor when choosing the best mount for gathering is the market price. Let’s face it, you will definitely die at some point (unless you don’t leave the safe zones). The veterans and most experienced gatherers in this game have died multiple times throughout their careers, and every death is always a good learning experience.

But dying is fine as long as you know how to bounce back. If you’re going to be a gatherer, you should always pick a mount that best fits your budget.

Certain mounts are better in terms of their “benefits-to-price” ratio. Some gathering mounts are cheap but also slow and easily killable. Meanwhile, some mounts are tanky and fast but cost a considerable amount.

But some mounts have a good balance of both. These mounts aren’t too expensive, yet they offer good benefits for gathering.

A balanced combination of all these factors makes an excellent mount for gathering. If you want to know what the best gathering mounts are, then read on.

Tier 6 Moose is perhaps the best mount for gathering you can find in Albion Online. Almost everything about the Moose fits our criteria well, and it’s by far the most cost-efficient mount in the game.

This mount has a max load bonus of at least 374 kg. It might not seem much compared to the boar mounts, but it’s often enough for a decent gathering session. Just couple it up with a high-tier bag, and you’ll have enough max load capacity to gather a substantial amount of resources.

Moreover, Moose’s excellent move speed bonuses are the top when it comes to gathering mounts. The only other mount that can match its move speed bonuses is the Frost Ram (which we’ll talk about later). Its gallop move speed bonus of 120% is on par with the Swifclaw’s, so you have a high chance of escaping gankers with this mount.

Of course, if your gankers are using Direwolves, then they’ll eventually be able to outrun you, but Moose’s speed is the best chance you got for a gathering mount. Besides, almost nothing else can outrun a Direwolf anyway as it’s one of the best ganking mounts in the game.

The Moose’s HP at 1075 isn’t amazing, but it’s not horrible by any means. And although this mount isn’t as tanky as we would like it to be, its amazing move speed bonuses more than make up for it.

Lastly, the average market price for the Moose is around 400k to 435k silver, which is within the budget of most players (even the relatively newer ones). Other mounts are definitely cheaper, but the advantages of the Moose make it very well worth the silver.

In terms of carrying weight capacity, the Saddled Wild Boar is superior to the Moose. Its max load bonus of at least 781 kg is more than double the Moose’s, which means more resources for you to carry in one go. This allows you to have longer gathering sessions for better efficiency.

Unfortunately, the Saddled Wild Boar falls short when it comes to speed. It only has a gallop move speed bonus of 110%, which makes it an easy target to catch for gankers in fast mounts.

The Saddled Wild Boar is far from being the fastest mount, but its survivability rests on its decent HP and good resistances. Its HP is just slightly more than the Moose’s at 1098, but it has added beefiness thanks to its bonus armor, magical resistance, and CC resistance.

The bonus armor and magical resistance let your mount absorb more damage before dying, and the CC resistance helps you survive multiple crowd control effects from gankers. The bonuses’ values aren’t that high on their own, but they’re surely helpful especially when stacked together with your gears’ resistance bonuses.

A Saddled Wild Boar is typically sold for around 330k to 380k silver, which is close to the price of the Moose. It’s relatively cheaper but also tankier with a better max load bonus, making it on par with the Moose as one of the best mounts for gathering.

The Spectral Direboar is very similar to the Saddled Wild Boar. It’s practically a more expensive version of the latter, but it also has some perks that make it an excellent mount for gathering.

The best things about the Spectral Direboar are its max load bonus and mount ability. Its max load bonus is 1203 kg, which is around 33% higher than the Saddled Wild Boar’s. That’s A LOT of resources!

Moreover, this mount also has the ability Glimpse of the Other Side. Using this ability makes you invisible for five seconds, which can give you enough time to juke gankers. Beware, however, as using this ability removes your gallop move speed buff.

The main downside of the Spectral Direboar is that it’s actually expensive. It typically costs around 700k to 730k silver when it’s not available for the month (since it’s one of the Adventurer’s Challenge mounts), and it only slightly gets cheaper during its designated months, which is every July.

The combination of extremely high max load bonus, overall tankiness, and juking ability make the Spectral Direboar not only a good mount for gathering but an exceptional mount for transporting as well.

The Giant Stag is practically the cheaper version of the Moose—and a noticeably weaker mount. It has a below-average HP and mediocre gallop move speed bonus. It is worse than the Moose in every way, except for their price—and understandably so.

The good things about the Giant Stag are its great base move speed bonus and decent max load buff. But none of these are enough to compensate for this mount’s frailty and subpar gallop speed bonus.

However, the main selling point of the Giant Stag is its cheapness. You can buy one from the market for only around 60k to 65k silver. This means you can buy at least around six Giant Stags for the price of one Moose! This is why it’s actually a good mount for gathering, especially for beginners who have very limited silver.

Be wary, though, as the Giant Stag’s frailty makes it an easy target for gankers. Its low HP, lack of resistances, and low gallop move speed bonus mean that you have to be extra careful when traversing the red and black zones(or you could just switch to a better mount!). Once you get caught by the initial CC or damage of a gank group, you’re most likely going to die if there’s no exit nearby.

None of its stats is amazing, but the Giant Stag’s low price and decent max load bonus make it a viable option for a cheap gathering mount—and deserving of a spot on this list.

Finally, we have on this list another Adventurer’s Challenge mount, the Frost Ram. The use of Frost Ram for gathering and roaming was popularized by the Albion Online content creator Stabber (aka NomadPoncho).

We placed this mount as a “special mention” because it’s not your typical gathering mount that you can just bring in full-loot zones. The Frost Ram is very expensive, and inexperienced players who use it may end up losing almost a million silver for nothing.

In terms of pure stats alone, Frost Ram is like an upgraded version of the Moose. Their stats are almost similar with the Moose having a slightly higher HP and max load bonus. However, the Frost Ram can use the ability Leap, which can allow you to escape in certain scenarios where you would otherwise die if you’re on a Moose.

Leap simply lets you jump up to 15 meters away, and you’re immune to damage and CC while you’re jumping. It also has an instant cast time and only a 15-second cooldown, making it a premium escape ability against ganking groups.

The main downside to this mount, as we’ve mentioned, is that its’ really expensive. It costs almost a million silver, so you’re better off using other “safer” gathering mounts if you don’t have this much silver to lose.

The key to maximizing this mount for gathering and roaming is having good map awareness and escape experience. The Frost Ram is an excellent mount for roaming, but it’s far from unkillable. Its Leap ability is an amazing escape tool but only if you know how and when to use it.

*All prices indicated are based on October 2022 marketplace average listings for Normal-Good quality.

By Marc Torzar
Philosophy scholar by day, avid gamer by night—Marc spends most of his free time playing strategy/tactics, FPS, and RPGs on his laptop and console (after he's done all requirements for his graduate studies, of course!).
2 Comments