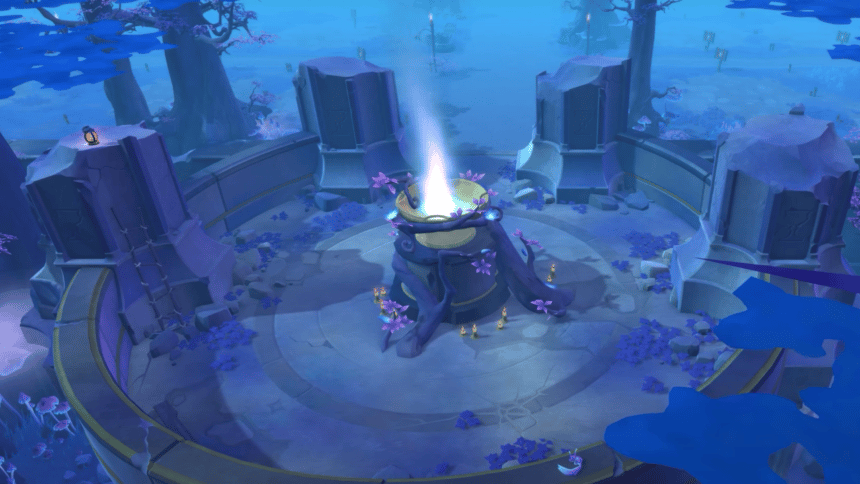 It has been almost six months since the last big content update in Albion Online. Now, new content is upon us. The upcoming update to Albion Online, entitled “Beyond the Veil,” will bring huge changes to the Roads of Avalon and add the mystical region of the Mists.

In this article, we’ll talk about what we know so far about the Albion Online: Beyond the Veil update. We’ll tackle the upcoming reworks to the Roads of Avalon and Roads hideouts, the addition of “The Mists,” Brecilien (a new city within the Mists), new artifacts, and so much more!

Beyond the Veil Release Date

The much-awaited Albion Online: Beyond the Veil update is scheduled to release on November 21, 2022, after the regular daily maintenance that starts at 10:00 UTC. As with previous huge content updates, the regular maintenance for this day will most likely be extended for several hours.

You can also view the official Beyond the Veil update page for other announcements.

Huge Rework to the Roads of Avalon

One of the focuses of Beyond the Veil is changing the landscape of the Roads of Avalon.

Currently, large guilds and alliances are in control of most high-tier Avalonian Rests. These zones are often filled with multiple alt hideouts by the “owning” guild/alliance to prevent other groups from placing theirs.

This current setup goes against the idea behind the Roads of Avalon—a place in Albion where smaller groups can thrive. Fortunately, the upcoming update will make the Roads more accessible to smaller guilds and allow them to compete with larger groups.

The update will allow guilds to make their Roads hideouts into Headquarters. This will be similar to how Headquarters work in the outlands. Headquarters and regular hideouts will require power supplied via power cores, and hideouts with insufficient supply will start taking damage after a certain amount of time.

To give some leeway, there will be a three-day grace period when the update drops for new and existing HOs before they start receiving penalties for insufficient power supply.

Moreover, the initial construction of hideouts can be accelerated to give a reasonable head start for smaller guilds to build their hideouts in the Roads.

Aside from the Headquarters mechanics, multiple content and features previously available only in the open world will be available in the Roads of Avalon.

With the introduction of Beyond the Veil, small portals (green portals with a maximum of two charges) will no longer exist.

On the other hand, medium portals will have their maximum charges reduced by one. These blue portals can fit five players at most within a given period. Previously, they fit a maximum of seven players at a time.

Moreover, raid portals will now be exclusive to “raid regions,” which are zones that contain high-value content and elite mobs. These zones will be located in-between Avalonian Rests (hideout zones), allowing easier access from active groups and guilds in the Roads.

Changes to Logout Mechanics in the Roads

Changes to the logout mechanics in the Roads of Avalon are also included in the update. Currently, logging out in a zone in the Roads and logging back in spawns your character in the same zone. And this mechanic provides considerable strategic advantages.

Many groups or guilds/alliances put scouts in certain Avalonian zones with Avalonian dungeons for fame farming or high-tier resources/aspects so they can gather them later. Some notorious guilds or alliances also leave scouts in Avalonian rests, waiting for the right opportunity to take over the zone from unprepared inhabitants.

The upcoming changes will basically kill this strategy. Logging out in the Roads will return the character to the first zone they entered instead of the zone where they logged out, preventing groups from planting scouts in any zone in the Roads of Avalon. Moreover, players who log out while in the Roads will also lose some gear durability and some of their stacked items.

To prevent or minimize unintended consequences of this change, the window for reconnection will be extended to lessen the chances of penalizing players who unintentionally disconnect while in the Roads.

The Mists – A New Region in Albion

Along with the rework of the Roads of Avalon, a new region will be introduced with the update. The Mists is a new open-world region in Albion dedicated mainly to solo and duo players.

The Mists contain both lethal and non-lethal regions, and there will be a total of three different PvP modes in the Mists: solo non-lethal, solo lethal, and duo lethal.

Players will also encounter familiar faces in the Mists – the old mob factions (Heretic, Undead, and Morgana) that will provide PvE content and fame.

In addition, players will see new and never-before-seen creatures and mobs in this region.

The new creatures include the Griffin, Veil Weaver, and Fey Dragon, which all drop unique artifacts that can be used to craft the new Fey Armors.

Other new creatures included with the update are the Wolpertinger, Veil Prowler, a large owl, and a magical stag, some of which will also provide precious Hide when killed.

Some Mists regions are also enchanted, containing stronger mobs but providing more riches. However, players will need to encounter Will o’ Wisps before they can access these regions.

To prevent groups from overstaying their welcome, tides of fog in the Mists will rise and fall. Regions in the Mists will be consumed by the fog at certain points, engulfing any player caught in it and transferring them back to the first zone they entered within the Mists. This ensures that groups eventually get separated after a while.

Brecilien – The City in the Mists

The update will also introduce Brecilien, a new city located within the Mists. This city does not have a permanent location and has to be discovered first before players can access it. But once you enter Brecilien, you will be able to access it via the Mists portals and travel planner.

Brecilien features a mystical environment and theme, representing the supernatural essence of the Mists. Similar to the other cities, it contains essential amenities, namely, a marketplace, bank, and crafting stations. The city has its own crafting bonuses as well.

The city provides direct entry to the Roads of Avalon, and common Mists regions will also be directly accessible from this location. The city is surrounded by four permanent regions, which mostly contain randomized dungeons, Corrupted Dungeons, Hellgates, and minimal resources for gatherers.

Entering the Roads of Avalon from Brecilien leads to a random Roads zone, and a player entering is bound to this portal for a limited time. However, only up to four party members can enter this portal (for a total of five members), and players joining the party after the bind will be unable to use the portal.

To discourage large groups from wreaking havoc around the city, the surrounding areas will have some form of protective measures to prevent solo players or smaller groups from being camped by larger parties.

Invisibility shrines will be in place, similar to the ones in Portal Towns. There will also be multiple exit portals in a zone. Aside from the portal you entered, there will be three other exit portals plus two more that will link to the other regions around the city—for a total of six available exits.

Moreover, players will lose reputation when they attack other unflagged players. But, this reputation system is separate from the one in the Royal Continent.

Along with the new city of Brecilien comes the addition of new player islands.

Players will be able to own another island based on Brecilien. It has the same price and functionality as the islands in the Royal Continent but does not share the same upgrade levels.

These islands also have a new environment that matches the new city.

Will o’ Wisps are another interesting addition to the game. You can follow these wisps as they roam the Mists or the open world, and they can open portals that lead to other regions within the Mists.

These portals are open only for a limited time and will only allow entry for one or two players. The portals for solo players and duo players are separate.

Interestingly, some wisps may need help, and providing them with assistance will allow you to “earn their gratitude.” Earning their gratitude may provide you with some benefits unknown at the moment.

A significant addition that will come with the content update is the new Fey Armors. These armors can be crafted using rare and unique artifacts that drop from specific creatures in the mist.

There is Feyscale for the cloth armor tree, Mistwalker for the leather armor tree, and Duskweaver for the plate armor tree for a total of nine unique new gears. Some of the new abilities we know so far include Spider Thread, After Image, and Wild Magic.

If you’re a gatherer main, there’s good news for you, too. The update will also add a new enchantment level called “pristine,” which will be the equivalent of an x.4 tier.

If you find it difficult to gather these valuable resources, you can always get them via transmutation.

Beyond the Veil will also bring several QoL changes to the game, including (but not limited to):

What are your thoughts about the new Beyond the Veil update coming to Albion Online? What are the things you’re looking forward to the most? Let us know in the comments section down below!

By Marc Torzar
Philosophy scholar by day, avid gamer by night—Marc spends most of his free time playing strategy/tactics, FPS, and RPGs on his laptop and console (after he's done all requirements for his graduate studies, of course!).
Leave a comment