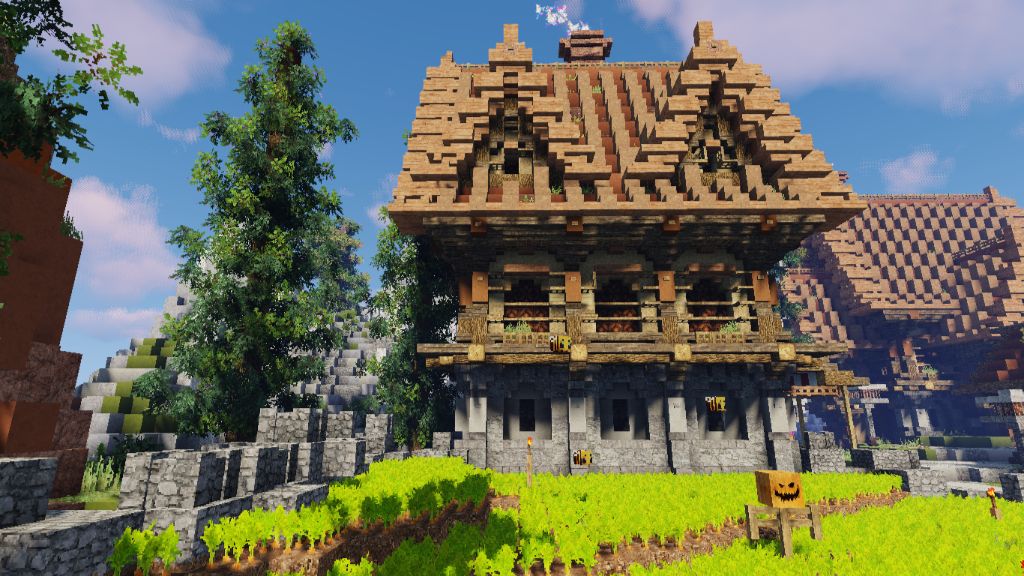 Are you trying to improve your building skill in Minecraft?
I know, it depends a lot on your skill, your imagination, and how well you choose the blocks to build.

Recently, Minecraft 1.17 has just released and it brings up to a total of 750+ in-game blocks!

So which block is good to build with? Which is not? Let’s go along and see if you agree with me about the 20 Best Blocks to Build in Minecraft!

Moss block is one of the blocks within the Minecraft 1.17 update and it has a lot of attention from famous Minecraft builders include Grian, GoodTimeWithScar, and GeminiTay. Despite the fact it’s new, Moss block has a soft green color which makes it look very natural when blending into the ground with grass.

You can also use bonemeal to duplicate them, make Moss block is one of the easiest building blocks to get. Overmore, you can even get Azalea and Flowering Azalea, both of them are the new beautiful sapling that comes along with the 1.17 update.

Like Moss block, Candle is also one of the new blocks in the 1.17 update. Since light source in Minecraft is very limited, some of them even look terrible for decorate your build (Torches for example). That’s why Candle received a lot of positive feedback from the Minecraft building community.

You can use candles pretty much anywhere, from a medieval build style to a haunted mansion theme. They are easy to craft with a String on top of a Honeycomb. And they also can be dyed into 16 different colors to fit your building theme.

Yes! Another light source makes it to the list. The texture of it is very special since it has a transparent gap between the log, make it to be the most unique light source block in Minecraft. Besides that, Campfire leaves a trail of smoke into the sky which you can use to make the destroyed/ruined theme for your builds.

Campfire mostly used in some kind of scaffolding and platforming. You can use them to build a bridge, a grapes base, or a roof. Campfire can be found in the Village. And you can also craft it with just 3 sticks, 3 blocks of wood/logs, and 3 coal/charcoal.

Leaves are the most essential block in Minecraft because it brings up the nature vibe to your build. It fit so well in most of the build. From a rustic house to a futuristic style. Adding some greenery to your build makes them look a lot more natural and brings in the color of life.

Depend on which biome you built on, you can use the corresponding leaves type to make your build look cooler! Remember to make a shear or a hoe to harvest the leaves!

Just with 6 wood planks of any kind, you can make yourself a trapdoor, which can be used for your hide hole or reinforcing your build. You can put them around pillars, create a holder in your house, and much more!

Since trapdoor has 6 different variations and each of them has a different texture, you can mix them to add a bunch of detail to your build.

When it comes to building a wooden object, like a custom tree, you will want to use Wood blocks for the tree’s root. Since wood block having a bark texture on all 6 sides, making it look super clean and polished to use. Wood block is often used in the corner of the build/frame to achieve the complete feeling.

One thing to note is in order to craft a Wood block, you actually need four logs. So 4 stacks of logs would be 3 stacks of Wood blocks. That’s a waste of resources!

Do you just leave your dirt house to make a new wooden house?

Instead of using Log block to make the frame for your build, you can also use Stripped Log by right-clicking the Log with an axe. That will make the texture much cleaner and brighter. You can even mix the normal log with a stripped log to create some contrasts to the build.

Do you right-clicking too much that your mouse can’t handle it? Take a look at these Best Mouse for Minecraft in 2021 and ready for the mega stripped log build.

What is the cleanest block in Minecraft?

I’d answer Concrete immediately! The texture of Concrete is mostly solid and many people love it because of that. And not stop there, Concrete is also dye-able into 16 different colors! Just combine 4 sand blocks, 4 gravels, and any dye color of your choice and you’re good to go!

Grian’s base in Hermitcraft season 6 is one the most Concrete-use in the entire season.

Leaves make your build look natural, but how about a mossy block? When it comes to building, you may want to apply the rules of life to Minecraft.

When you’re building something near the water, over time, obviously they will have moss slowly grow on the blocks. So adding a mossy block near the water source will make your build lively and more realistic.

But the mossy effect doesn’t happen in-game. That’s why mossy cobblestone is craftable with a cobblestone plus vines or a moss block.

Copper is the new ore in Minecraft 1.17 update and for the first time in Minecraft history, we can have the industrial-looking block to build with.

In the past, building a factory or a steampunk theme is really difficult because of the block limitation in Minecraft. But nowadays, you can see a lot of Steampunk builds, one of which is Scar’s base in Hermitcraft season 8.

While looking incredibly cool, Copper is oxidized over time and will turn green. So if you want to keep the copper color, make sure to use a honeycomb to wax the block to keep its original state forever!

To be honest, we’re used to using Glass block to build a window in Minecraft, right?

But things have changed, Stained glass is here to save the day!
With a softer texture than original glass, Stained glass also can be dyed into 16 different colors and it brings up the decoration style to a whole new level!

However, unlike Glass, which is only required one block of sand to make. The stained glass required at least 8 blocks and a dye in order to craft it. But it worth the effort though!

Coarse dirt is the mixture of dirt and gravel, which you can use for the pathway or placing around your farmland. Since it doesn’t have the ability to spread, you can freely use coarse dirt without worrying too much. Unlike mycelium 🙁

If you’re gonna build the wasteland theme, Coarse dirt would be the first priority block to get. Combine with the Wood block, you can even make a dead tree stand lonely in the desert of wasteland. Pretty unique!

When you place them inside the water, they will return to their life and has 5 different colors in total. Their texture is also kinda weird with a lot of noise in them. Like how the coral look in real life.

However, if there is no water source near them, the block color and saturation will become gray, just like a no soul rock. In this state, you can use them to mix with cobblestone andesite and gravel to make a gradient palette texture for your build.

I bet that you’re all building a castle in Minecraft, using stone brick.
Haha! So we do have the same ideas!

Stone bricks’ texture itself looks very clean and they are super easy to break. Easy to build and easy to break is the old Minecraft criteria. Stone bricks also can be easily crafted with Stone, which is smelted from Cobblestone in a 1-1 ratio. Pretty good!

Hm… You may wonder why the most basic block (and kinda ugly) is in this list, but Cobblestone is by far the most used block in the history of Minecraft. It’s because you can get your hand on Cobblestone very early in the game, and there are several ways to obtain it. One of them is just required a wooden pickaxe to go!

Cobblestone is good for the base of the building and when mixing with white/grey gradient texture blocks.

Check out this Medieval gate build here to see it!

Are you a fan of iskall85?
Well… You probably in the wrong place right now 🙂

According to iskall85, Diorite is the most disgusting block in Minecraft because it looks like bird poop. He will immediately burn any diorite he finds even it belongs to someone else.

But when it comes to building, diorite and its family blocks are actually super good to use. Especially in medieval builds!

Till now you only see blocks to build in the overworld, but how about the Nether?

Quartz once to be the number one cleanest block in Minecraft until Concrete was released. In order to obtain Quartz, you must go into the Nether and mine enough Nether quartz. The ratio for this craft is 4 Nether quartz equal 1 block of Quartz. Pretty terrible but at least you get the exp.

With Quartz block, you can build an Angel Temple, Cloud Temple, or Greek Temple.

Whenever you want to add more detail into your build, trapdoor, button, or fence is the most common choice of all time. It gives your build contrast, something to look at, and sometimes it supports the build to make the blocks do not fall all over the place (think a little realistic here)

You can’t just build something in the middle of the air, right? – Unless it’s some kind of magic 😛

So like most of the wooden blocks, a fence also comes with 6 variations from which you can choose to make your build look better!

Besides making Concrete, Gravel is a part of white/gray gradient texture blocks. You can easily mix them with cobblestone, andesite, and stone bricks to make the build look much better.

You can pretty much find Gravel anywhere in the overworld, from the river down to a cave. Piglin in the Nether also trades Gravel in a batch of 8-16 for a gold ingot.

Book makes you smarter, don’t they?
So how about a whole bookshelf? Well, you will have a big brain soon!

Interior building is by far the most difficult thing to do in Minecraft. You need to build in a limited space and you also need to make sure it looks good! Some people even make it compact and functional to live.

Interior blocks like barrel, chest, flower pot do look good, but bookshelves are the best of them. Since they also provide enchantment usability and it makes you smart. So, spam that bookshelf!

Now it’s your turn to build!

We’ve gone through the list of 20 Best Blocks to Build in Minecraft! Let’s get your Minecraft open and start your build now!

If any chance you don’t have any ideas to build, feel free to take a look at these Minecraft Base Ideas. Use the blocks above, and let me know if your build is improved!

By Binh Tran
Whether you want to build better in Minecraft, to make a Minecraft animation series, or even code your own Minecraft mod, then feel free to check my articles!
2 Comments