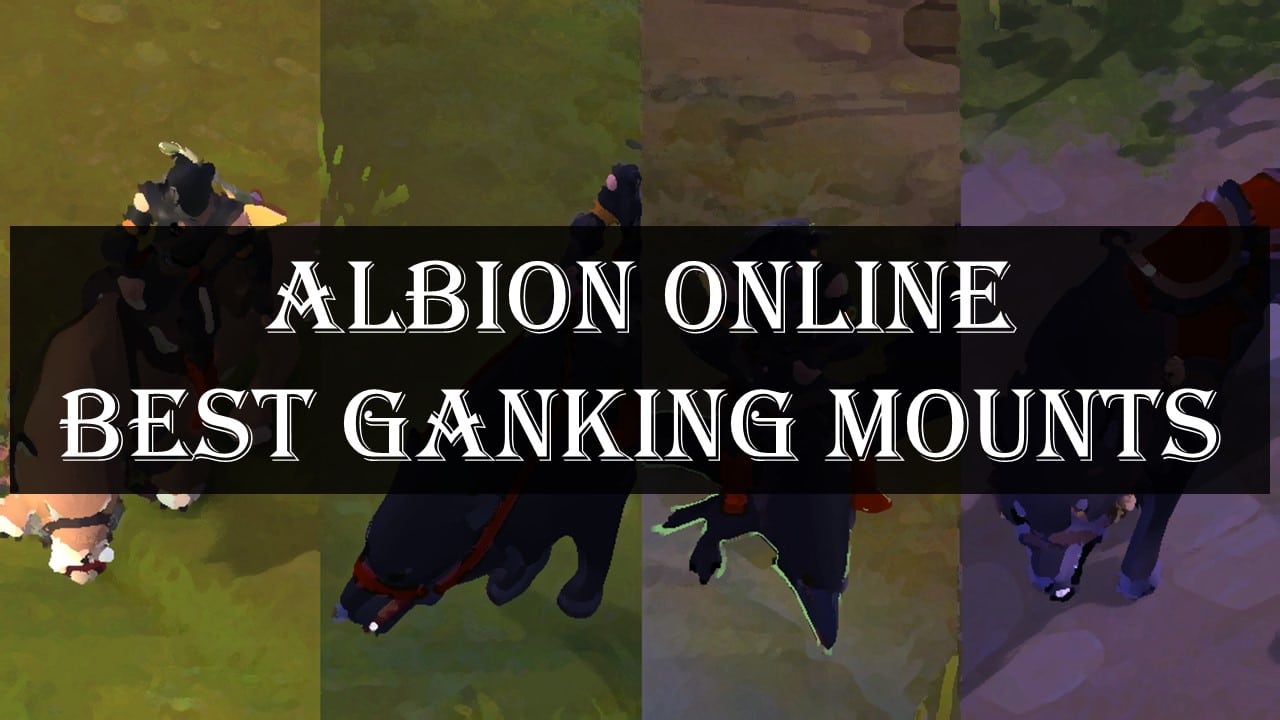 Most Albion Online veterans would agree that ganking is one of the most lucrative and fun activities in the game. But aside from having optimal ganking weapons and builds, you’ll also need the best mounts for ganking if you want to see those huge profits.

The problem is that there are many available mounts in Albion Online, but not all of them are good for ganking.

There are a total of 80 different kinds of mounts in the game, which may be an overwhelming number for beginners. Not to mention that some of these mounts are inaccessible to even the veterans of the game, let alone the average player.

But don’t worry, we wrote this article to help you. If you’re new to ganking and are looking for the best ganking mounts, read on.

What Makes a Mount Good for Ganking?

Before we delve into which mounts are good for ganking, it’s better to understand first what makes these mounts good.

When looking for the best mount to use for ganking, the single most important factor is its speed. Without enough speed, it’s practically impossible for you or your group to catch anyone.

Most players in full loot zones will be prepared and always have their mounts ready when needed, which leaves you with very little chance of catching them on foot. So aside from trying to dismount them, your best bet is to outrun their mounts using your own.

Base and Gallop Move Speed Bonus

On the other hand, gallop move speed bonus refers to the additional speed buff you receive after a few seconds of moving while on your mount. However, the bonus speed buff is removed when you unmount or when your mount takes damage, which also puts it on cooldown for a few seconds.

As you can imagine, mounts with high base and gallop move speed bonuses are ideal for ganking. Hence, these are the two most important values to look for in choosing your ganking mount.

Moreover, the delay before gaining the gallop move speed buff is different for every mount. Some mounts like the Direwolf and Saddled Greywolf have a five-second delay, while others like the Moose and Stag only have a two-second delay.

However, the gallop buff timer is almost irrelevant when it comes to ganking. Since you’ll mostly be the one doing the chasing (and inflicting damage), you’ll have the buff on you most of the time.

This factor is usually relevant when you’re the one being ganked. Receiving damage removes your gallop move speed buff, so you’ll have to wait for the gallop timer to gain the buff again. Therefore, the shorter the delay, the higher chance you’ll get away from your gankers.

As we’ve mentioned, the most significant factor in determining a good ganking mount is its speed. However, we include the average market price of a mount as another criterion because of practicality.

Players in Albion Online don’t have access to infinite silver (or do they?), so economic concerns are always a factor in most activities, especially risky ones like ganking.

Although some mounts are better and faster than others, their price difference may be too big despite only having a minimal (and sometimes insignificant) upgrade. In these cases, these upgrades may simply not be worth it.

Now that we’re in the clear regarding our criteria, here’s the list of the best ganking mounts in Albion Online.

The Swiftclaw is arguably the best ganking mount in Albion Online. It’s among the top fastest mounts in the game, and it’s also relatively cheap.

Swiftclaws are generally the default mount for gankers due to the combination of their high move speed bonus and relatively cheap market price. Although the Swiftclaw is slower than some of the other mounts, it’s the optimal mount when you consider its speed-to-price ratio.

This mount has a base speed bonus of 75% and a gallop speed bonus of 120%. These values are both high enough to let you keep up or even overtake other mounts.

Considering that the speed difference is not game-breaking by any means, it’s better to just buy three Swiftclaws than just one Direwolf, especially for beginners or players who are running short on silver.

However, if you have a ton of silver and don’t mind spending more for a better mount, then no one’s stopping you from using the superior Direwolf.

Next on this list is one of the Adventurer’s Challenge mounts, the Morgana Raven.

The Adventurer’s Challenge mounts are part of the several unique mounts that you can get as a monthly reward if you accumulate enough keys within the month. Though you’ll also need to have an active premium in order to claim them, and they’re only available as a monthly reward once a year.

The Morgana Raven was a very common ganking mount until its abilities got nerfed. Its abilities Raven Scream and Reactive Scream used to be able to affect mounted players. They allowed ganking groups to effectively prevent any mounted player from escaping (with enough coordination).

Fortunately, the abilities were nerfed to only affect unmounted players. You can still fear your targets with these abilities, but you’ll have to be able to dismount them first.

Surprisingly, the Morgana Raven is relatively cheap despite being a “rare” monthly reward via the Adventurer’s Challenge.

However, we still put this mount on our top four because despite being an inferior version of the Direwolf, the Saddled Greywolf is still much faster than most other mounts in the game.

The four (actually five) ganking mounts we listed above are the best in terms of speed and cost. However, there are a few other mounts that are still effective for ganking but didn’t make the list either because they require a niche strategy or are too expensive for the minuscule extra bonus speed they offer.

In terms of gallop move speed bonus, the Elite Greywolf is the fastest ganking mount in the game. It boasts a gallop speed bonus of 135%, which is unmatched by any other mount.

However, the additional 3% increase in speed and extra HP aren’t really worth the extra millions of silver that you have to pay. The average market price for the Elite Greywolf is a whopping 3.4 – 3.5 million silver! You’d have to be great at making silver to be able to afford that and casually use it for ganking.

The Elite Greywolf also possesses the unique ability, Hunter’s Mark. This allows you to fixate on a single target and gain even more speed as you follow your target.

But this ability is more intimidating than practical. It doesn’t really provide much more value for ganking than simply having a competent gank group, and the latter won’t cost you more than three million silver.

The Pest Lizard belongs to the unique group of mounts with a particular theme: their base and gallop move speed bonuses are equal, and they’re all lizard-like creatures.

What makes the Pest Lizard viable for ganking is its unique abilities Toxic Cloud and Toxic Reaction. They work similarly to the Morgana Raven’s abilities, so you can use them to disable your targets.

The idea is to use Toxic Cloud on an entrance to block off your target. You can also purposely let a mob hit your mount to trigger Toxic Reaction and fear any nearby enemies.

However, due to the “cheesy” nature of this strategy—not to mention the low speed and high cost of the Pest Lizard—using this mount for ganking may seem more like a meme at this point. This mount is also expensive, costing at least half a million silver on average.

However, they’re still unique in their own ways because of the different abilities that they possess. The only issue is that they’re usually more expensive (in the case of Spectral Bat and Snow Husky) or their abilities aren’t as useful for ganking (in the case of Divine Owl).

*All prices indicated are based on October 2022 marketplace average listings.

By Marc Torzar
Philosophy scholar by day, avid gamer by night—Marc spends most of his free time playing strategy/tactics, FPS, and RPGs on his laptop and console (after he's done all requirements for his graduate studies, of course!).
Leave a comment