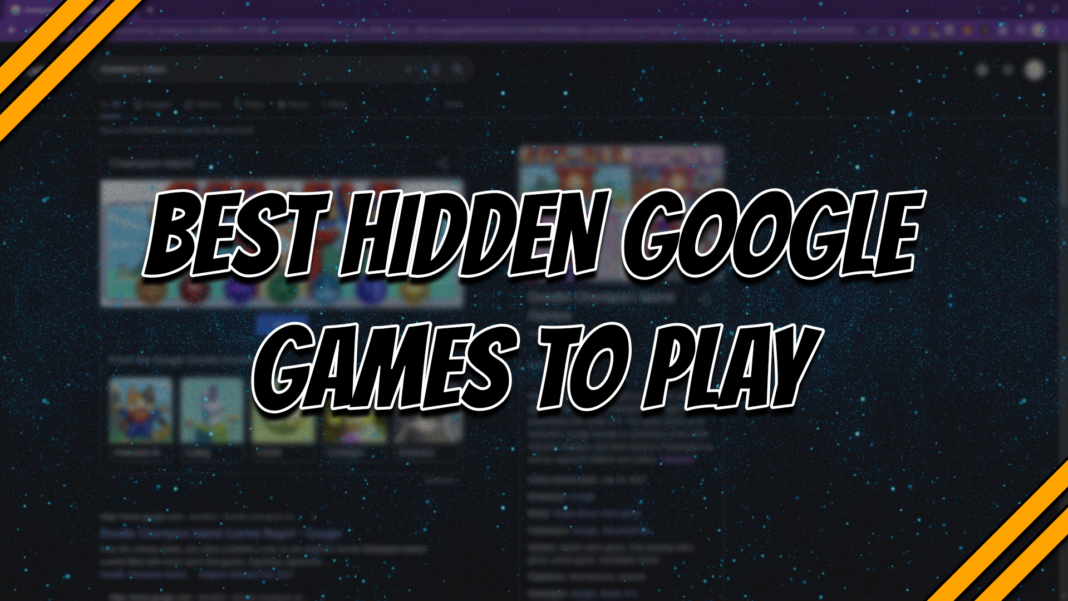 We all know that Google likes to mess around. They often change the look of their logo and add special themes that resemble the holidays or commemorate a special day in history. Google is also known to add a lot of different easter eggs from their search engine to their browser.

These hidden google games can easily be played on any modern browser and are simple enough to learn within a few minutes. Usually, these games can be found by searching specific keywords.

Follow our guide below to find out how to access the best hidden google games that you can play.

How to Find and Play the Best Hidden Google Games

We’ve all been super bored and got nothing to do at one point or another. While bored, you might’ve accidentally stumbled upon a secret Discord command or a hidden easter egg that you didn’t know existed. Being the fun company that they are, Google hid some games that you can play straight from your browser.

Obviously, these aren’t going to be triple-A titles with insane graphics or NFT games that can help you earn money. But, they’re amusing games that you can quickly play if you’re simply just bored or have a few minutes of extra time on your hands.

Our little dinosaur friend appears when you don’t have an internet connection or google can’t connect to the internet. You’ll be greeted by the “No internet” page with the little T-Rex above it. If you press space, the mini-game should start, and you can start to control our dinosaur friend.

The goal of the game is simple, jump over the cacti using your spacebar and keep the dinosaur alive. This is an endless game that goes on forever and speeds up slowly until you’ve mistimed a jump and hit a cactus.

If you have a stable internet connection and don’t want to unplug it or disconnect from your Wi-Fi to play the game, you can still easily access it from your browser. Simply type “chrome://dino” in the search bar and hit enter. This should bring you to the dino game, and it even zooms in for you, making the game bigger.

Enjoy playing the game and take care of our little dino friend!

Solitare is another classic game that’s been around for as long as we can remember. It’s one of those games that you can play at any time and anywhere as long as you have a deck of cards. It’s probably the first card game you have ever played.

It used to come with the Microsoft operating system, and you can easily just play it on your PC. However, Microsoft now provides an online version, complete with different daily challenges, events, and types of solitaire.

If you’re looking for a quick and easy way to play solitaire, all you have to do is search for “Solitaire” using Google search, and the first result should allow you to play solitaire for free. Just click on the “Play” button, and it should automatically load.

The graphics are pretty simple. The card backs feature a blue background and the Google logo. You can also choose from two modes, easy and hard. The game also tracks your time, score, and total moves.

Overall, it’s a pretty simple game that you can easily use to kill some time. Unfortunately, the game doesn’t maximize and appears in a small window. But it’s definitely a cute little hidden Google game to play.

Pac-Man is another solid classic game loved and enjoyed by almost everyone. It’s an old video game released back in 1980 for arcades. It’s an action maze chase video game where you control a yellow ball character with a mouth.

In Pac-Man, all you have to do is eat all the dots placed all over the maze and avoid getting touched by the four colored ghosts. There are also different powerups throughout the map. These powerups allow you to eat the ghost and score some extra points. You usually have three lives to complete the level.

Not many people actually know this, but the ghosts actually have names. Blinky (red), Pinky (pink), Inky (cyan), and Clyde (orange). They also have set patterns that you can use to your advantage. Red always chases you, pink tries to position itself close to you, blue tries to ambush you, and orange is random.

To find the hidden Google game, search for “Pac-Man” and simply press “Play.” The game has a similar design to the classic game but has incorporated the “Google” name into the main design of the maze.

Next up, we have an amazing game that also teaches you how to the basics of coding. It’s a game that was first added to the list of hidden Google games back in 2017, but it still’s a pretty good game to play today.

It features a cute little bunny hopping around collecting carrots. You get introduced to a total of four different coding blocks. Each block corresponds to a specific action that the bunny will perform. The green block moves the bunny forward, the two blue blocks turn your bunny left or right, and the orange block repeats the sequence inside of it.

Coding Bunny is a fun and challenging game that allows you to learn basic coding skills. It’s a great game to let your kids play. It’s colorful, has great graphics, and features a cute little bunny. Kids will surely love it.

Unfortunately, Coding Bunny only has six different levels. The difficulty increases each level and requires you to think more about how you place your blocks and how you’re going to find the shortest possible solution.

It’s a great game to play and is as entertaining as some of the best PC games out there. Coding Bunny is definitely one of my favorite hidden Google games.

You can find the hidden Google game by searching for “Coding Bunny” using the Google search engine.

The snake game is a game that was popularized when it made its way to the Nokia mobile phones in 1997 up to the early 2000s. We all know and love the indestructible Nokia 3310 and the beloved snake game that came with it.

The hidden Google game snake is an updated and more modern-looking version of the game. The goal and mechanics of the game are still the same, though. You start off as a cute little snake who’s hungry for some food. All you have to do is collect the food that appears on the map and try not to bite yourself as you get longer or run into any walls.

Aside from changing the graphics and design, Google also added some new options. You can choose the appearance of the food you eat, the speed of your snake, the amount of food that appears on the map, and the color of your snake as well.

But, the fun doesn’t stop there. They also added in some extra game modes that help make the game challenging and fun. There are a total of 13 additional game modes aside from the classic snake game. Some of these game modes include a teleporting snake, moving food, multiple snakes, and a peaceful mode where you can’t die.

You can find the hidden Google game by searching for “Snake Game” using the Google search engine.

Next, we have another single-player puzzle game that can easily help you pass the time. Minesweeper is another game that used to come included with different Windows operating systems. Unfortunately, Microsoft has removed Minesweeper from modern Windows OS. But, you can still download a version of the game using the Microsoft Store.

The goal of the game is to clear the field of mines or bombs without detonating them or clicking on them. There’s a bunch of numbers scattered around the field. This indicates the number of mines or bombs that surround that specific number. You can use these as guides to make sure you don’t click on a mine.

It features the same green-colored board as Google’s snake game. But, it doesn’t have any other settings aside from being able to change the difficulty. To access the Minesweeper game, search for “Minesweeper” on Google and click on the blue “Play” button.

Doodle Champion Island Games or more commonly known as Champion Island, is a browser-based game created by Google. It was released in 2021 to celebrate the 20202 Summer Olympics and the 2020 Summer Paralympics.

It’s hands down one of the best hidden Google games that you can play and is one of the longest games ever created by Google. It’s a sports action video game with RPG elements. You start out controlling a cat named Lucky, and you are able to roam around an island with seven major regions.

Each region has a champion who specializes in a specific sport. Your goal is to beat all of the champions and become the “Island Champion.” All of the sports are designed as mini-games and take inspiration from different games like Tony Hawk Pro Skater and Dance Dance Revolution, just to name a few.

There are also plenty of side quests that you can do for each region. It’s basically a complete but short game where you can spend countless hours playing and exploring the island.

Cricket is a game of cricket that’s literally played by crickets. To swing at the ball, all you have to do is press the spacebar. Perfectly time your swing to hit the ball and earn some points. The game ends once you’ve missed. Did I mention that you’re playing against snails? It’s definitely a fun and goofy hidden Google game to play.

Scoville is a game that focuses on Willbur Scoville eating hot chili peppers and then cooling down with some ice cream. Your goal is to simply throw some ice cream by timing using a bar and three ice cream scoops. You need to time your throws when the bar is over the green area. You do this repeatedly until you reach the pepper with the highest Scoville number.

It’s definitely a fun game to play and is one of the more challenging ones on the list.

Let’s do a little throwback To Halloween of 2016. This game was released during that specific holiday. You play as a sorcerer black cat trying to get rid of all the ghosts in the way. All you have to do to eliminate the ghosts is to draw the shape/symbol that appears above their head.

There are different levels with increasing difficulty. It’s a game that challenges your awareness, speed, and reaction time.

Finally, let’s talk about Garden Gnomes. Garden Gnomes have some mechanics that are quite similar to Angry Birds. You load up gnomes on a slingshot and try to throw them as far away as you can. There are also different gnomes that each react to the environment in different ways. Make sure to try all the gnomes out and find one that you think will get you a new personal record.

There are a few other games and interactive activities that you can find from Google Doodle Archive. Unfortunately, we can’t talk about all of them so just make sure to check them out.