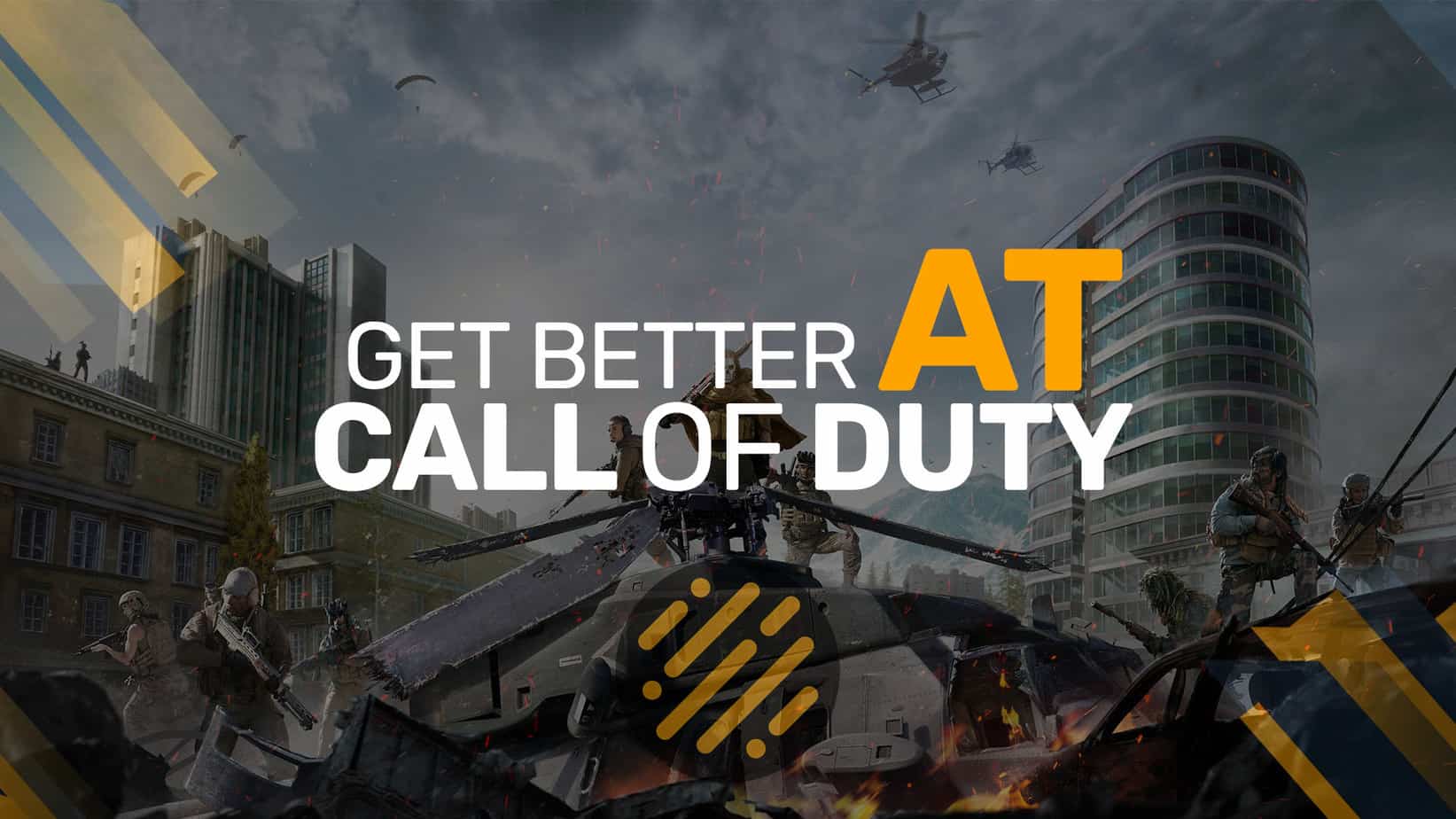 I’ve been playing Call of Duty competitively for nine years now, so take it from the horse’s mouth when I say I know a thing or two about getting better at Call of Duty. If you want to get better at CoD, whether for online or Warzone, there are five things you need to work on:

These days, the only people offering you tips on how to improve at Call of Duty are washed-up YouTubers that would get stomped in a minute flat by even the worst amateur team. Trust me, I’ve been there, and I’m telling you it’s true.

Rather than relying on dollar-store Ali-As or any of the other Activision corporate shills, put your trust in me. I may be a random guy on the internet, but I’m your best hope at getting better at Call of Duty.

You could shoot like John Wayne himself, but you’re not going to get any better without knowledge of the map, as well as how to rotate around it.

I remember the competitive maps from each CoD title that I can run through each of them in my mind, including all of the nooks and crannies, camping spaces, lines of sight, sniper peeks, and more.

If you want to get better at CoD, this is the kind of memorization you need to do. In fact, I value it so highly that it’s the first thing I do when a new game comes out. I’ll jump into private and just run loops until I get the layout down.

This is even more important if you want to get better at Call of Duty Warzone. You’re dealing with one massive map here, so memorizing it is more or less off the table. Instead, you need to focus on your rotations.

So, what are rotations? I’m glad you asked Little Timmy. Rotations are how we in the know refer to the way we move around the map based on where we need to be. If I’m at point A and I’m needed at point C, then how I get from A to C is my rotation.

In multiplayer, this is affected by spawns, but Warzone is a different matter entirely. Your rotations here refer exclusively to how you move inland when the storm is coming in. You want to stick to the edges in areas that are going to be sparsely populated by other players.

Most importantly, though, for both game modes, never rotate into the low ground. If you’re running away from the storm into an enemy camped up in a tower, you’re done for.
Getting better at rotations is trial and error; learn what routes on the map work for you and your skillset, and combine that knowledge with your awareness.

This is baby’s go-to answer when you ask him or her how they can get better at Call of Duty. Let me honest with you, kiddos, being able to shoot straight doesn’t mean ANYTHING. When you get good at Call of Duty, you’re going to be playing against good players, and I hate to break it to you, but they can all shoot straight, too.

This isn’t a skill to hone so much as it is a necessity. If you want to get good, you need to be able to hit what you’re shooting at.

It doesn’t matter if you’re using a controller or a mouse and keyboard, the same rules still apply, and those rules are as follows:

Sorry, but I’m no Adderall dealer. I can’t give you a magic pill to make you not shoot windmills around your opponents. The only way to do that is by practicing, and the only real way to practice this is in private matches with bots.

Back in my hay day, every morning before I competed with my team, we would each load up our own bot-infested private matches and practice our shooting and movement for about an hour. We’d end up with thousands of kills before it was over, but guess what? We would be warmed up, and our shots would be focused.

It’s going to suck at first, I’ll admit, but if you want to get better at shooting, that’s what you have to do. Oh, and make sure you have the right sensitivity, but I’m not going to insult you by saying you haven’t already thought of that.

What I will insult you with is by saying I bet you didn’t notice me mentioning movement? Yeah, I thought not. Well, I hate to break it to you couch potatoes, but being good at moving around is critical to getting better at Call of Duty.

This is more important in multiplayer than in Warzone, but it counts for both. If you can’t duck, dodge, dip, dive, and dodge your way around bullets, then BANG! You’re dead—every time.

Again, practice makes perfect, but if you want to optimize your practice, load up an SMG and get right up there in your enemy’s faces for a few weeks. This trial by fire is either going to reduce you to tears or force you to start moving well. Or both. Most of the time, it’s both.

As an OBJ (objective) player, having good awareness was my bread and butter during a match. Now, I sure as hell hope that you know what being aware means because if you don’t, then you might want to jump back to Fortnite.

For all the big boys that are here to stay, being aware in-game doesn’t just mean listening for Mummy dearest footsteps coming up the stairs at 1 AM on a school night while you’re playing; it means listening for your enemy’s footsteps, reloads, killstreaks, equipment, and so much more.

When I’m in the thick of things, I can give you a fairly accurate estimation of where every single person on the map is, what guns they have, if they have killstreaks, and what my team needs to do in order to counter them. That’s what awareness is; it’s knowing what’s going on around the map outside of your lines of sight.

If you want to get better awareness, I’ve got two tips for you:

Yeah, yeah, this is a cop-out by making it a combination of two other skills, but it’s true. Awareness is the culmination of the rest of your gameplay coming together, making it possibly the most important skill you can develop, meaning that your coms and map knowledge are the most important skills to work on by extension. I’m not just saying that because I’m good at it, either.

It doesn’t matter if you’re like me, a quiet and shy kid with no self-esteem, or whether you’re like Aaron from high school, who was a loud, obnoxious jerk; you need to be able to communicate with your team.

Most of you out there trying to get better at Call of Duty Warzone have already started doing this, and it warms my old veteran heart. We’re a far cry from the crucible of carnage that was MW2 public lobbies. Just earlier on today, I was listening to my girlfriend’s brother calling out on Warzone with his mates from the gym, and who would’ve thunk that would ever happen.

So, the barbell (it’s a joke, get it? Because he goes to the gym?) is literally on the floor when it comes to sharpening up your coms, so if you want to get better at Call of Duty, this is mandatory. Yes, you in the back, this is going to be on the test.

I don’t care if you want to get better at CoD on PS4, PS5, Xbox, PC, or your goddamned microwave; you need to call out. I’ll accept calls like “he’s in the building” for now, but you need to work on that.

Get together with your team and establish specific callouts for areas and buildings. This is easy if you want to get better at Call of Duty multiplayer but can be tricky for Warzone. Rather than having the boys memorize an Atlas, pick the spots that you find yourselves in the most and assign some specific callouts to different buildings. I’m a fan of calls like “grandma’s house” and “Herbert’s basement,” but that’s just me.

Last but not least, you have to play the meta. I know it sucks, but that’s the price you have to pay to get better at Call of Duty.

At the end of the day, a gunfight is a gunfight. If you and your opponent are at the same skill level, then the person with the better gun is going to win. Therefore, if you want to get good, you need to have that better gun.

You don’t need me to tell you how to keep up with the meta; just run back to your precious YouTubers for that. Those guys love leaking all the secrets that people like me find for some quick ad revenue.

That’s all I’ve got for you. Getting better at Call of Duty, whether online or Warzone, is tough, and you’re not always going to have fun. However, it’s super rewarding. Trust me when I tell you there’s nothing better than becoming a popular kid at school because you’re infinitely better than everyone else at Call of Duty. I’ve lived it, and I want you to, as well. We can’t all be losers for life, after all.