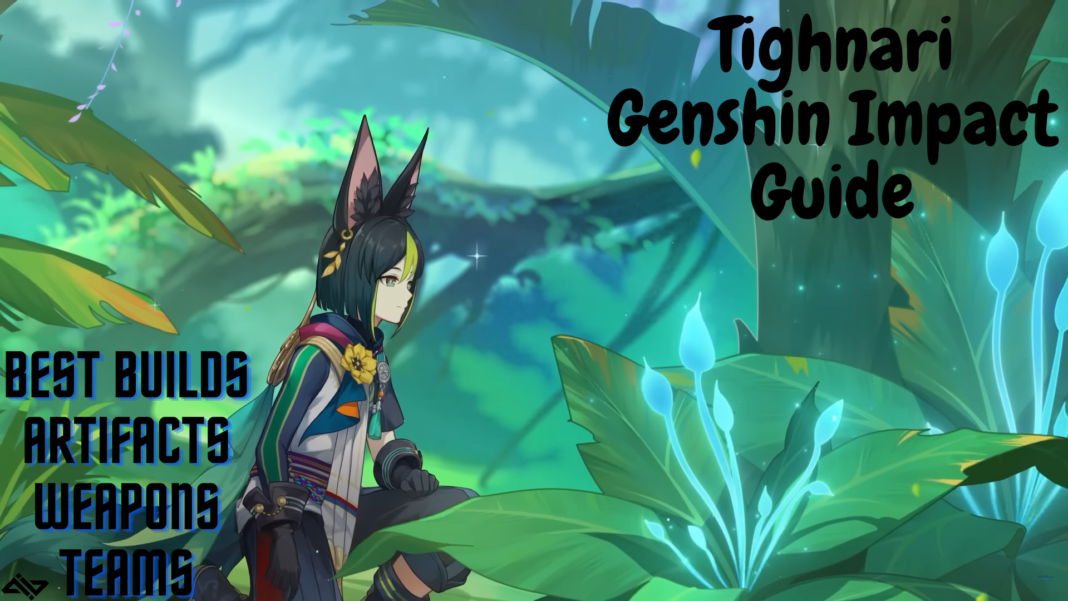 Hello folks! Genshin Impact has just gone ahead and released the 3.0 update, bringing with it the new Dendro Element, an entirely new region to explore, Sumeru, and two brand new characters, Tighnari and Collei. In this build guide, we will be discussing Tighnari solely (look forward to Collei‘s guide). We will talk about his best Artifacts, constellations, weapons, the cost of leveling him and his talents, and lastly, his team comps. But first, a brief introduction is due.

Tighnari is Genshin Impact‘s newest 5-star release, a Bow user with a Dendro Vision. He is available on the limited banner event “Viridescent Vigil” alongside Zhongli, Gentry of Hermitage. After expiration, Tighnari will also be available on the Standard Banner. So no pressure in losing the 50/50, right?

Tighnari’s DMG output is somewhat comparable to that of Ganyu. He is easily able to wipe out stronger, single enemies with multiple Clusterbloom Arrows that branch off his main shots. But of course, one should always try out a character themselves before wishing on them.

When building Tighnari, it is important to level him up. At certain milestones, Tighnari gains Dendro DMG bonus and will need some extra items to proceed:

To maximize the DMG output of your Tighnari build, it is important to upgrade his combat talents. This table accounts for the costs and materials of one of the three talents (these stay constant for all of his talents)

Our Botanist’s talents are based pretty heavily on him being a hardcore DPS character, his passives boost his already powerful Burst Attack and also provide the traveler aid when gathering items in Sumeru.

After Tighnari fires a Wreath Arrow, his Elemental Mastery is increased by 50 for 4s.

For every point of Elemental Mastery Tighnari possesses, his Charged Attack and Fashioner’s Tanglevine Shaft DMG is increased by 0.06%. The maximum DMG bonus obtainable in this way is 60%.

Tighnari has a 4-sequence normal attack and a charged attack that deals Dendro DMG.

This is not all though, Tighnari’s charged attack can be held for longer to provide a stronger attack, called Wreath Arrow. When it hits an enemy, it splits into 4 Clusterbloom Arrows. This 5-pronged homing barrage does a flurry of Dendro DMG, severely punishing the enemy. Prioritize this ability above all others!

However, it is not feasible to wait for 3-4 seconds to let Tighnari charge up. However, Tighnari’s skill provides a practical solution.

This effect is comparable to Ganyu’s C6. This effect will disappear after Tighnari has fired off 3 Wreath Arrows. This ability can be upgraded last since its effects are not that important to Tighnari’s DPS abilities.

Tighnari’s burst style is similar to Ningguang’s. Both characters fire off a barrage of projectiles but Tighnari’s is slightly different in that it hits the opponents twice. I.e. 6 projectiles are shot off, and another wave of 6 projectiles will follow.

If you’re using an Elemental Mastery build, making use of his passive, this ability should wipe the floor with most enemies easily. The low energy cost makes it all the more worthwhile to invest into his burst!

A brief note is necessary here.. C0 Tighnari is an amazing unit. Please do not feel forced to roll for a character’s constellations. They are nice to have and can boost the effectiveness of a character but aren’t worth spending real-world currency on unless you have a large reserve of expendable income.

If you do end up getting his constellations, congrats! Let us swoon over them together.

Beginnings Determined at the Roots

Upon activation, Tighnari’s charged shots do more DMG. However, this constellation can be substituted and even paired with Cryo Resonance, which buffs your whole kit.

Origin Known from the Stem

This buff might be tricky to use since Tighnari does not have an aiming mechanic built into his skill, although the field attracts enemies towards it, so it shouldn’t be too much of an issue. The Dendro DMG bonus, paired with Collei running the Deepwood Memories set shredding enemies Dendro Resistance will yield fantastic DMG output.

Fortunes Read Amongst the Branches + Comprehension Amidst the Flowers

These constellations serve to buff your characters’ skill and burst.

Withering Glimpsed in the Leaves

This constellation can provide your party with a decent Mastery boost up to a maximum of 120. Enabling a support style Tighnari who could buff Kazuha or Sucrose to name a few of every other DPS character that makes aggressive use of reactions.

Karma Adjudged from the Leaden Fruit

This requires further testing on my part. We do not know if this constellation makes his Charge time instantaneous when under the effect of his skill, although it seems like it does make a difference using his charged attacks even when not under Vijnana Suffusion(the effect that reduces level 2 charge time). The extra arrow DMG is just nice to have.

We highly recommend going for an EM build Tighnari, making use of the new Gilded Dreams set. Since that set is new and not everyone may have good pieces, a Wanderer’s Troupe set could serve as a temporary replacement.

This set is very good for Tighnari. The increased EM and charged attack DMG make it suitable for a DMG-focused Tighnari build. As a plus, this is one of the original sets in Genshin, having been around since the game began, so most players may already have a few decent pieces.

Building Tighnari with this set should result in pretty powerful Burst shots! While you may start off with the Wanderer’s set, note that the DPS of both of these sets is pretty similar, to the point where it’ll come down to whoever has the better substats.

Although this set gives a 15% Dendro DMG bonus and also shreds enemy Dendro Res, it just isn’t that good since it doesn’t make use of Tighnari’s EM boost mechanics. Although, upon the release of more Dendro characters, if you’re looking for a support Tighnari, then you could consider making use of this set.
It does ,however, make sense to use this set on at least one of the support characters on Tighnari‘s team to maximize his DMG. Off-field characters that can constantly apply Hydro or Electro such as Kokomi or Fischl can make good use of this set to shred enemies Dendro res.

Based on what we’ve already discussed, it has been concluded that Tighnari prefers an EM-focused build.

An EM sands should work best on him, although, if you do not have a valid piece, ATK works as a temporary replacement till you find a viable EM piece.

For his circlet, You can consider using either EM or CRIT Rate/DMG. I recommend CRIT Rate/DMG so that your total is in a 1 to 2 ratio. This will ensure that your attacks are doing extra DMG and not just brutely dependent on reactions.

This weapon is Tighnari’s Best in slot weapon. It effectively buffs his charged attacks and showcases the need to build Tighnari as an EM monster. Can we talk about the CRIT Rate at level 90? You can’t look at that and not feel sorry for the enemies.

If you do not have this weapon, then you can use other 5-stars such as Aqua Simulacra, Polar Star, Skyward Harp, or the Thundering Pulse

This is by far the best 4-star weapon for Tighnari, and it offers a nice mix between ATK, EM, and some extra DMG for the heck of it. As a plus, it’s also craftable, making it accessible to f2ps.

This bow has proved its mettle when tested against the Abyss itself. With a Maximum CRIT Rate boost of 31.2% and Max ATK of 354, this bow will be your best 3-star option for Tighnari. If you find yourself pretty close to an enemy, that 60% DMG boost at refinement rank 5 should quickly dispatch all hostiles near your characters.

Thanks to the communities Math Gurus, we have detailed information on which weapon is the best one for Tighnari:

Altough, it is best to keep in mind that these calculations were performed in controlled scenarios, you should only use this table as a generalised ranking, going for whatever weapon suits your playstyle and account.

Keeping in mind that Anemo characters cannot swirl Dendro, the community has shown preference towards an Electro/Hydro based team comp:

This team revolves around the new Dendro Reactions. Namely, quicken, which buffs your team Dendro or Electro DMG. Attacking an enemy that has been Quickened with a Dendro attack activates Spread, increasing Dendro DMG. Similarly attacking with Electro activates Aggravate, increasing Electro DMG.

For this reason, your team will perform well because of the presence of an off-field Electro applier. Fischl, Raiden Shogun, Yae Miko, Beidou, Kuki Shinobu, and Lisa are all good in the second slot. An extra Electro Character like Kujou Sara could work as she will buff your Tighnari‘s ATK based on her own.

Of course, in your third slot, you could go with Collei, making use of Gilded Dreams passive buff and also equipping her with the Dreamwood set. Sucrose is a viable 3rd slot option as well. She will aid in grouping enemies, swirling Hydro or Electro and providing EM buffs thanks to her abilites.

In your last slot, a healer like C6 Diona may be perfect since her burst provides a phenomenal 200 EM boost to any character on the field. Which is obviously very nice for Tighnari‘s kit.

Have you begun exploring Sumeru yet? What are your thoughts on the new update? How did you like today’s guide? Please let us know if there’s more we should add to this article! Thanks as always for reading! 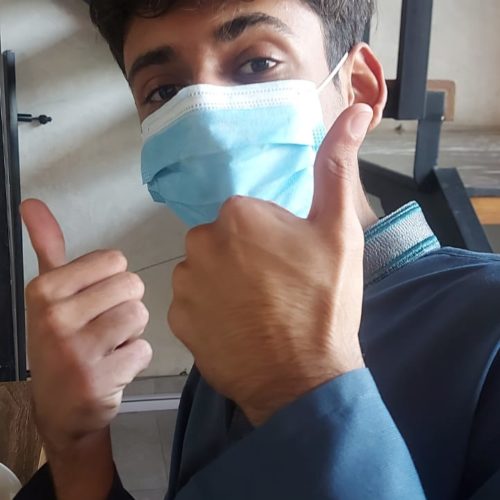 Taimoor
A rookie writer and an experienced player of games. Can be found playing Minecraft, Genshin Impact and LoL. In his free time he writes, plays games, codes, reads books or annoys the people around him.