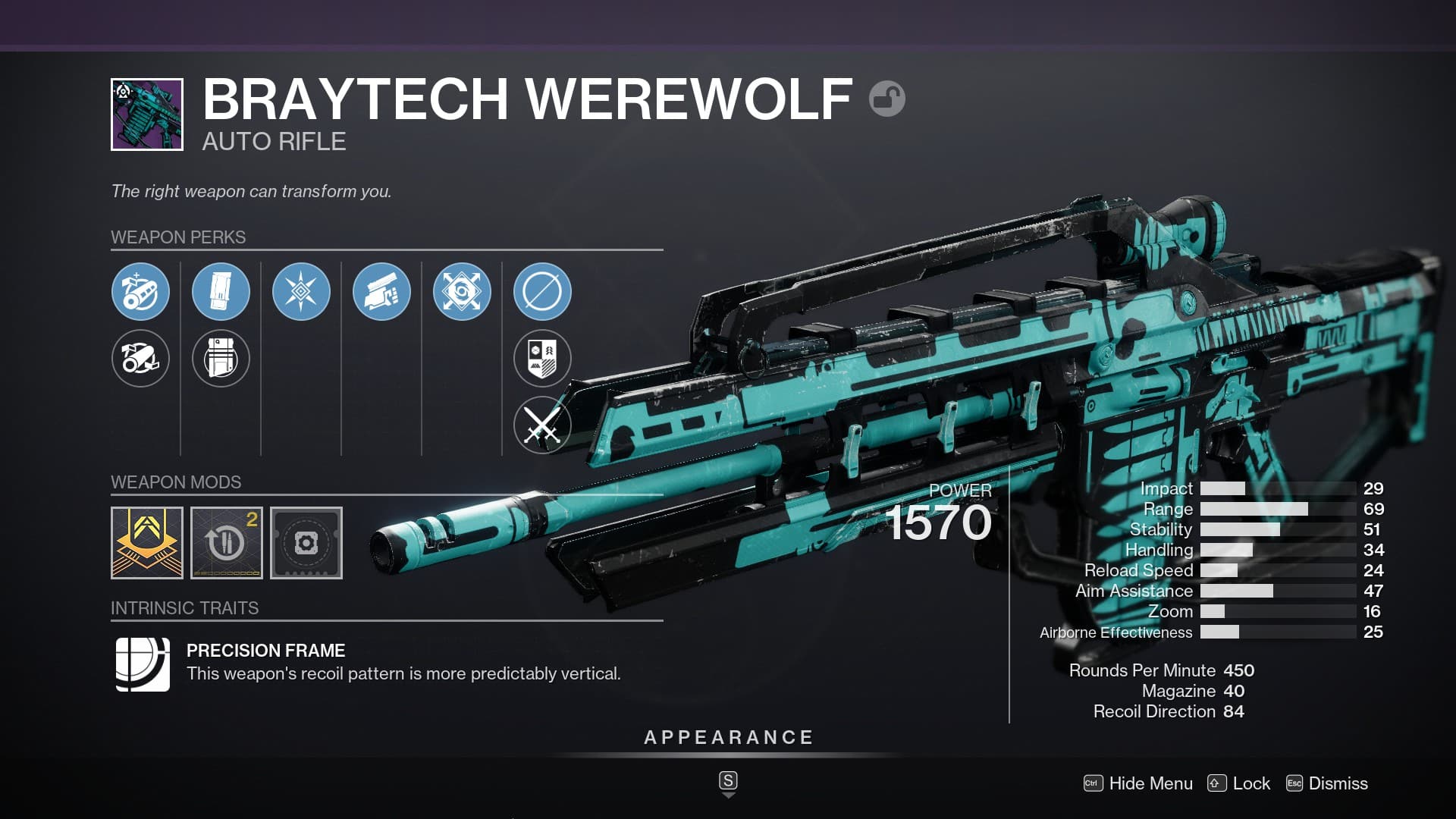 These two Destiny 2 Braytech Werewolf god rolls are surprisingly versatile for a kinetic auto rifle. This gun can fill a lot of different rolls, and doesn’t demand your elemental weapon slot to do so. That’s not to say Braytech Werewolf is a META weapon – far from it. It’s still worth picking up a god roll of it during Festival of the Lost.

I’m going to go over two Braytech Werewolf god rolls. One for PvE, and one for PvP. I’ll break down my perk choices for each individually and offer up some alternative options – just in case you’re not a fan of my choices.

This Braytech Werewolf god roll is as good as it gets for a PvE kinetic auto rifle. Not only does it have the god roll that I’m breaking down here, but it has an alternative roll that I would consider just as good – were it not for another weapon that does that roll’s job a little bit better.

First off, I’m running the combination of Arrowhead Break and Ricochet Rounds on both of these rolls. Arrowhead is an S-tier barrel, and unless we need extra range (this roll doesn’t), then it’s the column one perk you should be running 99% of the time. Ricochet Rounds, on the other hand, is replaceable. There are a few column two perks that give us five range – Ricochet is the best of the bunch. However, Armor-Piercing and High-Caliber Rounds will both also do just fine.

The meat and bones of this Braytech Werewolf god roll is the Subsistence/Swashbuckler synergy. This combination is a common one on PvE AD-clear weapons, and there’s a reason for that. Swashbuckler is one of the best perks in the entire game – with it, every kill we get increases our weapon’s damage for a few seconds, up to 33% at five rapid kills. Each kill you get beyond that resets the perk’s timer.

Typically, you’ll lose Swashbuckler whenever you have to reload. That’s not too big of a deal, but it is sub-optimal. Subsistence changes all of that. With Subsistence, every kill refunds a bullet back into our mag. So, the two perks combined together results in every killing giving us ammo back into our magazine, and a damage buff. You don’t need me to spell out why that’s so strong.

The alternative Braytech Werewolf PvE god roll I mentioned before is Subsistence/Osmosis. I’m a sucker for Osmosis on Kinetic weapons because it means I can run three weapons with three different elements – freeing up my subclass for soloing endgame PvE content. However, given that Osmosis works off of our grenade – Subsistence isn’t the most optimal column three perk to run with it. Compare that to The Last Breath from the Prophecy dungeon, which rolls with Demolitionist and Osmosis. That’s the first every roll I grinded Destiny 2 for, so if you want an Osmosis kinetic AR – hunt that one, instead.

As mentioned previously, I’m also running Arrowhead Break and Ricochet Rounds on my Braytech Werewolf PvP god roll. Ricochet is still replaceable by the other two range ammo perks, too.

Dynamic Sway Reduction is my column three perk choice – and I’m not too happy about that. Subsistence is useless in PvP, and I’d argue the only possible alternative here is Pugilist. If you’re using an auto rifle, though, then you don’t want to be putting yourself within melee range.

Dynamic Sway Reduction will help keep the weapon under control during drawn-out gunfights, helping the automatic stay a little bit more consistent than it otherwise would be. Pair that with Under-Over, which gives us 20% more damage against Overshields, and you’ve got a surprisingly effective Crucible weapon in a META not exactly dominated by ARs.

If you’re not a fan of that roll, there is an alternative in Compulsive Reloader/Kill Clip. You’d normally want Outlaw with Kill Clip, but Compulsive Reloader can work – provided you hit your shots. It gives you faster reloads if you still have 70% of your mag left, and Kill Clip gives us 33% more damage for five seconds if you reload after a kill. So, if you think you can consistently get kills with 30% of your mag, then go for this roll. Otherwise, use Dynamic and Under-Over.

Braytech Werewolf is a gun that does a lot of things well – but nothing brilliantly. It’s a dollar-store PvP alternative to Outlaw/Killclip, and a PvE alternative for Demolitionist/Osmosis. Still, it’s a versatile weapon that’s worth keeping an eye on during Festival of the Lost.